#Project24 rolls along with an important three points away to Cardiff City. There were times that things didn’t go exactly to plan, but as the kinks are worked out in the new Unai Emery attacking system getting results and points are key. Thankfully having two world class strikers can paper over a lot of cracks in a system. 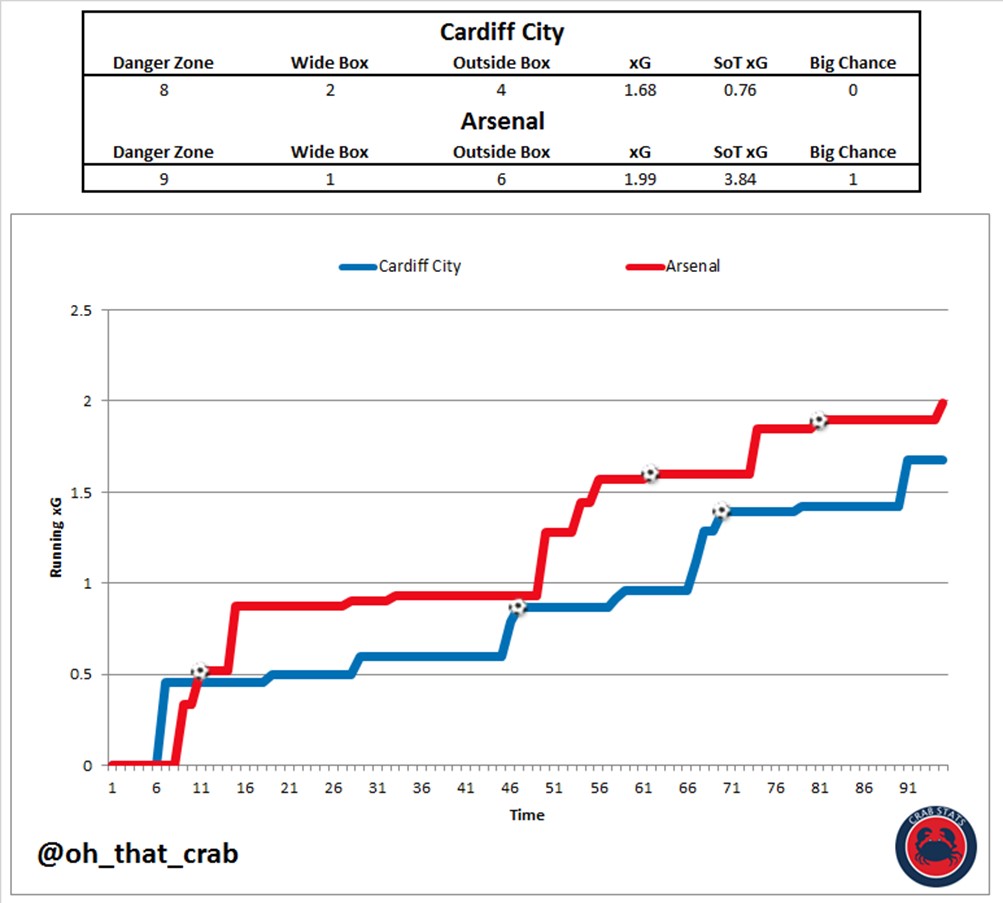 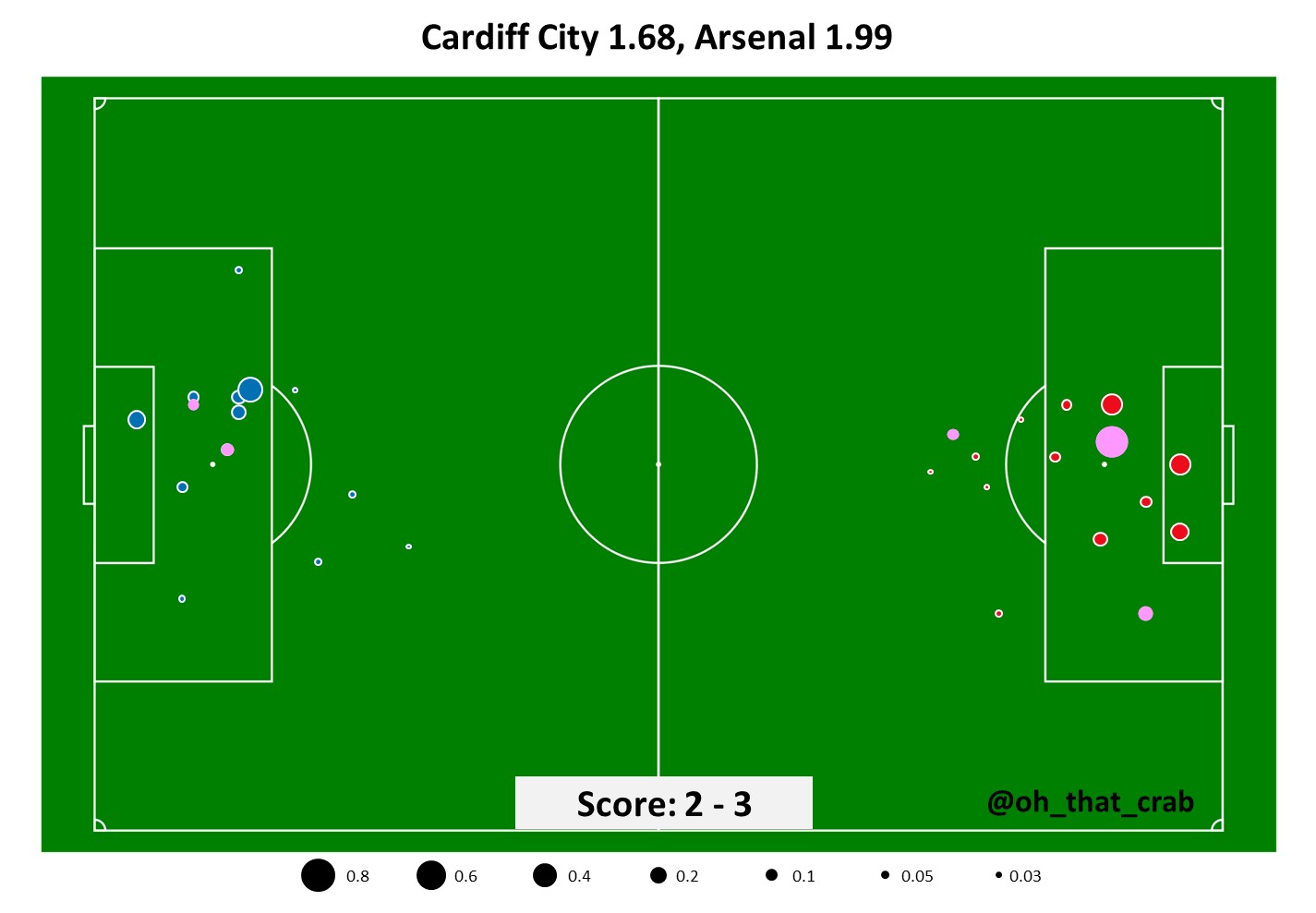 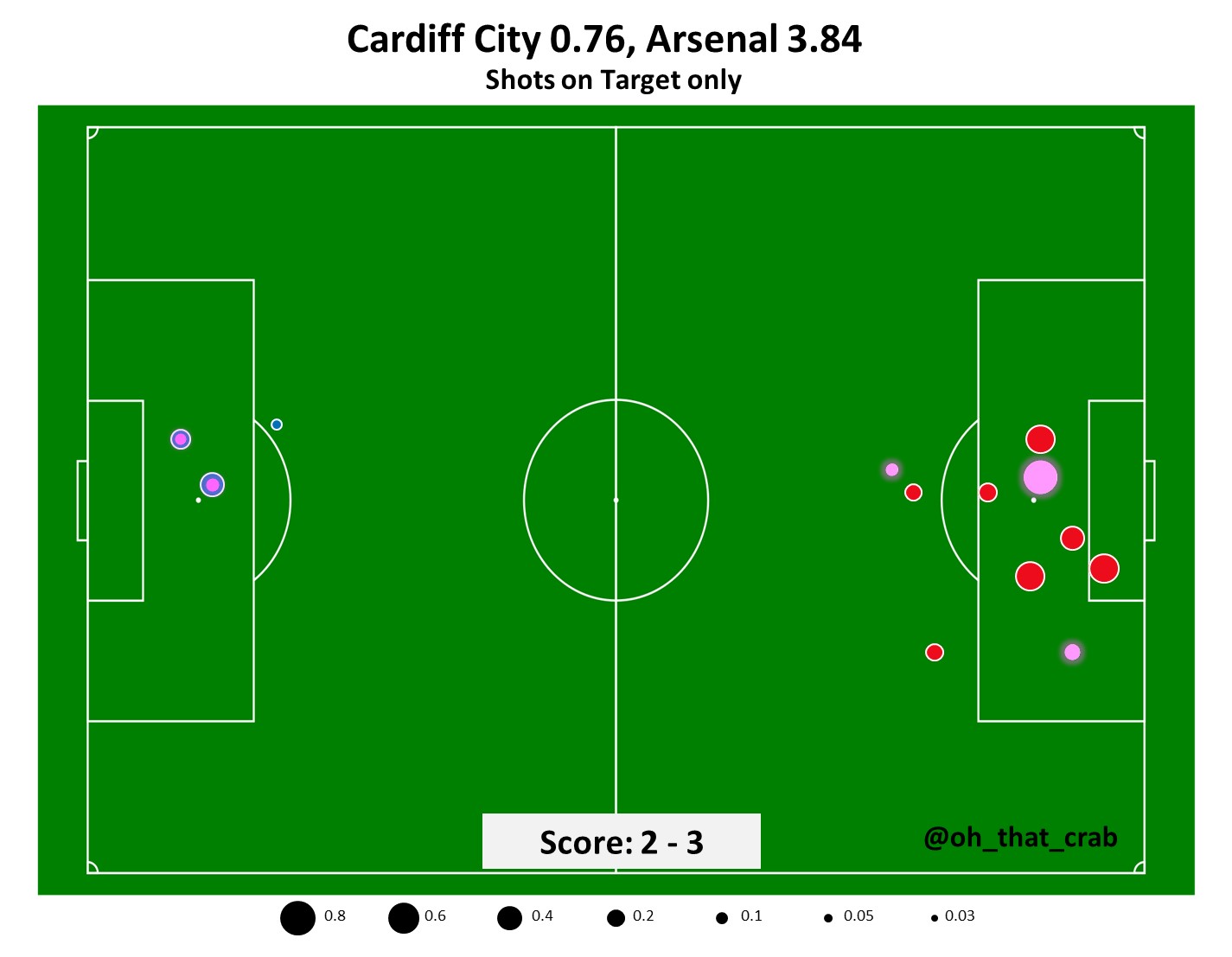 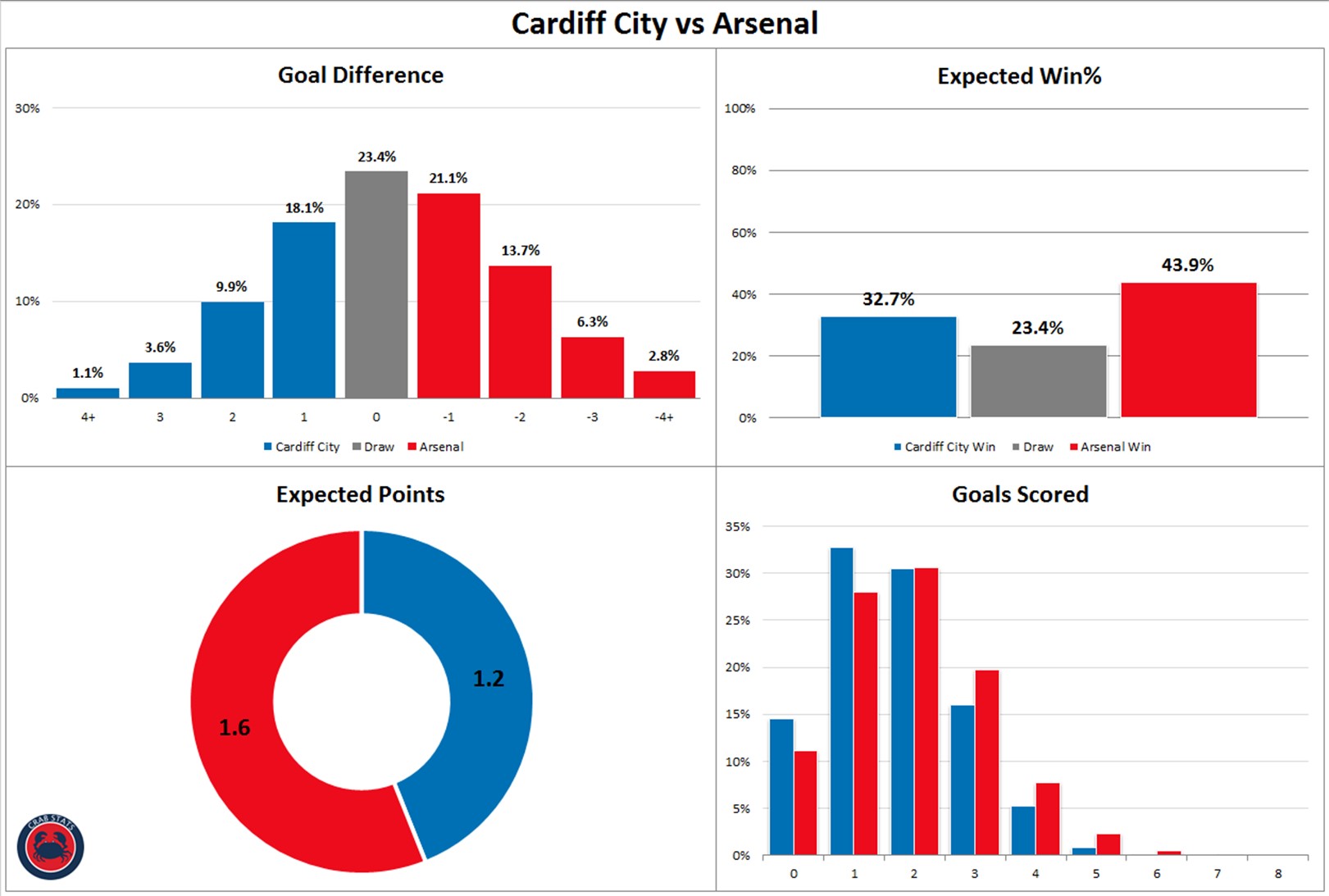 Alexandre Lacazette and Pierre-Emerick Aubameyang got their first start together this season. It wasn’t always perfect but the two players look like they are starting to form a good relationship on the pitch. Overall they were very dangerous combining together as seen for the second goal. Lacazette also did an excellent job linking up with the rest of the team as a focal point in the middle of the attack.

The one worry that I have with the pairing is that this might not be maximizing Aubameyang, getting just three touches in the box and two shots isn’t amazing for player of his caliber. However if Lacazette is going to perform at this level, Aubameyang’s lack of involvement can be overlooked.

Granit Xhaka is a divisive player (putting it mildly). He does so many really good things for Arsenal’s attack but can be so frustrating at times. This is well illustrated in the passing stats from this match, (more information in this in the By the numbers: Glossary) he was far and away Arsenal’s most impressive passer on the day by positive passing value added but also had a number of frustrating passes that put Cardiff in dangerous positions to attack Arsenal. This is reflected in the high value of his negative passing statistic. Overall he was a Arsenal’s best passer on the day (due in part to his high usage) and was again the key in connecting the defense and the attack.

Cech has never quite living up to the supposed ’12 to 15 points’ he was going to save Arsenal when he signed from Chelsea but he has played well most of the time. Yet, as the team adjusts to the new way of playing under Emery, Cech is looking out of place more and more. Against Cardiff City he made two errors that led to shots with his attempts to build out of the back. With Arsenal’s new signing of Bernd Leno from Bayer Leverkusen the Cech’s time in goal might be over.

With all of the above noted, the defense in front of him has not been doing him any favors with the shots allowed. Arsenal have given up 27 shots on target this season, which is the most among the top six teams. Cech has done a better than average job of keeping the shots he has faced out of the goal, but it is concerning that Arsenal have been put into this situation.

Torreira has now made four substitute appearances this season and has looked impressive in the short number of minutes played. Against Cardiff City, he was especially impressive in his 20 minute stint. He brought balance to the midfield and was very tidy on the ball losing possession zero times. He was also everywhere on defense with three tackles and an interception. The more I see of him, the more impressed I am with what he can bring to the Arsenal midfield.

It has to be Xhaka and Torreira going forward. Would like to see Mhki back in the team in place of Lacazette, who was obviously great but I think Auba can do better up top and we missed Mhki’s partnership with Bellerin on the right. Our play was too narrow most of the game.

I’d rather drop özil for micki than lacca but that just my opinion!

Da hell.. if anything Ozil should make way for Mhki..

I have always been of the opinion that picking the attackers is very difficult and any choice comes with trade offs.

I’d like a 433 with Ramsey, Xhaka and Torreira behind Özil Auba and Myki. But ¯\_(ツ)_/¯ anyway you slice it your missing two really good players.

Xhaka was really good on Saturday I must commend. I so love the Lacazette goal that I can’t stop watching and asking the last arsenal striker that could score that and that’s RVP. Lacazette is a fox in the box he is quite different from Auba but I d pick him over Auba all day. He’s every defender’s nightmare. Auba is better when you stretch defenses and we are not doing that now. And mhiki I think should have started as a right midfielder or in Ramseys 10 with Ramsey dropping dip for Matteo. Ramseys best games have come when… Read more »

I love Xhaka, think we have a real player on our hands.
Give Emery a few months with him? And he’ll iron out his deficiencies

Torreira must start, if only for us to see just what he is capable of. He seems capable of being the rear fulcrum we need; his positioning seems good, his passing excellent and his desire to drop back to cover exemplary. He probably needs to be with Xhaka at first then Guen could take over as he develops. Xhaka stats look good but his defensive cover is poor and he just let’s runners go past him. The 6/7 successful long passes is misleading when you consider what came from the poor one (and it was very poor!) Sokratis is so… Read more »

From what I have seen Xhaka was our best player together with Lacazette. They always rate him based on one mistake which is harsh. Missplacing a pass there doesn’t mean we should concede. Vultures are just waiting that he will do something wrong that they can attack him. It is not like Ramsey and Guendouzi never lost it in a dangerous area. They all make mistakes but some players are criticized much more just because fans are not capable of objective thinking.

Ramsey had 4 though. But of course it won’t suit your agenda.

You are right. I missed that Ramsey had more I will make that update.

You may be correct, but that was a very churlish way of putting it.

Starting Guendouzi is the puzzling thing for me. Surely “World Cup tiredness” cannot be an reason for the last two games. It has to be that Torreira’s contract would give his former club certain amount of money if he starts a certain number of games. To be clear, I have nothing against Guendouzi, he’s a great signing for the future.

How much money are you thinking will actually make Arsenal fc refuse to play him, that’s a ridiculous assumption.

A Different George
Reply to  Whocter Do

Here’s an alternative explanation: Torreira arrived late, he did not seem match fit to Emery, he was coming to a new league and a significantly different style. He did not impress Emery in training and in his first appearances made several important mistakes, though fewer each time and with moments of real quality visible. Against Cardiff City, he looked great and, if he trains well and appears to be fit for a full 90, he will get more time after the international break.

I know, it sounds crazy, but it could be true.

How did Guendozi do? Good/bad/ugly?