THE LOWDOWN
Arsenal travel to Bristol City as they look to continue their perfect start to the season and preserve their place at the top of the WSL. The statistics tell their own story for the high flying Gunners, who have scored at least four goals in each of their WSL matches. Reading had only conceded once in their first four games prior to the 6-0 battering they suffered at Meadow Park on Sunday.

The goal difference speaking for itself. +24 after 5 games. pic.twitter.com/acrVm2fNl5

When Arseblog News spoke to Vivianne Miedema after that game (fresh from her third hat trick in seven games), she spoke about Arsenal’s tactical flexibility and the refreshing mix of humility and confidence Arsenal have shown this season. Having a striker like Miedema is certainly helpful with 12 goals from her 6 starts. 86% of her shots have been on target this season.

But Bristol have shown improvement compared to last season, having held Chelsea and Manchester City to draws in this campaign already (they led City 2-0 before drawing 2-2). In Sophie Baggaley they have one of the best goalkeepers in the WSL too. The Gunners will need another serious, focused performance to uphold the form book at Stoke Gifford.

TEAM NEWS
Kim Little, Dan Carter, Viki Schnaderbeck and Tabea Kemme are all out with knee injuries. In terms of rotation, Louise Quinn and Jess Samuelsson could come in, having sat out the last two games on the substitutes’ bench. It’s increasingly difficult to predict how Joe will line his team up. As he told the site earlier this week, he likes a flexible, multi-disciplined squad. He opted to move to three at the back against Reading, we’ll have to wait and see what he has planned for Bristol.

It's no wonder Arsenal Women are unbeaten and top of the League with performances like this ?

Posted by The FA Women's Super League on Monday, 22 October 2018

LAST TIME OUT
Perhaps as a portent of things to come at the start of this WSL campaign, the Gunners ran out 6-1 winners at Bristol back in May in the final game of the 2017-18 league season, Danielle van de Donk helped herself to two goals, with Kim Little, Leah Williamson, Beth Mead and Katie McCabe getting in on the act too.

PLAYER TO WATCH
Sari van Veenendaal picked up a knock in pre-season, which opened the door for Pauline Peyraud-Magnin to start the season in goal. Van Veenendaal has since recovered, but has not been able to wrestle the gloves off the French goalkeeper who arrived from Lyon this summer. In his post Reading assessment on Arsenal.com, Joe Montemurro indicated that Pauline’s ability with her feet has added a new dimension to the team. 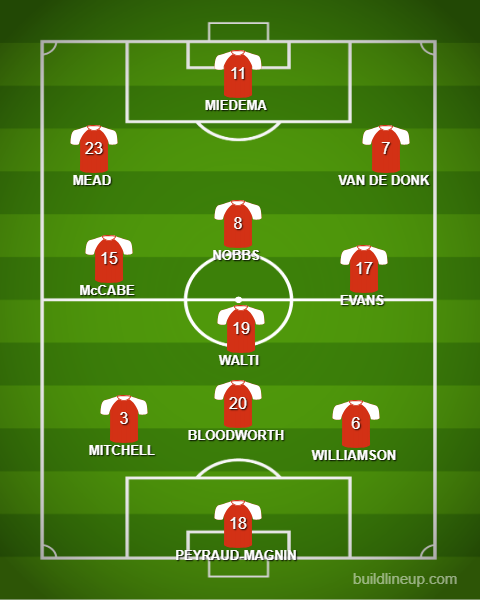 HOW TO CATCH THE GAME
The match kicks off at 3pm on Sunday and will be streamed live on the FAWSL Facebook page. But if you’d like to go to the game, it will be played at Stoke Gifford Stadium and tickets are available on the door at £8 for adults and £2 for U-12s.

Back at the @sgs_college Stoke Gifford Stadium this coming weekend! ?

COMING UP
I won’t be at Bristol on Sunday, so there won’t be player reaction from the game, but there will be the usual Weekly Round-Up on Monday, a full match preview of the Birmingham City home match on the site next Friday, with player reaction on Sunday evening. In the meantime, why not enjoy our interview with manager Joe Montemurro on his new contract here.

Any idea where you can watch the Arsenal women’s games in the US?

I’d suggest getting a VPN and making your IP address in the UK to try the facebook page and BBC website.

The opposition will also have a hard time pining down our line-up. Great job, Joe! COYG

Got to keep the run going, girls!

Tim, question for you – I believe Carter is out for the season, but what is the order in which Kemme, Schnaderbeck and Little are expected to come back into the side?

Dan ought to be back in March. Kemme is training, looks like December for her. Viki and Kim will both be New Year, but Kim might be sooner (first game in Jan). Kim’s was a straight fracture with no complications, so it’ll heal up fine.

Just seen that Reading held Man City Women to a 1-1 draw last night! Fantastic result for us. And also further evidence of how well we did to win so handsomely against Reading.