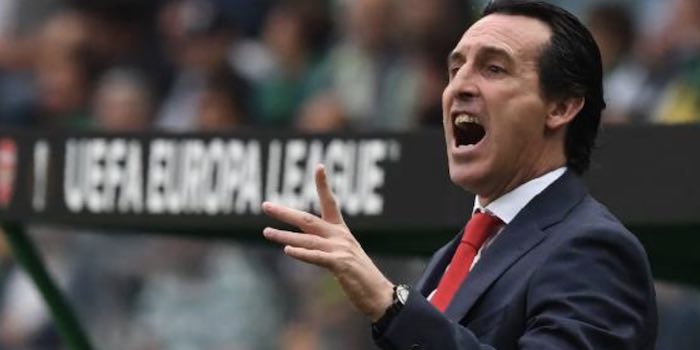 Unai Emery says that Arsenal were deserved winners over Sporting in the Europa League this evening after Danny Welbeck’s late goal gave the Gunners a 1-0 win and their first ever victory on Portuguese soil.

It made it eleven wins in eleven games for the Spaniard’s side, and while he was happy with the victory he expressed some concern over another first half in which his team didn’t really click.

His Arsenal are very much a second half outfit, and that’s something that is clearly beginning to bother him despite this fantastic run of victories.

Speaking afterwards, Emery said, “The match is 90 minutes and different things happened tactically and individually in the game. In the game, the team deserved to win this match, but the first half is not clear for us.

“We could not impose our ideas in the first 45 minutes but in the second half we had the chance and the opportunity to change the result and continue in our way, thinking only to win this match and to improve things in the second half.

“I think we did that in the second half, but we need to continue finding the solution for us to be better in the first halves.”

If he can find a way to make us effective for 90 minutes that would be very welcome, but if we keep winning games until he discovers that secret then nobody can complain too much.

How did the players rate for you this evening? Leave your ratings and comments on Sporting 0-1 Arsenal – player ratings

Knacker out the opposition, bring on the A-Team – tell me this isn’t deliberate???

Looks like a pattern innit?
Saving the likes of Auba and Ramsey for the second halves of Premier League games.

Is he playing coy? I don’t know, but either way if we won I have no complaints.

Sounds plausible but this isn’t the first time Emery has made note of his concerns of starting slow. It’s not like we’re controlling them in the first half, we’re giving away tons of chances. That’s not a plan, and it’s clearly not something Emery is happy with (rightly so),

However we started off losing, then winning but unconvincing, and now looking convincing but only in the 2nd half. Seems like progress to me.

I believe he’s especially concerned because Liverpool always come out of the box flying in the first 20 minutes or so and manage to score multiple times early. They will hurt us if we can’t correct this issue immediately.
Afterwards it’s so much harder to come back and outscore them. I share his concerns because I really want to beat them.
If we don’t get a result the media will come at us again, saying we can’t do it against the top sides…

Even if we can’t do it against the top sides for now, I think we can work on it. So long as we beat all the teams below us, it will still be considered as progress in my eyes. Then it’s just about taking it from there.

I would not be overly bothered if we draw or lose, considering the progress that has been made in less than a year.

ideally he would not like to give chances to opposition in the first half by controlling the matches and come out flying in the second half and blow out the opposition when they are a bit tired and they least expect it. he might not accept that but based on everything we’ve seen its looks more like his tactics. a coach of his ilk cannot keep getting it wrong every first half and right every second half. I remember liverpool vs sevilla in europa league final. this is what happened exactly . liverpool blew them out with scintillating first half… Read more »

Emery you should have removed Mikhitaryan long time ago in that match… You failed me in that aspect…..mikhitaryan was off it… He looked clueless… You made him suffer for too long in that match….he should have been sitting at the back of you in the dugout

I look at a comment like this and I’m reminded that you can never please everyone in this world..

Mkhitaryan was pretty awful to be fair. Guess the reason he didn’t sub him was the fact that he is unlikely to start Sunday.

Ramsey was also poor in my eyes, runing towards team mates paths and messing them up instead of runing the other direction to sspread the opposition

he only played him because he had to, cant see him playing on sunday, he is a sub at best, not a first teamer

I am not too worried about our first half performances. With 11 straight wins it’s hard to argue we have been lucky. We seem to have the fitness and mentality to come through.
COYG

It’s a bit like the mighty All Blacks in rugby. Teams can compete for half a game, before superior skill and fitness come to the fore!

To me it seems quite clear opposing teams have been told to press and press hard and attack from the start against Arsenal. All the teams we’ve played on this run have done this with reasonable success in the 1st half but have found it impossible to keep it up in the 2nd. Emery’s fitness conditioning of the team along with our technical superiority (against these teams) along with a growing confidence and sense of belief rises to the fore in the 2nd halves. This is why everyone’s got their eyes on the Liverpool game. Personally I can’t wait. All… Read more »

Definitely agree, our fitness and Emery’s interesting squad rotation have kept us fresh so far. I wonder if the 2nd half of the season will mirror these 2nd halves of games and that we’ll be physically sharper as the season continues while our rivals tire.

Love the optimism, but worry about Arsenal’s ability to withstand Liverpool pressing to be honest. That’s for another day though. Here’s to a win on Sunday.

Good point. Against Chelsea they needed a near miracle shot from Sturridge, (yes that Daniel Sturridge), to tie. Against MC, Liverpool needed a mistake from the GOD’s of the Manchester City coaching staff by letting Mahrez take the resulting missed penalty. Liverpool isn’t the team from last year, but we still can’t let them score first. They are notorious front runners. This will really be a litmus test for us after this great run.

If liverpool try to take “advantage” of our slow start, they may be in for a surprise. 🙂