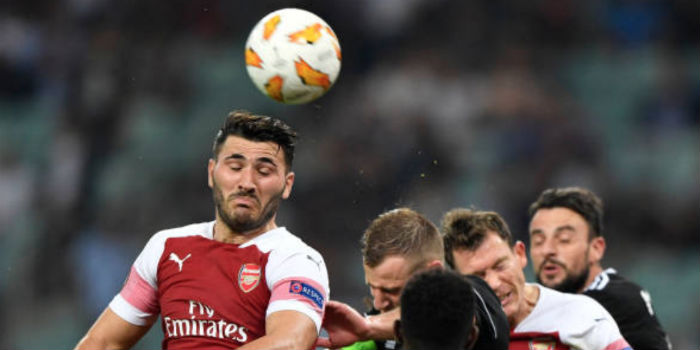 Given his recent return to fitness, it was something of a surprise that Bosnia and Herzegovina didn’t give Sead Kolasinac the nod for their Interlull games with Turkey and Northern Ireland.

According to homeland publication Avaz, it transpires that the left-back, who made his first Gunners appearance of the season in the 3-0 Europa League win against Qarabag in Azerbaijan, asked not to be selected so he could ease his way back to full fitness at Arsenal. The powers that be apparently had no qualms granting his wish.

Kolasinac injured his knee in our penultimate pre-season friendly against Chelsea in Dublin at the start of August and spent two months on the sidelines.

Given Nacho Monreal has had to start every game at left-back in his absence, it’s very useful that Sead has opted for a safety first policy and that his country have played ball. Well done all.

The 25-year-old will be one of 15 first team players to sit out the Interlull. That number had been higher until Bernd Leno got a late call to join Germany’s squad in place of Kevin Trapp.

It’s one of then little trees isn’t it?

Get your tiny mind out of your own Arse.

What an Anne Noying thing to say.

Relax guys. No one knows everything. The willingness to learn is the most important thing. Everyone starts somewhere

Which country are you from out of interest?

Whew. That’s a relief. Last thing we need is our left back developing a nasty carpal tunnel flareup from all that pruning.

When Emery joined I remember there being a lot of chat about which players we were hoping he would improve, and he seems to be working his magic with the likes of Iwobi, Bellerin etc, lets hope Kolasinic can be next. Monreal won’t last forever!

If he becomes more aware of runners on his blind-side, he’ll improve by leaps and bounds. He has all the other attributes to be a top, top left back

Thank you for that observation. He has a significant weakness with blindside runs, which is as a result of his lack of positional awareness. I’ll be shocked if that can be corrected but let’s hipe so. Regardless, left back should be #1 priority next summer.

Thumbs down for reminding us Nacho won’t last forever

I actually thought he had an alright game in the Eufa. Considering he had just come back from a few months injury. Don’t think he suited the Wenger style of play very much, pass, receive, pass. he doesn’t have the technical quality. But he might be suited to a more physical style of play that Unai seems to want us to play. Al la Kyle Walker for City.

If we don’t use wing backs, I’m not sure if he’s a good enough left back. Says something that Emery used a 3-4-3 system when we started with Kola, and I suspect it was because of him. He looked amazing going forward, but became suspect defensively when we went back to a 4.

Part of me would like to see him further forward, like the 4-2-2-2 we used against Fulham, but not sure if he’s technical or dynamic enough for it.

So what? Chamakh was in the Ligue 1 TOTS before he joined us – doesn’t automatically mean that the player is great…

I actually like Kolasinac and believe he will come good but I have never understood why his TOTS inclusion is used as an argument against his poor form.

This might just be the best comment section on the entire internet. No single digit IQ rants, loads of humor and usually very useful high standard comments.

Good man, Sead, for sitting this one out. Work your way back slowly but safely to full fitness and become the tidy player I saw in you when you first arrived here.

He will need to work up to speed quickly.

We need him to get back to his early form for us. Maybe a bit of confidence issues but the talent (and raw power) is clearly there.