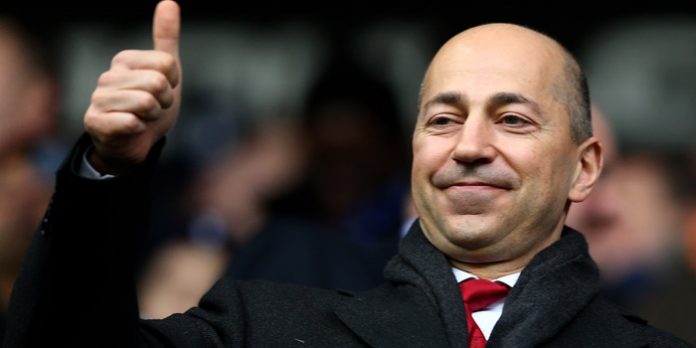 Ivan Gazidis has officially left Arsenal after almost ten years as chief executive of the club.

The 53 year old will take up his new position at AC Milan at the start of December, and he marked his departure with an email to staff thanking them and wishing them luck for the future.

Here’s what he had to say:

It’s been an amazing privilege to be able to be a part of the journey these past ten years. We’ve lived many ups and downs together and you have all achieved so much in modernising the club in every respect and positioning it for an even brighter future.

I am so excited to see what that future holds for all of you. I am your biggest fan and supporter and will always be following and cheering you all on from wherever I am. You can achieve anything! And you can do it while keeping and advancing the club’s strong progressive values.

Thank you to each and every one of you. I know what you give every day and how much you all care for this wonderful place we call the Arsenal.

His role at the club has now been split between two men. Raul Sanllehi, the former Barcelona Director of Football, is Arsenal’s new Head of Football, while former Commercial Director Vinai Venkatesham is now Managing Director.

The pair spoke recently about sharing the duties and responsibilities, with Sanllehi saying, “This is a modern organisation. This is only one organisation.

“We are two leaders. We have two different areas which are very compatible and not separate. He is going to be participating in most of my decision making, the same way I’m going to be with him.

“We both have offices here in Colney and at Highbury House, we’re neighbours all the time. We’re going to be working together. We have our areas of expertise.

To put it in a simple way, he’s off-field, I’m on-field. We can work very well and have already done that before. We know each other for seven years … I don’t foresee many areas of conflict.”

So, we’ll have to wait and see what kind of duo they make. Will it be dynamic, like Batman and Robin, or the boardroom equivalent of Silvestre and Squillaci?

Hopefully that is the last photo of that Yoda looking mofo I ever have to see again.

Good luck and thank you for all the good stuff you did for the club, bye

Do you know, I’d already forgotten about him.

Off you fuck con man, a great day for The Arsenal. More deadwood out of our great club.

Difficult task to bring success to the club given the previous great success, the new stadium etc.

Imo, he wasn’t enough of being the boss of the whole club, which is what a CEO, especially one paid so much, is supposed to do. We didn’t go forward on the pitch or commercially as much as we could have under his reign.

So he won’t be missed a lot, particularly if the new bosses perform well, do things that affect the success on the pitch and we start winning again.

Not that that makes any great difference. But it is a fact.

Then this time next year he’ll be 55. That’s how it works.

He will be 55 much before next year. That’s how it works.

I didn’t realise Auba was that old! He’s doing very well for his age.

Living up to the name, Pedant

May your new team rival the likes of Bayern Munich. Don’t let the door hit you where the good Lord split you.

Don’t forget to close the door on your way out.

This news is devastating. I just don’t know how I’ll have the strength to get through the day. How will any of us continue on with life?

Onwards and upwards! It’s strange how many of us, myself included, thought the club would struggle without him but while he did get us through the years paying off the new stadium, I think more has gone wrong than right and hopefully the next few seasons confirm that.

What this tells me is if you say something long enough, it will come to pass. Remember when it was #WengerOut and #GazidisOut……

I guess it’s time to blow the horns on #KroenkeOut

Mesut O'Neill
Reply to  Unai are meant to be together

Rams aren’t doing too bad with Kroenke at the helm. So perhaps he isn’t the big evil monster that is portrayed

end of an era

I thought he went ages ago.

Ten years from now AC Milan will be exactly were they are now….or slightly worse offf, and this clown will be rich as f*ck.

It’s do sad…I can only find one of my socks.

Dear Leader,
Thank you for the great job you did in growing our commercial revenue. And for courage you showed in always fronting up to the media and fans during the final years of Wenger’s Arsenal.

Will not be missed.

Given the changing of the guard, does this mean Wenger is free to write his memoirs (without having to worry about undermining those in charge)?

Arsene Wenger held him back from achieving great things at this club.

We can argue on that, I’d say not getting enough commercial income or supporting/challenging Wenger means it is the other way around.

Grow up Monkey Nuts. He was the Chief Executive Officer who allowed Arsene to take all of the flak, all of the time. His job was to lead and he failed. Good riddance Ivan, leave by the back door you fraud.

Gazidis is a smooth talker, should have been a politician, he has the art of talking without actually saying anything completely mastered. Unfortunately he didn’t back up his words with any real results, and He’s left a bit of a mess. Ozil £300,000+ pw Wilshere = Free Rambo = Free? Welbz = Free? Koscielny = Free? Monreal 32, I’m a big fan, but he’s at an age where we really need to be looking at a replacement, and we’ll get nothing back for him Cech = Free Lichtsteiner 34 Allowed Wenger to keep Alexis with £60 mill on the table.… Read more »

Those who know won’t talk those who talk don’t know.

Without Wenger this man would have achieved precisely f**k all. He is being paid shed loads of cash by Milan to turn their financial situation around, but without AW’s ability support the stadium move and to keep AFC in the top four whilst selling on players such as Toure, Nasri, Cesc, RvP, Adebayor (circa 2007-13) etc he would have no achievements to show from a decade of otherwise total mediocrity.

Squillaci… Dark times. How did we ever finish top 4?

“thanks for nothing Todryk”

makes me wonder, Squillaci and Silvestre, have they ever played for us together?

Anyone else slightly worried that he’s gonna try and poach Emery, Mislinat, and Sanllehi?

No, but he’s going to poach Arteta from City, so it’s not all bad.

I think we are the absolute perfect club for a super scout like Sven. Richer clubs want to buy ready made star players. Poorer clubs won’t pay him as well as we can.

Hell no, they’re de-facto in charge now. They probably knew about this when they signed on.

Aaron Ramsey on the other hand…

Would need a large pan.

Wasn’t all that bad was he

He did do some work for us

Just by the mere mention of Squillaci you’ve given me a headache.

New guys. We need Banega. A defender, Torreira in midfield and that lot up front?. We’ll be going places.
Up The Arsenal!

Sometimes, i want to express myself with an emojicon , hello blog, how do we signup to emojicon

Thanks for the effort bye.

Meh! Vanilla and unremarkable to the very end. AC Milan fans must be thrilled at the prospect of you decorating their stadium – your good at that. Can’t think of anything else we got for our £25 million.

Didnt he bring in the new manager? He has a good eye in that respect.