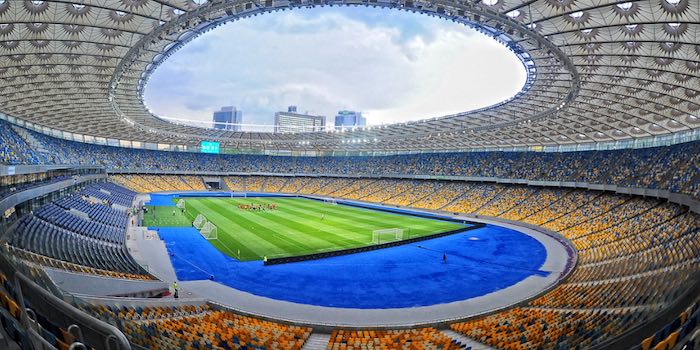 Thursday’s Europa League clash with Vorskla Poltava has been moved to Kiev after the Ukrainian parliament voted this week to impose martial law in parts of the country.

Tensions in the region are high after Russia captured three Ukrainian ships on Sunday, taking 24 men prisoner, adding to an already delicate situation between the two nations.

In a statement issued this evening, UEFA said:

“The emergency panel has today taken the decision to relocate FC Vorskla’s Europa League group stage match against Arsenal from the city of Poltava, following the introduction of martial law into certain regions in Ukraine.

“Uefa will continue to monitor and assess the security situation in Ukraine in the coming days before making any decision on potentially relocating other matches.”

The game which is scheduled for 17.55 on Thursday evening will now take place in Kiev’s Olimpiyskiy Stadium.

Had it gone ahead in its original location in Poltava, some 350km east of the capital, Arsenal faced a four hour road journey after a three and a half hour flight.

With the North London derby on Sunday, Unai Emery was likely to select a fringe squad for the journey anyway, but perhaps a slightly easier travel situation might allow him to add a few more senior players to the travelling party.

We’ll have all the team news tomorrow here on Arseblog News.

This is actually good news for the club as it’s a slightly less distance to travel and also safer but wonder what it means for travelling supporters. Doubt there would have been too many but even still, there must have been some who were willing to travel to Vorskla.

2b Frank
Reply to  Niall Shannon

A shame for the fans that has already paid for their hotel for two nights. Ah well who are we to complain, the people of Ukraine have a lot more to deal with than my tivial issues. COYG’rs!

I read that Poltava has an airport primarily used for charter flights. It’s a moot point now but I did wonder why with all the resources the club has they wouldn’t take that route.

The airport is apparently in the zone that has martial law and I read that Arsenal were refused permission to use it. I’m sure the club would have preferred that, but although it’s a huge upheaval I think it’s better for the players in Kiev. The pitch at least will be better, and I was concerned about our team travelling for three to four hours in a coach. The only issue is that the decision to move should have been made earlier so that fans from both teams could have made some arrangements instead of being stranded and out of… Read more »

I thought the flight time would be longer. Even better news!

And what about the fans flying into kharkiv and having to drive 7 hours to kiev in very difficult weather..football is not just about the players on the pitch..luckily I’m flying into Kiev so my plans are not completely messed up but I’ve got friends forced to do the 7 hr drive

The tripadvisor reviews for Poltava were the deciding factor.

Hopefully, traveling fans can still get refunds on their hotel reservations (24 hours is the usual cut-off). Otherwise, this is good news for Arsenal. Safer (hopefully) and much closer. Really hope Russia’s Ukrainian provocation doesn’t continue to escalate.

Gotta be a good thing avoiding a four hour road trip!!! It more than halves the overall journey time ?