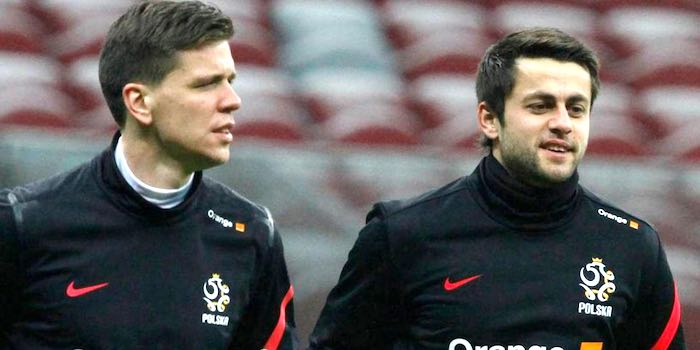 You might have seen some quotes doing the rounds today, but thanks to Reddit user Kozajsza on r/gunners here’s a video of Wojciech Szczesny and Lukasz Fabianski.

In it they do an impression of Arsene Wenger, recall a horror moment for Carl Jenkinson and some confusing instruction from then then goalkeeping coach Gerry Peyton.

Neither of the two Poles were fond of the former Irish international’s methods and Fabianski in particular made it known that his presence at the club was part of the reason he wanted to leave.

He’s since enhanced his reputation greatly with a spell at Swansea, coincidentally he spent a year with Unai Emery’s goalkeeping coach Javi Garcia, while Szczesny was chosen by Juventus to replace the legendary Gigi Buffon.

Like both of them, thought Szcz should have been kept.

Not sure laughing at the club all through the video helps me like them more though.

I never felt like they were laughing at Arsenal, more at the goalkeeping coach who left. We should have kept Szcz, great keeper and a proper Gooner too!

I don’t think there was anything malicious in the laughter towards the club, but they both definitely had issues with Peyton

I didn’t hear anything good about anyone in the club. Some balance would have been good, given that they have done well from their association with Arsenal.

Chez practically cried about missing Arsenal at his own Juve reveal. What else do you want?

And because of this, so should we really. I don’t think Fabianski was ever going to be good enough but Chesney will be the one that got away

I though he was the one and only?

Sounds like Peyton was a clown. What else do you do but laugh?

But the fact Wenger still wanted to hang on to Peyton is alarming. We all talk about when Wenger releases a book, what will he say, but it’s clear many players have their own stories to tell about our fabled and infamous coaching.

Yes, we should “analize” all our coaches.

(see subtitles in the video)

A proper analrapist such as Tobias could have been helpful during that period.

Now I know why we were called Arsenal.

Unbelievable! This stuff did happen at Arsenal. You just cannot write this up. No wonder Szczesny never improved!

I bet Boro Primorac was an unintentionally hilarious guy. I always thought he looked grumpy. I was wrong

Well, thankfully the club made an overhaul in the coaching department.

Blogs, I can’t get this to load. Can you post the link?

Comes over as a lack of class.Peyton fair game for criticism,seemed like mocking Arsene,I hope it wasn’t like that. I always liked these two.

I imitate Arsene all the time, it’s not malicious or in disrespect. If anything I am repeating the audible tells of a man I spent 22 years listening to.

Indeed. If you can’t laugh at Arsene you never really loved him.

Complete lack of respect. Totally unprofessional to mock a former coach, even if they had issues with him. Glad they’ve gone.

Not really though. These guys are professional footballers being given sub standard training and coaching by the sounds of it. Everyone else was laughing at us by the end of wengers reign.

“By the sounds of it” says it all really. And the guy making the sounds is the same guy caught smoking in the dressing room. I am not at all convinced Peyton is rubbish at his job, and no fan really has any way of knowing that to be honest.

I agree, they have 0 respect for Peyton.

But it sounds earned(or not more to the point)

He was obviously pretty shite at his job. If anything the fact that he called all the keepers to a meeting just to single out Szcz and criticise him could be seen as bullying.

These are two great keepers that I’d love to see still at Arsenal. I mean, Szczesny improved so much at Roma with different coaching that Juve got him to replace Buffon! That’s how good he could have been with Arsenal if he wasn’t held back by Peyton

You’d call that bullying? I love Szcz and I’m gutted he left us, but he was a cocky shit sometimes, and tbh that was part of why I liked him. But I can imagine he might need to be taken down a peg from time to time 😉

Fabianski, Szcesny and Vito really improved once they moved to other clubs. It’s obvious they didn’t get good training at Arsenal.

This is hilarious. How did Gerry Peyton keep his job for so long?!?!

What a frigging joke!

As much as i love and respect Arsene Wenger for being who he is and what he did for our club, i equally feel let down by the stubborn loyalty he bestowed upon some of the sub-standard ex-coaches at Arsenal. How could he not have seen the decline in their quality of work over the years?

It’s well probably that Peyton had old methods and should’ve been replaced earlier, BUT in this video it’s not evident for me: If you think about it, “Hazard tries to shoot to the other corner you go” it’s poorly said, but he means Hazard tries to look out the keeper and then goes to the other corner. In other words, Szcz should not go early. Actually a good advise. And the video with faults is strange, but maybe Gerry had a feeling that Woj is over-confident and doesn’t work hard enough. Again, he should have said it in another way,… Read more »

That’s an embarrassing revelation but I suspect the same was true of the defensive coaching in general.

Really wish we’d not let Szczesny go. Time will tell where he ends up, but early evidence suggests he’s improving consistently and will continue to do so.

The comments here about them being disrespectful to the club are misplaced and excessively partisan – in my opinion.