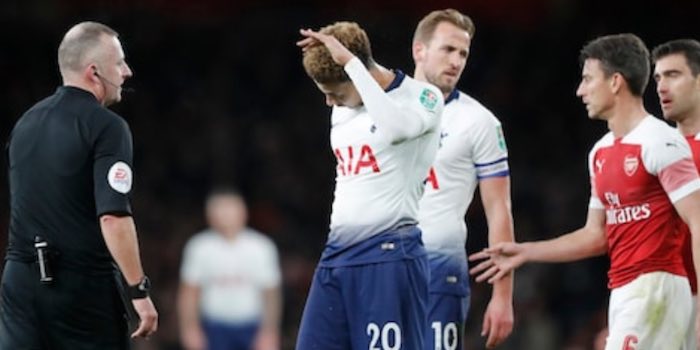 Arsenal have released a statement to say that the club have been embarrassed by the fan who threw a bottle at Dele Alli during the 2-0 defeat in the Carabao Cup last night.

The Sp*rs midfielder was hit in the head midway through the second half, and regardless of whatever rivalry exists it’s an action that nobody should condone.

The club are working with police and reviewing CCTV footage to identify the idiot in question, and today posted an official response to the incident.

We have all been embarrassed by the individual who threw a bottle at Dele Alli during Wednesday night’s match against Tottenham Hotspur.

Behaviour of this type has no place at Emirates Stadium and after analysing CCTV footage, which showed him leaving the stadium after throwing the bottle, we have identified an image of the suspect. We are liaising with the Metropolitan Police and investigations continue in order to apprehend the culprit.

We are not responsible for the actions of one individual, but send our apologies to Dele Alli and everyone at Tottenham Hotspur for this incident.

We do not tolerate any anti-social, discriminatory or violent behaviour at Arsenal Football Club. Anyone identified will receive a lengthy club ban and their details will be passed to the police to commence legal proceedings.

Credit to the club for this – they’ve addressed it very well and it would do other clubs well to take heed when their fans are involved in unsavoury incidents.

It comes in the week that a Tottenham fan was fined £500 and given a four year ban for throwing a banana skin at Pierre-Emerick Aubameyang.

They should throw the bottle at him! Is quite embarrassing though in all seriousness…

They will certainly throw the book at him.

I’m quite embarrassed as well. It should of been a brick.
*Disclaimer* I do not condone throwing bricks at Dele Ali. Bricks are valuable pieces of stone masonry and are wasted on Sp*rs players skulls.

It was the boy from arsenal fan tv the one with the funny head,I saw him I’ll testify

They’ve all got funny looking heads, you’ll need to be more specific?

I don’t agree with throwing things at players, but honestly I think Dele Alli might just be the most hated player in the PL. Ask a fan of any team to name a player they hate, I bet they would say him. It’s like when everyone used to hate John Terry.

What do you mean “used to hate John Terry”..?

I think he means when Terry was relevant

I’ve always thought Fernandinho and Fellaini were just as hateable if not more.

Good one. We all love a good Derby and all but this shithousery from some idiotic fans has to end

I was at the game last night. While it was an impressive throw as the guy must have been 15 rows back and Alli was a moving target – I felt slightly embarrassed and uncomfortable when it was greeted by a cheer from the crowd.
While I naturally detest Alli, Anyone should be able to go about their job without fear of physical assault. Except boxers though and any other fighters as without the fear of violence, I imagine their job and the spectacle for spectators would be quite boring.

Its not really assault when you willingly step into a ring. Exception that proves the rule

Impressive throw? You don’t seem to really disapprove it. You are just hiding behind some sort of disclaimer.

Nope – Genuinely disapproved, but was trying to put a light hearted spin on it, as I do hate it when comments sections descend into venomous slagging matches. I find a bit of humour in any post can minimise such vitriol..

It is embarrassing. I’m all for hostile crowds but there’s a line.
That said players have a responsibility not to cross a line either, a bit of winding up is one thing- blatant provocation completely another

Nothing wrong with provocation, the permanently offended generation needs to grow some thicker skin.

What does the ‘permanently offended generation’ have to do with fans at a heated derby game?

When Dier scored and celebrared in front of our fans, did our fans need to ‘grow a thicker skin’? What a rubbish gammon talking point.

We all found it hilarious when Theo did the 2 – 0 hand gesture to them while being carted off on a stretcher… so Alli doing it to us doesn’t;t offend me, but it does make me want Torrera or Sokratis to go full Vinnie vs Gazza on him in the next game…

Despicable hobgoblin that he is.

I’m just gonna come out and say it. It was wrong and these is no place for it but it was hilarious. The crowds reaction was hilarious. Nobody was hurt. If the response to what happened to Aubamyang was a £500 fine and 4 years ban, nobody can argue when that fan gets a similar punishment. The target couldn’t have been a nicer player in my opinion.

It’s not the point, I get that, but I have to say I’d rather be hit by a banana skin than a bottle

The banana skin is a political statement the bottle just tells Alli that he’s a cu*t, and I think we all agree on that.

Should be a longer ban than the Spur’s fan. Why? We are a classier, bigger club.

Standings are temporary. Class is permanent. I’m fine with a permanent ban.

Both we’re wrong but given the context of the incidents a longer ban would signify that racism is the lesser of the offences…which it is certainly not.

It wasn’t such a great throw, as Ali has a massive head largely made up of grisltle, horse dung, and turmeric.
Probably.

Rather than hurl a bottle, next time put your energy in getting behind the team.

I got your point, but was that really a bottle? I thought I saw a plastic water container? Unless I’m mistaken, but if Alli was hit by a real bottle flying at that speed, he will definitely black out. Having said that, the prick who did that should be seriously punished to serve as a deterrent to others like him. No to violence in sporting events (especially football).

“Plastic water container”… more commonly known as “plastic water bottle”. I dont care jow much i or anyone else dislikes Alli, nobody should be throwing anything at the players on the field. Hope Arsenal cracks down on this idiocy.

I’ll be honest….I laughed. It was a moment of madness on my part and I’d like to apologize to all I’ve offended.

Fans should not resort to such poor behavior! Unacceptable!!

That being said….
There was a tiny part of me that went, mwaahahahaa

Suspect the fan in question will not only get a ban but larger fine than the racist who thew the banana at Auba. I even read Pochettino suggesting we should play games behind closed doors, what an utter prick, he’s really trying to become the new Mourinho isn’t he?

I thought he told his players to push and shove and waste time for the last 15-20min of the game. Pretty dirty if u ask me

Seen as how one of their fans threw the banana skin maybe their grand opening of a stadium can be played behind closed doors.

Actually he said that Arsenal should not be forced to play behind closed doors. He added that because of one idiot, all other fans should not suffer.

Well done most of the comments below. No team is without it’s share of angry followers; often they turn their anger on their own club. The sad thing is that banter has been replaced by hate. We are segregated from each other more like Northern Ireland than North London. I’d sooner share a pint with some of the guys below than some of our own idiot fraternity. A full bottle of water thrown down from about 30 feet could have had unfortunate consequences if it had done real damage. Of course some of the Ali haters (who wish he wore… Read more »

While Ali is undoubtedly a talent, I think a lot of the hate directed at him isn’t cause we want to see him in a red shirt.. He just really does come across as a giant prick.

Everything else you said I agree with.

I saw who it was. It was Wenger abusing another bottle. Nothing to do with Alli, he just had to make it all about him as per usual.

Isn’t it supposed to be, “Victory Grows Through Harmony.”

As a sidenote, I am really surprised by this comment, as reported by the BBC, from Pochettino: “In another country the player was going to be down on the pitch. Dele behaved really well. Arsenal should be grateful to him because the player could have gone down and created a massive problem.”

Could have gone down and created a massive problem… when he actually wasn’t hurt? What a saint for not doing that! This clarifies certain things about that team.

Who else is hoping that it was DT who threw the bottle?

The only thing that hit the target all night.

“Embarrassed” … read “appalled” and “disgusted”. “We are not responsible for the actions of one individual … ” … Well you weren’t until the best you could muster is “embarrassed”. Dele Alli is a bone fide c*nt. Always has been, probably always will be. He dives and postures and preens himself in a way that no decent person ever should. BUT nobody should be open to having a bottle thrown at them no matter who they are or where they are. Anything other than the most extreme repercussions for ‘fan’ and club is the only thing to end this kind… Read more »