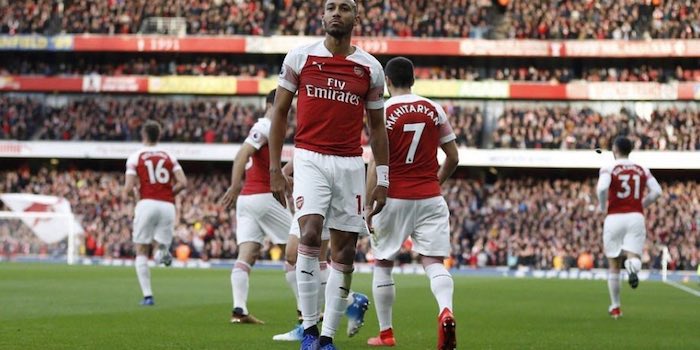 The Sp*rs fan who threw a banana skin at Pierre-Emerick Aubameyang has been banned from football for four years and fined £500.

At a hearing today, the magistrate decided there was a racist element to his actions, and imposed the sanction, saying, “We find it was a targeted gesture to throw a banana skin after a goal was scored by a black player.

“We have in the circumstances found the racial element was there.”

The man in question denied any racism, saying it was simply a spur of the moment action due to inflamed passions, but the courts have decided otherwise.

And ahead of the Carabao Cup quarter-final tomorrow against the old enemy, Arsenal have released a statement to address fan behaviour.

This fixture always generates an exciting and passionate atmosphere, however we recently saw incidents where a small minority of fans have behaved unacceptably and unlawfully.

We appeal to both sets of supporters to get behind their team tomorrow in positive and respectful ways without any discriminatory behaviour.

If you witness any form of offensive chanting or discriminatory behaviour at the game, you can report it to a matchday steward or use our ‘See Something, Say Something’ service by texting FOUL to 67777 together with a description of the incident and location.

While the recent focus has been on other clubs and the behaviour of their fans, we’re not immune to some nasty chants, particularly around this fixture and use of the word Yids to describe Sp*rs fans.

Comedian Ian Stone addressed this well in a recent radio show, clip below:

‘That sort of casual anti-semitism is part of the problem’

With Chelsea fans back in the news for the wrong reasons, listen to @iandstone tell @DickieLee about an exchange he had at the comedy store last week..

Leno: My job is to prove I’m the number one every week

Pedant
Reply to  my name is bob

All of their fans have a life sentence.

Tiny
Reply to  my name is bob

Banned from football for 4 years. Should be banned from Tottenham for even longer… ?

It’s ok. It’s not like Tottenham play football so he won’t be missing much.

Hantal
Reply to  my name is bob

Iceberg10
Reply to  my name is bob

Should be a lifetime ban. Very disappointing.

If you want to tie society of this sick way of tree resting fellow human beings give a few life bans and make examples of these people. No one deservres what happened to Auba.

If this guy was a gooner and had thrown his banana at a tott black players would say the same,life ban.

As Auba said, ” Four years and we started again”.

An Arsenal fan who threw a plastic bottle towards the Spurs players after they celebrated their 1st goal received a 3 year banning order and something like a £650 fine. Not condoning what he did but surely racial abuse deserves a far bigger punishment than what the Arsenal fan got.

Should have been given a few months in prison. In one action he committed racism, littering, and attempted assault by trying to strike Pierre with the banana skin.

Surprisingly very little on this in the media.

They prefer to highlight Sterling or some other team.

Should of made a bigger example of him. Football needs to kick this type of racial motivated action right out of the game. He’s old enough to know exactly why you don’t behave like that but he did it anyway.should be banned for life the scumbag.

A spur of the moment…

i am paranoid i know but about a week ago, i noticed all news reports on this started saying “a football fan at Arsenal’s Emirates Stadium, who threw a banana skin…..” and notably not saying the word Spurs anywhere.
perhaps i need to get out more!

How about the fine should be the amount of money he would save over four years of not attending Spuds “football” matches?