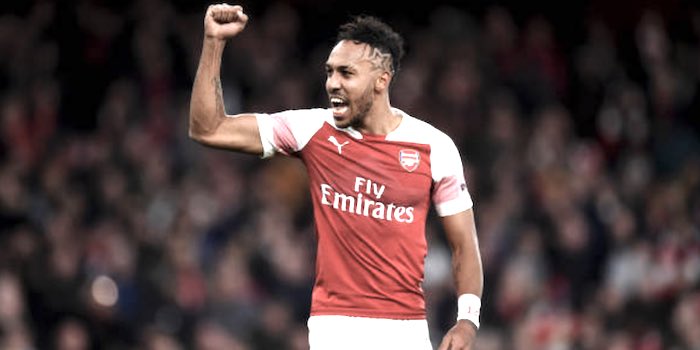 Pierre-Emerick Aubameyang scored twice as Arsenal came from 2-1 down to beat Sp*rs 4-2 at the Emirates this afternoon. Mike Dean’s homeless goblins had been awarded a penalty for a dive, but couldn’t cope with Unai Emery’s half-time changes as Aaron Ramsey and Alexandre Laczette changed the momentum.

Read the match report and watch the goals here.

The striker spoke to Sky Sports after the game, this is what he had to say about the turnaround and how the crowd helped the team on the day.

Auba 4-2 down, how did you turn that around?

We did a great first half, but after the first goal we conceded and we had a moment where we were a bit down, but at half-time we were confident. We spoke, and we knew we could do it in the second half, and we did.

With the fans and the atmosphere, we have power, we felt strong and we went for the win.

Yes I think so. We can see always our second half, we play very well. We don’t give it up, that’s the mentality.

The most important right now is to continue this series of winning games, we are unbeaten and we have to keep this run going.

Best result/performance of the season so far?

I think so yeah!

Absolutely love it when red flares and smoke go up.Come on native gunners !!! Make that place a fckcing panzer for opponents.

What a finish on the second one. Sensational. This team is starting to show serious metal

they need a lot of mettle to show their metal

The NewChapter
Reply to  Toure motors

If his second goal didn’t give you an #ORGASM, then you have reached #menopause.
Up the ARSE!

What a striker. Just give him all the Lamborghinis he needs

I’m proud of everything today. The player’s fight, not having it from wanker Spud shithousery. For the first time in years I felt the players properly knew what the fuck this was about. WE WILL NOT FUCKING LOSE! Even at 4-2 we were HUNGRY in the tackle aggressively defending, ready for a physical confrontation, almost angry even. No slight on Arsene at all as he was great in the 1st two thirds of his reign in this fixture but Emery has to get credit for the change in mentality. It was palpable. The fans need credit too. Absolutely superb support,… Read more »

Wat is more disgusting than spurds?

Watch out St. Totteringham day is around d coner

Good man Auba……great performance.
What with so much going on I thought I’d offer a quirky yet beautiful thought………..towards the end, Xhaka stayed on his ass after a Winks (reminds of Dier) foul, who sprayed smelly spittle down on the back of Granits head from above enraged by the unfairness of it all.
Such is Emery’s influence, instead of reacting with a head butt or something, Granit just ignored the little foul mouthed prick.

Had Kola backing him, put winks in his place, Sissoko too. Both looked scared seeing a beast coming at them..

The only sad thing moving forward is that man city are buying the league title, take them out of the equation and things would be really interesting ?

There is a TH14 swagger in the way Auba scores..

Lacca has been great for us. Still, I want Auba playing in the centre. Both have to start as they are so important to us but shunting a world class striker to the left hurts. In the middle, Auba will easily score 30 goals without breaking a sweat in this team. A WCS should play in the centre of attack!

Scored most of his PL goals from the left and they showed again that they can play together. I trust Emery to keep them both happy and motivated

Ramsey was excellent. And to be fair, the sight of him giving Spuds shit from the sideline in the first half made me happy. I really think we are making a mistake letting him go. Great team performance through and through

Ramsey’s been brilliant in his conduct. He’s already a legend here and a PL, Europa or CL would only be a feather in the cap for him with us. His journey with us so far has been extraordinary and he’s an inspiration to many out there.

I’m sure he’ll get big offers if we let him go and it may turn out to be a win-win. I trust the management to do what is right for the club. I have been pleasantly surprised with Guendouzi and Torreira.

days like this, it’s good to be a gooner!

I lost both of your goals !
The first one to streaming lag
The second because I could not stop my piss.!!!

It was a great win for us today. Good one there auba

Ok, it was very good and enyojable but now we got to prove ourself against the BIG teams.