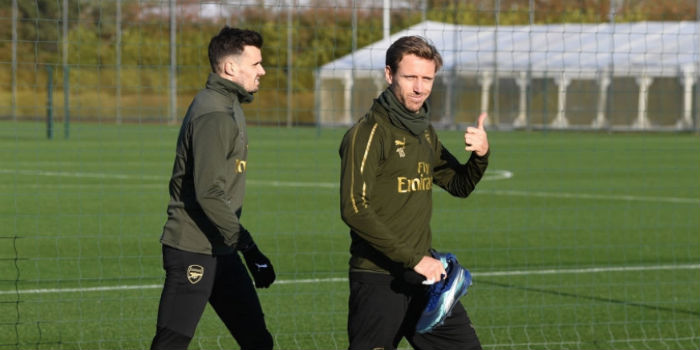 Unai Emery expects Nacho Monreal to sit out Arsenal’s Boxing Day trip to Brighton after picking up a muscular problem during the 3-1 win over Burnley.

The Spaniard, who missed six weeks between October and December with a hamstring problem, started the game as the left centre-back in a 4-3-1-2 formation but limped off on 37 minutes. Unai Emery sent on Stephan Lichtsteiner in his place and subsequently switched to a three-man backline.

Asked in his post-game press conference what had happened to Monreal, Emery replied:

“It’s starting to be a muscular problem and we decided to change and not take more risks with him. But I hope it’s not big and I hope he can be with us next week.

“I don’t know if he can play at Brighton, but we can play, I think, Koscielny.

“Also Mustafi is close to coming with us. We can take more injuries but we can also recover more players.”

Koscielny, having featured in three consecutive matches, was given a breather today, while Mustafi has a slight hamstring problem also wasn’t risked.

Potential vicious circle with defenders coming back too early and getting injured again.

Let’s hope that we get a few back and into form e.g. Kos so we have stability at the back again.

This has been a huge part of our injury problems over the years, too many small injuries that can’t recover in time

I miss Mustafi.
I don’t care what anybody else says.

‘Makes a ridiculous challenge’
Says to the ref: ” I got the ball’ ? oh Mustafi

Right Ref and you’ll get a nice red card for Christmas.
😉

We need our strikers to be on top form against Brighton and Liverpool. Hopefully Bellerin, Mustafi and Monreal are back for Liverpool. In a way it’s good that both are away games. We can’t afford to be complacent. If we manage to consolidate our position in the league in the next 3 games then we can take advantage of the fact that all other top teams except Chelsea will have a tough time rotating when CL knockout stages start. If we beat Liverpool and Liverpool drop points against City then the league is wide open. For now, one game at… Read more »

It will be very nice and important for us beat Liverpool, not so much for getting into the title (this season is too early) but for the top 4 race – even that is quite tight as all the top 5 are playing well and even Man U look like getting into the act. The other main reason for wanting to beat Liverpool is, any season any team looks like they are very strong and dare to dream about going the entire season unbeaten, we have to ensure that it comes to an end. That would be the show of… Read more »

I know that Liverpool look very strong, and that Man City has stumbled recently, but I find it hard to believe that there will actually be a title battle into April. I believe we are not far behind Liverpool in quality, though not yet in system and consistency (give us Van Dijk and we are the better side). I don’t think it will happen, but I would not be stunned to see us contending for a place with Liverpool. But, we are–as everyone is–miles behind the quality in depth of Man City.

TOGooner
Reply to  A Different George

I can agree that Liverpool have problems with depth when compared to City, who are ahead of them in overall quality. I also don’t think Liverpool is a team that will go unbeaten this season. Form and injury (compared go other top sides) have favoured them first half of season. But truth is we are well and truly behind Liverpool. I mean honestly when did we have a team last that could keep pace with this world class city side?? U have to go back to Invincibles. To be better than this Liverpool is to be Invincibles again, and not… Read more »

sambo
Reply to  A Different George

I think we shall be fine in the defence department. The worse days seem past us here. People will recover and come back in time for the matches with good match fitness. What we lack, IMO, is defensive coordination.
If anything we should invest this transfer season on getting a really good winger and a good midfielder to rotate the squad and next a top notch, VVD / Ramos type defenders with commanding presence.

Unfortunately most other teams attackers seem past us too! Defensive coordination was coming with Holding and Sok but now lines are wavy and crosses deep. Best of Kos is passed and worst of Mus is too frequent.

Need two centre halves in January window, one experienced and one with potential to step in (from Championship team somewhere?) . We’re at the stage of the season where we have no throwaway games to blood youngsters (after Blackpool anyway).

Montreal didn’t start as the left back Blogs. He started as a center back. We had Kolasinac

The Gooner
Reply to  The Gooner

My bad! Monreal not Montreal

Norman House
Reply to  The Gooner

My bad what? I really do hate that phrase that has crept into the English language!

The Gooner
Reply to  Norman House

Unfortunately we don’t teach grammar here on this platform

Patrik Ljungberg
Reply to  The Gooner

Yeah, that is a pity indeed.

The guy could be from anywhere in the world. English outside and actually inside the UK is heavily Americanised. Can’t blame a kid growing up in South Africa or Singapore or whatever learning English via US-dominated media networks.

Why not
Reply to  Tim

We want our language back. E’re brexit innit

It sounds like you’re saying grammatical and usage errors can be blamed on the Americanization of media. If so, that’s quite a bold claim. Care to offer any support?

Just for education’s sake, South Africa uses UK English. It’s largely because you lot colonised us haha, no joke… We can still all agree than American English is pure horse shit.

Here’s some American English for you: Go fuck yourself you limey prick!

If only history was an accurate predictor of the future.
If only historical figures could be drafted into a leaky defence ahead of Anfield.
If only the Palace performance yesterday could inspire all teams.

Don’t worry….i just see us getting something from anfield..if not three points then one point…but to be honest i don’t see us losing.. We might be having defensive crisis.. But I know Emery has something up in his sleeves for that Liverpool game.. He is a tactician…i believe in Emery

There’s only so much tactical magic you can perform considering the deck of cards in your hand. Rotation for BHA will carry risk. Lichsteiner may not be able to sustain though performances so close in proximity due to recovery rate for an older player. Koscielny is also off pace. Probably if I was to hazard a guess, Granit will be asked to continue filling it at lieft side of back 3. At very least there is an element of continuity there instead of shuffling the deck again and creating more unknown issues. Sokratis will hold in the middle (preferably without… Read more »

Bellerin will miss the Liverpool match, unfortunately. The club said he’s out until at least January 12th.

Think monreal seems to be struggling physically these days. He’s been a great player for us but perhaps this summer we need to look at a more consistently fit, younger, replacement.

I mentioned it last season, he won’t be with us much longer. Positionally, he has had some poor moments too that some fans choose to ignore instead preferring to believe he is water tight. Kolasinac instead got a lot of flak from same fans who said he was not Arsenal quality and wanted rid of him just like they want rid of Ozil and Granit and Mustafi. These people do not live in the real world. Players improve and players also age. Our issue is just as much we are carrying a lot of older defenders. Koscielny is on last… Read more »

He’s good in a back 3 tucked in with Kolasinac doing the bull runs further up field.

Particularly if against Liverpool with pacy assets, he may be needed.

Selection for BHA obviously with a very sharp eye on who should start against Liverpool. Defensively we are thin on choices. At present bc of Cback scarcity, prob best to go 4 at the back but counter intuitively, 3 at the back may be more secure without Mustafi and Holding. It also provides Kolasinac and AMN more lattitude to push forward and make discernable impact. BUT Koscielny is still off pace likely so there is risk there. Lichsteiner will play second match in 3 days at tender age of 34. Its and old backline ready to be exploited, and not… Read more »

Maybe “a slight hamstring problem” is what causes Mustafi to periodically dive in recklessly? Like maybe his hamstring just suddenly spasms, launching him into a tackle against his will?