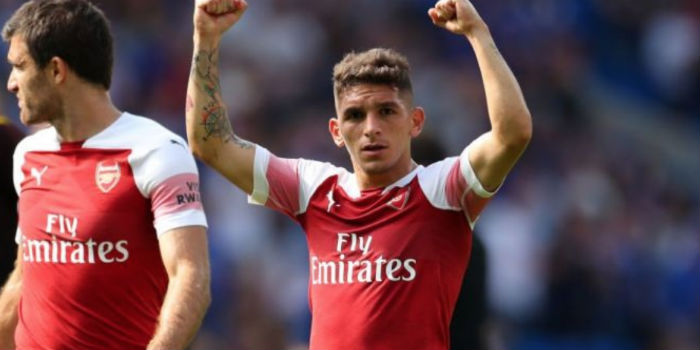 The prospect of a one-game ban will not affect Lucas Torreira, according to Unai Emery, who is weighing up whether to start the influential midfielder against Brighton on Boxing Day.

Should the Uruguay international pick up a caution at the AMEX Stadium he’ll earn a one-game suspension, which would rule him out of the Gunners game with Liverpool on 29 December, for hitting the five card mark before the mid-way point of the season.

“I don’t know if Torreira can even play cautiously, but I don’t want him to think about the possibility of a suspension against Liverpool for one yellow card,” Emery told Arsenal.com.

“I don’t want him to think about that.”

He added: “We are going to play [with] full [commitment]…the same three points are in Brighton that are in Liverpool.”

To ensure the 22-year-old is available for the trip to Anfield, Emery could make the tactical decision to bench the midfielder on the south coast, however, when you consider our ever-lengthening injury list – we appear to have eight players out of contention for the Brighton game – it seems an unlikely course of action.

For the record, Matteo Guendouzi is also one game away from a league suspension having also picked up four yellow cards in the Premier League.

The Frenchman already missed our 1-1 draw with Liverpool in November after picking up a red card in the Carabao Cup, here’s hoping he doesn’t make the same mistake this time around.

With our luck he will get injured anway, so no need to worry about a one game suspension.

Do not play him against Brighton..it as simple as that…we can’t take that risk… If we are serious about the top four then we should have enough to get three points without torriera…damn it for God’s sake…

If we drop points at Brighton it’s not because we weren’t playing with the best dm in the league.
11 players in a team, Brighton shouldn’t trouble whomever is in to replace torreria.

Also emery is right if he is being literal. A win vs Brighton = 3 points and a win vs lpool = 3 points.

But come the end of the season lpool dropping 3 points and us getting them could mean the difference between top 4 and not.

Sorry, but I don’t think we re competing against Liverpool. They are playing for the titile, we for top 4. So even if we beat them, it doesn’t mean more to us than beating Brighton. Only ManC and, perhaps, Spurs would shake our hands in gratitude.

I have this sneaky feeling that Liverpool unbeaten run will end this year .

Like seriously??….so we can’t beat Brighton without torriera???…..is that how low we have fallen???…… Like seriously lord bendtner?

Well we couldn.t beat them last year without him

I agree, while we can’t take Brighton lightly the simple fact is that we need Torreira if we stand any chance at Anfield. Could go w something like this against Brighton

You really want to drop Xhaka?

Good point, I would drop Guendouzi for Xhaka. Then against Liverpool I’d go with midfield of xhaka-Torreira and Ozil as a 10.

I agree,I think Rambo is more effective on the wing than anywhere else

Now that mkhitaryan and welbeck are out…we surely need a winger…get me one between Pepe, almiron and monito Vargas….. We badly need a winger right now……. Fernando calero isn’t a bad defender though…he is very calm… He plays like a more experienced holding

Cengiz Under… keep that name

I’d go for Sarr, he’s much cheaper then those other players, but fast as lightening, can beat a man easy and get to the byline for crosses all day long. He draws fouls like crazy because other players can’t keep up as well. We’ve got some leverage too, as his club wants Martinez.

We will get someone you never heard about and who will be 10x better than those on your list. In Sven we trust ?

I remember thinking after he scored against the spuds and he took off his shirt, that we may rue that action. needless getting a soft yellow like that but cant blame him for getting carried away.

What’s done is done, but I hate that kind of celebration. It’s selfish when you think about it, not to mention odd.

Ideally we can sit him vs. Brighton.

Aye it is completely bonkers. I can think of very few other walls of life where removing ones clothing is considered a socially acceptable expression of joy.

If i scored for my beloved club i’ll drop my pants as well while celebrating.i’ll probably run nude.

I didn’t say it should be penalised, but since it is, it’s a selfish (and stupid) way to celebrate.

To be fair to him he did tell Robert Pores he would take his shirt off if he scored…at that point someone could have warned him it would be a card… sadly he didn’t do the same after his Huddersfield goal!

Should have taken a yellow in the last game.
Or i would rather play him in this match and get 3 points then not. Because getting even a draw at Anfield will be difficult.

He didn’t start at Burnley because Burnley are quite direct and Torreira isn’t the best at headers. He is also way better when the play is in front of him.

Not sure how Brighton play but Torreira will be the exact type of player we need for Liverpool. Wouldn’t be surprised to see him saved for that game.

When will the press run the “emery’s yellow card shame” headline?

The 5 yellow cards rule is wiped clean on 31 December so hopefully Torreira can avoid a yellow before then. I don’t think Guendouzi is one yellow away from a suspension though, he isn’t on the list on the FA website anyway – http://www.thefa.com/football-rules-governance/discipline/suspensions

Did see Matteo on the PL site yesterday– with ‘4’.

Use the ‘By Club’ drop-down:
https://www.premierleague.com/stats/top/players/yellow_card

Good call; I stand corrected. I guess the FA website hasn’t updated since his yellow against Burnley. Never really noticed before but he seems to like a booking, 8 so far this season; 4 in the Premier League, 3 in the League Cup (2 in the same match), and 1 in the Europa League.

Football is a team game.No doubt he is a terrier,the person who steps
up must replicate his playing style.Of course not 100% at least 90% will do.

I’m perturbed if Emery’s not! I know it’s same 3 points on the offer for both matches but I’d rather torreira’s available for the pool match.
Hopefully if he starts we make light work of the first half of the Brighton game, he survives same half with a 2-3 goal cushion without a card and he’s subbed off….
I can only dream!

The great thing about the epl is any team can beat another one
unlike the other leagues.Brighton will come charging like greyhounds and
try to unsettle the gunners .
It s up to Emery to prepare the gunners unlike his predecessor
whose predictable style led to big losses nd even losses against lowly teams.
Coyg , Beat Brighton and Pool wont relish facing us though the defence
must be cohesive and kick any ball in dz danger zones far away.
That’s what happened in the OT and Saints games.

Let’s focus on 3 points at Brighton, then worry about Liverpool.

The best thing would have been he get a deliberate late yellow card against Burnley or an earlier game l, that would have him suspended in one match and then totally available for Liverpool.

Is blogs on holidays or what?