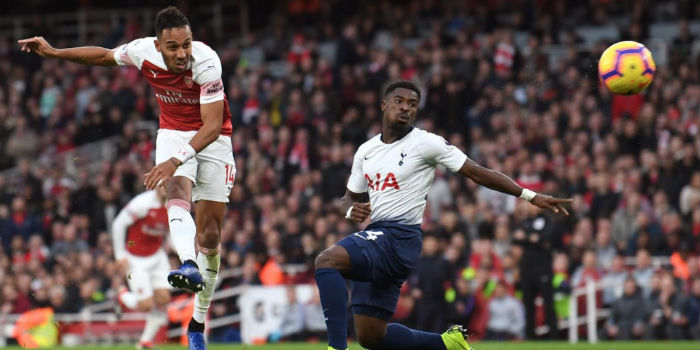 Aaron Ramsey hailed Pierre-Emerick Aubameyang’s match-winning quality after the Gabon international scored twice and grabbed an assist to help Arsenal to a 4-2 win against Sp*rs.

The striker opened the scoring from the penalty spot inside the first ten minutes and then grabbed a vital equaliser with a superb first time effort from outside the box to shift momentum back in favour of the Gunners.

To cap a superb man-of-the-match performance the 29-year-old then set-up Lucas Torreira who killed off the game with 13 minutes remaining.

After the game, Ramsey, who grabbed two assists off the bench, went so far as to compare Aubameyang with the club’s record-goalscorer Thierry Henry.

“It [his second goal] was unbelievable but he does that in training all the time.,” he told Arsenal.com.

“He just eases the ball into the corners but with pace as well. It reminds me of Thierry Henry’s finishes, so he has that in the locker. He’s been fabulous for us.”

He added: “I think it was important for us to score that goal. Then you could really feel that the atmosphere was electric.

“That really helped us to get over the line and win convincingly in the end.

“I’ve been here now for many, many years so it means an awful lot to me and the fans as well. I’m just glad I could play my part and we can all go home happy tonight.”

Sent on as a half-time substitute with the score 2-1 in Tottenham’s favour, Ramsey knew he had to make an impact.

Reflecting on the instructions given to him and how he implemented them, he explained, “I was trying to play in between the lines, trying to pull the team forward, turning in little areas and we have some strikers who are in great form at the moment.

“It’s easy to pick out their runs and most of the time they put the ball in the back of the net. I’m happy with the way that I performed and the way that the team performed as well.”

Agree totally, I put a comment on this here last week!

Sorry to be a pedant 😉

Sorry mate, but ‘athleticness’ isn’t listed in noteworthy dictionaries (Oxford, Collins), and ‘yourdictionary’ doesn’t actually give a proper definition, I think it’s more of a reader-contributed site where anyone can define a word. Besides, grammatically Arse City Blues is correct, it should be athleticism. No offence ✌?

What a time to be an Arsenal fan. Now let’s take this show to Old Trafford! COYG

You have to think after a game like this that the players are smelling blood with Moaninhos chain gang lol.

Great performance by Auba today run them ragged and was a threat until the dying minute they keep saying he doesnt do it against top teams . 2 goals and 1 assist today in NLD!! Love him.

Spu*s aren’t a big team though to be fair ?

Ramsey should definitely stay, if this isn’t proof of him “fitting into Emery’s team”, I don’t know what is.

Would it be too much to ask to put the deal back on the table?

I’ve not been a great Ramsey fan due to his love of ‘Hollywood’play. However based on today’s performance, I think Emery would actually be able to bring out the best in him. Ramsey is well suited for the high energy game, just needs to stick to the game plan.

That’s the sad thing about it – Emery has a place in his system for a player with Ramsey’s exact profile.

But the fact is there was an offer made and Ramsey and his team didn’t sign it. And there’s too much young talent within the club and across Europe for any one player to keep Arsenal hanging.

I love what Rambo did today, but Arsenal made the right call and they should stick to their guns.

I don’t agree. I think we withdrew the deal because of how much we are giving ozil and mkhy.

As good as ozil occasionally is he isn’t consistent enough for emery and certainly wouldn’t have been an asset today. Sadly no one will take him as no one else will pay him 350k a week

Yeah okay, but it doesn’t matter what Ozil or Mkhi are on. We still made Ramsey an offer, and he didn’t sign it in the expectation there’d be a higher offer.

With a new head coach who’s so good with young players and with super-scout Mislintat in the backroom it was a strategic error from Ramsey’s team (if he really wanted to stay, which we shouldn’t assume considering he’s spoken about wanting to play abroad like his mate Gateth Bale).

Rambo has certainly played himself into our starting lineup for Wednesday, I think it’s unlikely he’ll stay now, but i’d be delighted if he did.
If we could get him believing in this project? Maybe he’d be willing to lower his demands?

If anyone’s to blame it’s not Ozil or Mkhi’s big contracts, it’s Young Torreira & even Younger Guendouzi. They’ve integrated so quickly that Ramsey’s not really needed at DM anymore, and is now competing strictly against other forwards. Even a soldier like Elneny isn’t needed for League games anymore.

“Ozil’s contract” is not the answer to every problem we have at the club.

Not the ANSWER to every problem, but certainly a problem.

Agree. But he’s gotta be tired. Ukraine on thur. NLD on Sunday. Man United on wed.

Hope he has some gas left in the tank. We need him.

Think he and the team did ever so well todsy.
I’m sure he’s delighted.

Ahhh the obligatory troll with a non comment. Cute

Ramsey gets interviewed after hugely contributing to a win, Arseblog reports on it. Hardly any obligatory piece.

Ramsey is an interesting option as an inside forward in this setup, leveling Fraser for most assists (6). Will be interesting to see if there´s any development in his contract situation over the season.

We should do everything to keep Rambo. A first class performance from him today and he has done well every game he has played. Given the cost of genuine class players he would represent a bargain. Should we sign him and it don’t work out then we can at least sell for decent money.

At present he’s leaving but the way he’s conducted himself since then really should make us think twice. He’s class and in the right system like the second half he would be incredible

we had someone named Sanchez?! Was probably dirty ?

food for thought
Reply to  Chidi

sanchez is a great goal scorer. wait, i mean scorer of great goals. great goals are rare. that’s why he’s not scoring. think he’ll end this season with around 5-6 goals. those would be great goals though.

All that talk of the sp*ds new-found spine..

food for thought
Reply to  myrtle

PEA was the guy we expected today, a first class striker on a good run. But no matter how one feels about Ramsey, we have to give him props for that performance today. Perfect substitution. Lots of energy, and even seemed at bit chippy!. Great steal leading to our third goal.

Surely it would cost more to replace a player of his caliber than to pay him the wage he wants? I get we don’t want to break the structure but I’d love it if we kept players who have grown up at the club and know its values.

Pierre emerick aubang it into the back of the net.

Goohah
Reply to  Ya gooner

the second goal reminded me of Ljunberg and Henry combi, just like the number they are wearing.

Today marked the first day that I ever thought we should sell mesut and keep Aaron.
Footballing wise, mesut locks us into certain formations and tactics.
Aaron is vastly more adaptable, and although isn’t the maestro mesut is, he isn’t exactly jenkinson either.

However the PR side of things means we would never reverse the situation.

Hey now.. could we use another standard for sub standard? The Corporal is a proper Gooner! Maybe a Sylvester or Chamakh or something?

food for thought
Reply to  Deerish

sylvestre is great… just not at defending. he’s great at swimming. cos he looks like a fish.

Ramsey was brilliant today. I used to love him but now I’m not so sure. But it wasn’t his performance but his attitude that was so outstanding. I know comparisons are a bit silly but the fact Mesut wasn’t even at the ground says a lot. He can’t cope with being told he isn’t playing. And basically Aaron can. That says a lot to me about how the two of them deal with adversity. In the next 3 years I am not expecting an outstanding season from Mesut. And it’ll cost us 50m quid…

Stay Rambo !!! You love this club and we need you here.

Pardon my French but I’d fucking love him to stay. Ramsey is a quality player, loves the club as well. Made a big difference again today.

We should keep Ramsey and sell Miki and Ozil – if that’s even possible. As much as I love the German, Ramsey fits the Emery’s style and tactics far better.

Wasn’t really sure what kind of player we were getting in Aubameyang as hadn’t seen him play too often, I knew he was fast and finished well (with all the goals he scored at Dortmund), but also heard things about his attitude not being the best and not being a team player. I have been so impressed with him as a player, but even more so as a teammate and team player. He goes wherever asked without complaint and unlike someone like Sanchez celebrates his teammates’ success as much as his own. When he doesn’t start he doesn’t sulk or… Read more »

Actually it’s as simple as this……
Ramsey played perfectly.
Sometimes he gives the anti people ammunition, but yesterday he was sublime.

Harry Kane who? Auba top scorer with 10. MOTM for me. Superb stuff in the second half where as first half he was a bit too forgiving. That goal was simply sublime. Fantastic ball from Bellerin and Ramsey’s graft to find Auba who unleashed the curler leaving Lloris statuesque. Gaffer made a brave call to put two strikers up top in a 3-4-1-2. Ramsey made a difference, he looked up for it and knew what the derby meant. In fact well done all the players. They showed a real hunger and fight today to get to every ball and we… Read more »

Rob Holding on Twitter a day before kick off: NLD loading
After the game : Loading failed.. Bcoz your opponent left the match.
Couldn’t find them too Rob