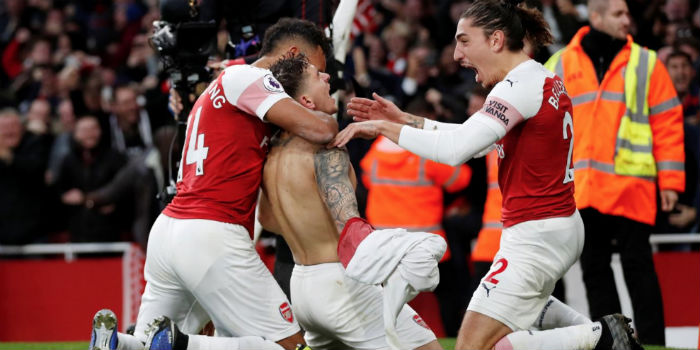 Lucas Torreira has been threatening to score his first Arsenal goal for a few weeks now.

You may remember the swirling effort that was just tipped over by Alisson in the 1-1 draw against Liverpool a couple of weeks back and last Sunday he hit the post at Bournemouth.

Today, against our gobby homeless neighbours, he finally delivered the goods. And in real style.

Collecting a great through ball by Pierre-Emerick Aubameyang on the corner of the box, he escaped Eric Dier’s lunge, took a touch and smashed home a low drive across Hugo Lloris. 4-2 to the Arsenal and game over.

The Emirates went absolutely mental. And so too did the players who mobbed the shirtless Uruguayan down by the corner flag.

After the match, the midfielder paid homage to everyone who has helped him settle in so quickly at the Emirates.

“It’s my first derby for Arsenal and it’s an incredible game,” he told Arsenal.com.

“During the week, the fans really showed me how important this game is and it was for us as well.

“It was great that we were able to win to continue our progress in the Premier League, which is one of our objectives.

“Tottenham are a very good side and they made it hard for us to find space at times, but we showed our spirit and our soul during the game. We’re really pleased and so I am, both with the goal and the win.

“I think it was the goal that put the end to the game, if you like. It was a reward for all the hard work that I’ve been putting in since the very first moment that I joined Arsenal.

“I’ve been working hard to adapt to what is a very intense league. It’s not been a long time, of course, but I think I have adapted. I just want to say thank you to my team-mates, the staff and everyone at the club.”

And we’d like to thank you Lucas. That was a goal and a moment that will live long in the memory.

He is the same height as me, so hugely satisfying to see him fix our huge midfield hole 🙂

Now for the ManU cunts. Let’s show them where they belong – mid-table.

In that case, you sir, are a giant in spirit!

I had the same growth hormone issue and treatment Lionel Messi had when I was a kid. Torreira would have absolutely loved him when I was a kid, seeing someone his size take
on and beat people like Eric Dier and Dele Alli. To be honest, I think I still do ?

*I would have absolutely loved Torreira I mean haha

oi, team blogs, what has happened to YOUR policy on swearing, the language on here is appalling, can you please put a stop to it, thank you

Get 2 d Choppa
Reply to  arseblog

Blogs I wish I could upvote you a thousand times

There was a young man named Torreira, in some ways the same as Vieira, he’s what we’ve been missing, let’s see some badge kissing, this is the exciting new era!

I normally detest limericks, but bravo.

Oh now i get it, we’ve been looking at it the wrong way all this time.. the key to replacing Viera was to find a midfielder whose name sounds like his’ and not look like him.. makes perfect sense

Genuinely in love with this guy, completely smitten ?

This lad was a bargain. Scout team have did wonders getting him in. At 22, the sky is the limit for him. I hope he signed a long contract!

3 years I believe but hopefully they are working on a new contract right at this moment!

Class player already but has done so well in a new league.

Despite his size he has filled a huge gap in our side.

Torreira makes me want to buy a jersey. First player whose name I’d like to have on my back in basically forever.

Haha I thought exactly the same.. I play the ‘Torreira’ role too 🙂

f*ck the jersey. I’m getting a tattoo!

He’s been a quality signing. I just wonder how long it will be until City and Barcelona come sniffing

Exactly my thoughts and fear. But let’s cross that bridge whenever we get to it.

He would never join Cardiff or Leicester.

I’d like to think he would tell them to fuck off, I’m a gooner!

I would like to think by that time Emery would have reshaped the team to his idea and worked his magic that we would be genuine contenders for titles.

Emery has already genuine top-4 contenders & its not even Christmas.

Anyone else read this article with a big smile on their face?! Lol

Great performance by our lads… Beyond proud of them! Hard work pays off, keep it up!
Torreira… Our Little Uruguayan but with a massive heart!

This guy is only 22 and he is already my hero despite the huge age difference between us….

Laughed like hell when he took his shirt off. Only thing that would have added to the bliss would have been a sword in his hand!

Loll You have an irrational sense of humour too

Dier shoving Torreira during the build-up to his goal, and Torreira using that shove to curve his run away from Dier’s lunging tackle was just one of so many great little details from today.

The guy is only 22, he’s gonna be a beast, hopefully we can fullfil his ambition and get his best years. I’d go as far as saying he could turn out to be our best signing since Santi or even as far back as Cesc.

I’d add Auba to your list too, and Ozil for the culture shift from the bargain basement to record breaking..

Auba, yes! Ozil…I’m starting to think we could have put that £350k to better use. Hasn’t been a standout this season and the last 2 games have proven we can win (and win BIG when it matters) without him.

Ever since TR7 retired, haven’t decided whose jersey am going to get. I think I might opt for Toreira.

This guy is so awesome. He’s a great little Uruguayan bastard on the pitch, and yet always seems like a complete gentleman any time you hear him open his mouth. Plus he’s only five feet tall, and it’s been scientifically proven that every inch under 5 foot 10 makes a player 10% more endearing.

all else aside, i’m worried about throwing around ‘homeless’. folks have to sleep rough and that’s no good. the spuds are more like a turd lacking their toilet bowl of a plumbing clusterfuck.

Ah, socially consious but equally insulting to the Sp*ds. Gotta respect it!

What a way to cap off your first NLD, so happy for him!

What a fr***kn player.. my absolute favourite n this team..

Getting a shirt with his name on…

Just a pest nipping at the heels of opponents.

And what a way to cap your first NLD.

He’s also got Granit playing superbly and we really have a superb midfield in the making now. Captain for the day, Xhaka was tremendous today.

But the wee man brings the fight we have been missing since Santi got knocked.

What ever comes before “eira” in their names is because of their heights. We love you Lucas.

The Pitbull or is it the Terrier. Great player

yes, after we sell ozil and tie up ramsey