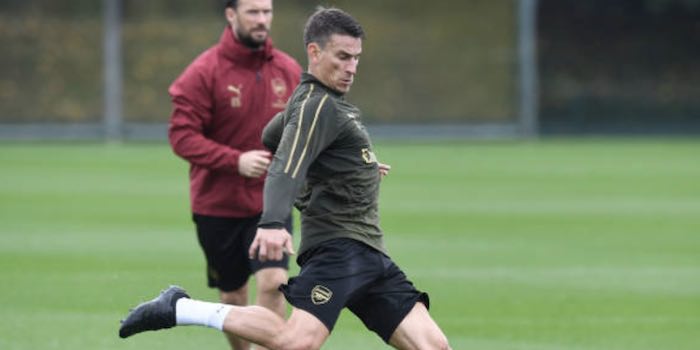 Arsenal’s medical team have confirmed that six players have returned to full first team training ahead of Saturday’s match with West Ham at the London Stadium.

Mesut Ozil, who has missed the last few games with a knee injury, has also recovered and could feature against the Hammers.

It means only Henrikh Mkhitaryan, Rob Holding and Danny Welbeck are still in the treatment room. The latter two will likely be sidelined for the rest of the season but the Armenian’s broken metatarsal is on the mend and he’s pencilled in for a return next month.

Given it’s Wednesday, it seems unlikely that any new faces, should they arrive in the next couple of days, will be involved.

All in all, positive news.

Good. Just in time for the back-nine drive. But we still need to sign a couple of defenders.

As Ozil is now fit it’ll be interesting to see whether or not he starts against West Ham.

We win as a team, lose as a team and get injured as a team.

Out for a while and judge him if he starts or not. Yeah! Well thought plan there.

Is this article really claiming that Bellerin’s fashion sense is already cured?

… and no mention of whether Mustafi’s common sense transplant took.

Sadly doctors have said that is incurable…:)

I’d say it’s probably a chronic condition like Kos’ Achilles, but we can manage him through it with steady treatment.

Yes, don’t see why we can’t. get the confidence up, and don’t embarrass ourselves vs chavs and citeh.

How do you know they didn’t have a lot to do over Christmas anyway?

We need to get back in the champions league next year to attract better players, provided the board would spend. Welcome news this though…

LANS to the 6th power.

If anything, this may discount us going in for a defender now in market. Mustafi despite what some people may moan about is still one of our better Cback options. Mavropanos is largely untried and with minor games running out in peripheral cups (or gone), he may be better off on loan. Koscielny is also gaining back some of his sharpness so the hope (gamble) is he will sustain through most of the rest of this campaign. Weighing in against this would be if Unai felt someone like Calero (Zarragosa) would be long term with Sokratis also hitting 30 this… Read more »

How do you find time to write comments this big

Word on the street is Henry is tapping up Kozzy for Monaco and we are in for a Juve swap sweetener deal for Rambo. If he goes there we get CB Medhi Benatia who fouls…………a lot, according to Whoscored.
Glad young Mav is fit again, I liked the look of him. Doesn’t get flustered and puts it about. He and Holding are the future.

You didn’t see Hector in the stands disguise as the owner of Blackpool last match?

Like 6 new signings! Great bit of business in the January transfer window!

Damn, I was going Mustafi was still injured. I heard he was suffering with a damaged ability to defend/hamstring thingy.

I am afraid, that’s the January transfer window done.

Perfect timing for the classic Wenger quote of “he’s like a new signing”. What I just hope is the classic second wind miracle that makes us clinch the 4th spot.
Anyone know how I can sell my dodgy lasagna to the Homeless?