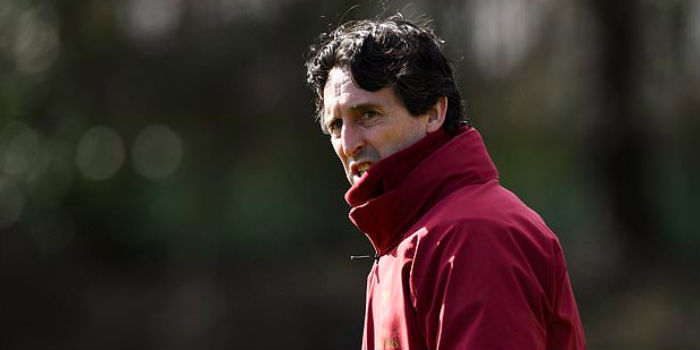 Unai Emery says his players can claw their way into the Europa League quarter-finals by controlling Thursday’s match against Rennes from start to finish.

The Gunners need to score at least twice following last week’s calamitous 3-1 defeat in France, but despite the uphill challenge, the boss is positive that a vibrant home atmosphere, coupled with determined, clever play, will be enough to pull off a comeback.

“We are very demanding on ourselves,” he told his pre-game press conference.

“It is a positive issue. We want to play top matches against the best teams.

“In the Europa League we are finding some results, like the last round versus Borisov, difficult.

“It will be a tough match but our demand for our best performance is very high. I want to play matches with difficult results, against tough players.

“Tomorrow we need to be together and create a big atmosphere with our supporters to help us.

“We need to play with high emotion, but taking clever and clear decisions on the pitch. These are both important issues.

“We need to control for 90 minutes, maybe more, we want to control but be on the game.”

Arsenal’s task in front of goal has been helped by UEFA’s decision to reduce Alex Lacazette’s suspension, dished out for his red card against BATE, from three to two games.

The France striker will now be available to partner Pierre-Emerick Aubameyang, should Emery wish to go all out in attack from the off.

Something has gone our way for a change!! Glad Laca is back… a similar line up to Sunday will do nicely. Sokratis suspended is a big loss, but hopefully we’ll do it & wipe that smile off Ben Arfa’s face COYG

I’d be inclined to start the same front 3 as against United. Maybe Torreira for Ramsey and, gulp, Mustafi for Sokratis. 3-4-1-2 or whatever one would call it.

I don’t think we should view Europa League as a chance to get into the top 4. It’s just an opportunity for us to get a trophy. It will be wonderful if Emery can win a European trophy something that Wenger could not do in his 22 years at the club but if crash out at some stage i won’t be disappointed because for me it’s important we finish as close a possible to the PL champions. We need to win against Newcastle and then push on from there in the league. The league is not going to be easy… Read more »

I understand your viewpoint but personally, finishing 3rd or 4th doesn’t really matter much in the grand scheme of things, whereas a trophy is a trophy, even if it’s not the flashy European trophy.

I get that, but I see the financial boon of us finishing in the top 4 as more important to us right now than even a European trophy.

But to be fair it’s looking increasingly likely the winner of the CL will be an English team, so it’s top 3 > EL > 4 for me.

Agree with @goonero. Let’s hope they don’t burst our bubble by finishing top 3 and making Emery look like Wenger 2.0 allover again. “What scares me is Sven came out couple of months back and said Arsenal are like Dortmund of PL. They can’t compete with big clubs like United etc who are like Bayern” I wonder what it means with regards to spending. Hey i won’t say no to a Guendouzi but not every buy has to be a Guendouzi. Not now. Not when we have Laca, Auba, Ozil and Mkhi in their prime here for the next couple… Read more »

A win tomorrow would put us ahead of Spurs? I actually like that.

I don’t agree. Cech was arguably our best player in the first leg and is still a great keeper and is still better at dealing with crosses. Leno is improving all the time I agree but we still need to give Cech some game time

Why do we need to give Cech game time? He’s retiring

Torreira for Ramsey and Iwobi for Ozil.

Torreira for Ramsey, yes, Iwobi for Ozil, no. IMHO. Ozil was pretty decent the at the weekend and presuming their defence will sit deep we’ll benefit from his vision.

This game is going to come down to away goals I suspect, need a solid performance at the back so the rest of the team can do what they do

I would suggest taking a cue from Juve yesterday’s performance. Yes, they attacked relentlessly, but the key was the hunger with which their players went at every 50/50 ball and second ball… they must have won 95% of them. It was impressive to watch. If we can somehow replicate that attitude against Rennes I see no reason why we can’t go through.

Agreed. And if we really blitz them with energy and hunger, they will have a hard time getting a foothold in the game at our home. Their crowd gave them so much belief in the first leg, so if we can start positively and really go for the jugular I think we can make them put the handbrake on and collapse. Going to need an attacking, confident line up and full commitment in every engagement. We can do it ?

Yes, but. Juve has this incredibly annoying player who is also, by quite a long way, still one of the two best football players on the planet. Hunger and attitude help–maybe are absolutely necessary– but Ronaldo won the match.

Jive NYU’s (Juventus with Apples shit spell check) done did the business against Athetico, so why can’t we? Coyg!!

A Different George
Reply to  ToucanSam

It’s a break after this. Up top either Auba and Laca with Ozil supporting or Laca with Iwobi and Ozil supporting on either flank. Iwobi and Kolasinac is a strong partnership. Ozil has done well on the right supported by Ramsey and AMN. As mentioned many times there is no absolute set up. 3 at the back gives us caution but releases the menace of Kolasinac and gives AMN cover. At the back, Mustafi (if fit) may need to come in for either of Koscielny or Monreal. Midfield Torreira and Granit. I think Unai will back Cech though as the… Read more »

“ok guys bring it in, get in the huddle. Now remember, at all times to…