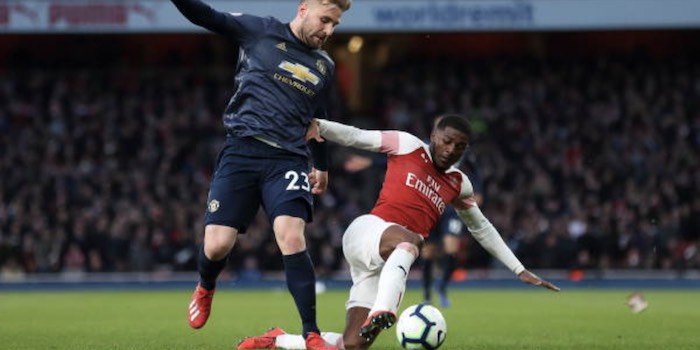 Ainsley Maitland-Niles had one of his best performances in an Arsenal shirt yesterday as the Gunners ran out 2-0 winners over Man Utd.

The three points against a top four rival were absolutely crucial, the academy graduate played his part in that with an outstanding second half display after some struggles in the first 45 minutes.

The 21 year was full of praise for his teammates, but also for the fans who responded to the side’s efforts and helped create a great atmosphere inside the Emirates.

“The fans were brilliant today and we need them behind us every step of the way, just like that today,” said Maitland-Niles.

“Not just big games, even in the games where we don’t have to win but we should still win. It’s fantastic to hear the noise of the fans.”

As for the game itself, he continued, “It’s a big, big result for us, 2-0 at home. People don’t come here and expect to win easily, but we’ve got to keep our roll going and make it hard for teams to come here so that they know they’re not going to win.

“We’re all team players, you know. We die for the team and you could see it today in every tackle, every chase down and every block.

“The manager spoke to us in the week and especially after our loss in midweek. We had to put things right today.”

We gave Ainsley 8.5 in our player ratings? Check them out, and leave your own rating here.

Maitland-Niles: Arteta demanded more from me

His first half defending was terrible, allowed Shaw a lot of room to create, and the game could’ve ended there. He improved in the second half and made some saves. His overall attacking contribution was poor all around. I’d still prefer Mustafi or Licht in defensive games where.

He did indeed have a lot of trouble with Shaw who (along with Smalling) I thought was their best player in the first half. Much better, more confident, performance after the interval.

Everybody has trouble with that side of the pitch when they play United. Just like opposition generally has more trouble with our left side of attack. Pogba Shaw and Rashford are no easy day at the park.

Mustafi? You need to be put on a register. 1) Mustafi is a centre back (apparently) not a wing back 2) Mustafi plays like a badly made ikea wardrobe.

Would really like to see him kick on and progress into the centre of midfield.

Big display from the Mait yesterday

He did great yesterday and really helped
the team. In fact he’s helped left, right and centre this season

As were you, Ainsley

Ainsley still looked uncomfortable as a defender to me, although he generally did well. I would like to see him rotating with Torreira when a break is needed, as constantly being out of position will ruin him in the end.

Yes – reckon his abilities aren’t in the back line. Could be a better option than Xhaka?…………

So happy he’s improving and shutting up all those bellends that gave him abuse earlier in the season.

Despite the roller coaster season, we are so close to third! Can’t imagine what will happen if Emery gets his players & system for next season!!! Good EBENING everyone!

He did really well yesterday. I know everyone wants him to play in the middle of the park but I don’t think the manager is one of them. Also, the numbers are not in his favor right now. He has Torreira, Guendouzi, Xhaka, and if we get Rabiott, he is not going to get any look in at central midfield.

Bellerin was once a winger, see how he turned out. You never know in this game. Heard someplace that Ederson of Man City started out as a striker or something. It’s in his best interest to play where he is asked to.

Love how probably his two best games for the club have both been against United, and both when he’s been marking Pogba

He’s got big potential, I really don’t understand the criticism he’s received in some quarters, he’s a young lad playing in a number of different positions, whilst still learning the game. We’ve got to start getting 100% behind our young players, through both good and bad times, Iwobi+Nile’s might make it? they might not? At 21/22 no one knows if they’ll kick on or not. But I see absolutely no benefit in abusing and destroying the confidence of our young players after poor performances, young players will always struggle a little with consistency. Iwobi has improved a lot, he gets… Read more »

I think he needs to focus on RB/RWB now. He has great pace which is best used out wide. I don’t see a CM in there despite saying he wants to play there. Too casual about losing possession for me and he hasn’t really played there. Spent most of his youth career as AMR including the largely successful stint at Ipswich. I think hector 2.0 is his best chance at playing top level

He put in a great shift. Well done, Niles.

Fans were really up for it. Brilliant on the day even if one idiot got carried away with himself. AMN was a bit anonymous first half but some great recovery tackles in the second. He has excellent physique and stamina. I’ve said it for some time he is a natural alternate to Bellerin. But he needs to learn positioning still. That will come. The other star on the day was Leno. Great stops as we still had plenty of iffy moments at the back. But the stand out was Unai’s tactics and our midfield. We were solid in the middle… Read more »