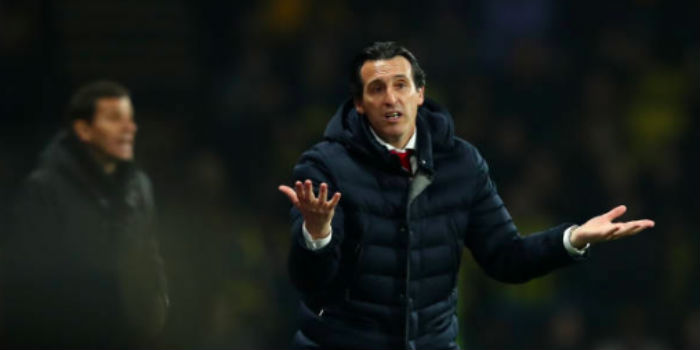 Unai Emery says Arsenal struggled to impose their game in the 1-0 win over Watford even though his side played most of the game against 10 men after Troy Deeney was sent off after just 11 minutes.

Pierre-Emerick Aubameyang had already forced an error from Ben Foster to give the Gunners the lead before the red card, however, despite a numerical advantage they couldn’t kill the game as the FA Cup finalists repeatedly pushed them back.

“We were competitive today but in the circumstances, we can control the match better,” Emery told the BBC.

“We didn’t make it easy to score the second goal. We did not control the ball in the attacking third.

“When it is 1-0 they have chances, their moments. Mostly they attack with set-pieces. This three points is very important in the table.”

While the performance was more artisan than artist, at least the Spaniard saw his players grind out a first clean sheet of the season. He was quick to draw attention to it.

“A clean sheet is very important,” he said. “It is going to give us a lot of information, this match.

“Our analysis will give us confidence. For some players like Konstantinos Mavropanos it is good, to play some minutes and give other players some rest for Thursday.

“It is a different competition, we have a two-goal advantage against Napoli but it is going to be very difficult.”

We’re in the last leg of the tournament. We play Thursday-Monday-Thursday, and are doing better than Chelsea in that regard. We dug our heels in and ground out a result. Three points. Glad the boss realizes the need for control, but you cannot argue with a result. Onwards.

last leg of the season*

I love these kinds of wins. We were very poor tonight and probably deserved to lose but we kept a clean sheet and came away with 3 points!

I agree the result and clean sheet were very welcome.

However I can’t get myself to love such games. It was squeaky bum time. I had to mute the TV and look away for most of the last 10 mins. We had plenty of opportunities to get another goal to make it easier on all of us.

Ha… I was thinking the same thing yesterday, “Watching Arsenal is definitely not a fun hobby, it’s an excruciating and intense experience, that costs an exorbitant amount of money, and gives me far more stress than work, the Mrs and the kids combined”

The days leading up to Spurs or United games are by far the worst, I think I need to see a shrink…. and get to the bottom of this lol

Absolutely right. Could not control the match against ten men and minus Deeney. Poor on ball decision making, lack of composure. Unai tried to go 3 at the back and add a midfielder further up in Ozil in lieu of Torreira who was struggling. As it was Garcia counter punched and added another striker in a 4-3-1-1. Unai then went flat 4 and added Guendouzi to provide a bit more energy to the lethargy in the squad. But to no avail. We were still listless and lacking sharpness up front. We need to improve by a large margin if we… Read more »

Agree. The result was a good one – no argument of course – but there’s a fundamental problem with Arsenal away from The Emirates. Nobody should pretend that this result addresses that, it doesn’t. Can we retain a top four place at the end of the season? Yes, but on the honest evidence of the performances against Everton and Watford it’s going to be “squeaky bum time” for quite a while yet.

Nothing could have prepared me for the manner we achieved the result…?. Emery must be secretely making some human scarfice in the alter of some Pagan God in the basement of his house to achieve results like that! If it was Arsene, it would have been Leno who would make that mistake and Torreira would have been sent off for diving for having the audacity to have Deeney’s elbow on his face and Aubameyang would probably have limped off with injury… but it’s been long overdue! This is Karma working double time! I was not sure about the line up… Read more »

Gooooooonnnnaaaaaaaa
Reply to  VAR will solve the problem

I think it shows he doesn’t plan to start with Mikhi or Mustafi on Thursday. AMN, Socratis and Kolasinac will come back into the team and he’ll probably play Auba and Laca up top with Ozil just behind them. Mikhi and Iwobi to come on second half to see off the game and help out defensively.

PeteyB
Reply to  VAR will solve the problem

I guess the full 90 from Mikhi means he’ll not be involved much or at all on Thursday.

We were awful, Coach. Very awful.

Yeah, to be honest. But we did grind out the result in the end and that’s all that matters.

Arsenal’s away form will never improve I think, whether it is win or lose. Performance was not convincing even a goal ahead and a man down in opposition team.

Have anybody seen Mkhi’s finishing in his all shots he has taken and Masina’s shot from long distance that hit woodwork. Even aubameyang had poor finishing yesterday. Created so many chances especially by iwobi, he has played exceptionally well against a very physical team.

Big win! Fucking horrible watch
For real we will have a hard time in Naples if we play like that.
Mkhi just edges Mustafi for biggest liability to complete the 90 tonite. Neither played their way into my starting XI for Thursday.
AMN did well when he came on

Chill guys. Emery is only lulling Ancelotti et al into a false sense of security… Nothing happening here Carlo!

Three points: Good; Performance: Terrible. We needed maximum points and, thank goodness, we got them BUT what a dismal performance! Watford were more dangerous for most of the game and with only ten men for 80 minutes or so! All the talk of better things to come that we’ve heard from some Arsenal players recently was, if we’re honest, just talk. The truth is that we got away with it against Watford, but Arsenal have still failed to up their away game – even in this most important stage of the season – and it’s unlikely to work twice. There’s… Read more »

I take into consideration the effort that we showed yesterday . I think much has to be done in our defence and striking most of our defence are holding the ball so much at the back and this buys a lot of time which can be so bad if we haven’t scored
To our strikers they are not not straight forward since they don’t hit on target they end up loosing the ball to their opponents easily i like the kind of which Iwobi attacks and the likes of Auba,Meitlands and Quendozi-for midfielder

It’s our midfield guys. We never controlled the midfield and could not pass quick enough playing out from the back to isolate their high pressing forwards. But the biggest problem was finishing. If Mhika and Auba would have managed to score any one of their many many chances it would have been game over. At 1-0 you are never safe. The defense did very well and Leno made two very good saves along with AMN last ditch block. But the forwards were not getting the job done up front and that needs to be resolved. I believe Lacca plays up… Read more »

We stank Vicarage Road up, just like we did at BATE, at Rennes and at Everton in recent memory. I hope that we’ll somehow scrape past Napoli (possibly on an away goal) but there must be dramatic improvement if we are to get any points at Wolves and Leicester. Sorry but I just don’t see it. Never in a million years did I think that the day will come that The Arsenal would look scared against a 10 man Watford.