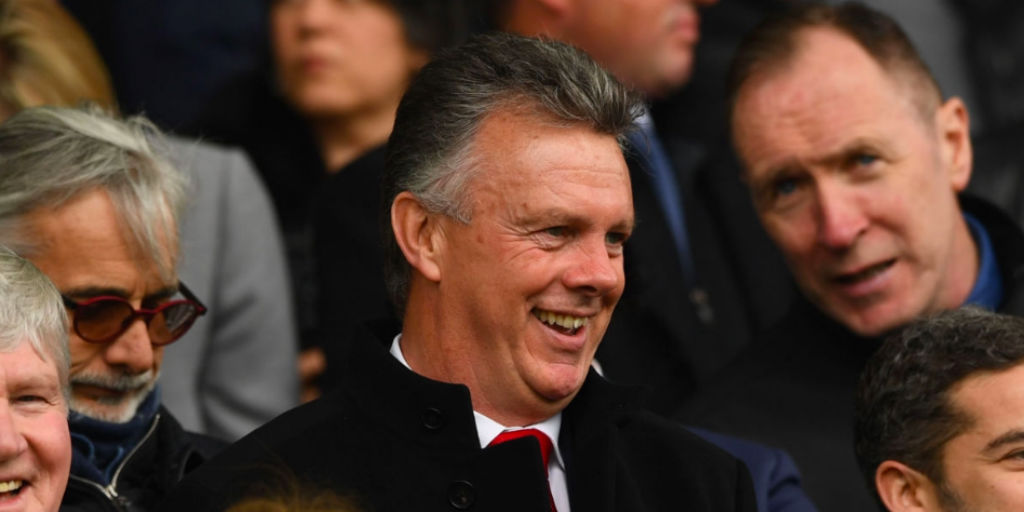 According to various reports, Raul Sanllehi and Sir Chips Keswick have fallen out over a proposal to appoint ex-Gunner David O’Leary to the Arsenal board.

It is said that the Spaniard does not feel the need to add the club’s record-appearance holder to a newly created advisory role, something that Chairman Sir Chips favours.

A bad-tempered game between Arsenal and Leeds in 2000 saw O’Leary and Robert Pires involved in a headline-making, post-game bust-up that seemed to drive a wedge between the Irishman and Arsenal for quite some time.

Time heals all wounds and both Pires and O’Leary are now ambassadors for Arsenal with the pair working together as part of the Legends squad.

O’Leary has close links with the club’s ‘old guard’, which includes Keswick, Ken Friar and Lord Harris of Peckham, and has been spotted wearing the club tie in the directors’ box at games home and away this season.

Were O’Leary, 61, appointed it could be classed as an injection of young blood given the current average age (excluding Josh Kroenke) of the board is over 78.

Interestingly, ex-Gunner Alan Smith – who played alongside O’Leary for six years – used his column in the Evening Standard last week to talk up his former teammate being appointed to the board.

Smudger wrote: “This increased involvement does make me wonder if O’Leary is about to take a more active role — a seat on the board, perhaps, to offer football advice. That would feel like good PR at a time when frustrations are growing within the fanbase.”

While Smudger might view O’Leary as a canny appointment, what doesn’t look great, especially at a time when the manager’s head is on the block, is for leaks about further internal disagreements making their way into the press.

Given Sanllehi’s job title is ‘Head of Football’ you can understand why he might be suspicious of O’Leary creeping onto his patch.

With an average age of 78 they are going to need to blood in some new bodies soon and who better than someone that knows how to play football and knows the meaning of “Arsenal Football Club”!

I’m bored of the board

I’m the Chairman of the Bored.

I’m sick of all the stiffs,

Is Emery gone yet?

Says something when 61 years old isn’t considered “Young blood”. Not against him per se, and certainly not on the “Don Raul” camp just because of the summer buys (I’m still suspicious of him due to the continuously emery backing but also the ousting of old diamond eyes and also the club’s response and reaction to Koscielny), but I’d prefer much younger blood in that board; DB10 if interested, Etc. A buddy of Sir Chips who already lives in his ivory tower isn’t the right path for me. Also, board disunity is par for all boards. There’s concern of such… Read more »

Record games, knows the club, imo did a good job with Leeds ( til the money issues, not likely we over spend beyond our means in transfer market) . Did he not get Leeds to champions league knockout rounds or even a semi final ??
Arsenal man , knows football and importantly Arsenal values before and after wenger appointment. Will hopefully hold the current board to account . Not just Barca mafia and Stan “we do it for profit/balance sheet”

You obviously don’t remember any of his 722 games in the shirt.

I nominate Arseblog.
Lol i can see Andrew with a similar post like Aubameyang’s the other day when he gets the role.

Double dislike for having xhaka in there along with being fully off topic.

Double dislike for having Ozil in there and having a go at Xhaka.

Do you have two accounts or a telephone psychic twin 🙂

I like comment when they are simply up or down vote-able.. pls either make sense or don’t at all..

Could work , remember Emery had not had chance to play this back four before.
Start with this team then as soon a torreira ir Xhaka gets a yellow bring Matteo on . ( bring on Pepe in second half too)

Getting more football knowledge onto the Board can only be a good thing.

Not sure about Spanish club Boards, but doesn’t seem to have been bad for Bayern etc

Raul continues to consolidate his power. Can’t the owners see how bad leader of their company he is?

I was starting to wonder if this is the subplot of this story. Pushes Mislintat out, doesn’t want Leary in. Maybe we’re reading too much into it but then… maybe not.

Based on what exactly? Wasn’t he being hailed as the second coming only a few months ago?

For the good signings yes. For what appears to be dithering or worse on Emery no.

Not by me, and the problem are not only his transfers. I am convinced that his style is poisonous since his handling of Ramsey. And the evidences just continue to pile…

Let him mess up the Emery situation first before we mess him up.. this is his first big test, let’s see how it goes

Thank you for your interest in our affairs…

I remember that bust up with Bobby Pires. I also remember him remarking angrily, ‘I couldn’t care less about Arsenal’ while managing a Leeds team on a Champions’ League run full of thugs and racists. I should be able to rise above it as he has given a huge amount to the club, but for some reason I can’t, and I am not particularly bothered if he joins the board or not.

I’m all for ex players being involved, if Raul doesn’t like it, tough

Not sure on what basis O’Leary merits a place on the board. He was a great servant to the club, but has not achieved a huge amount in football since his playing days. Brief stints at Leeds and Aston Villa both ended in the sack, and the eventual relegation of both clubs, albeit largely due to financial mismanagement by the owners. He has not held a position of note since being sacked in 2011 by a club in the UAE, so his track record is fairly underwhelming. But who knows. It is hard to second guess this Arsenal board.

Seems a little bit salty from Raul to me

I think it would be an incredibly stupid decision to have someone on the board who has actually played and managed in the game at the very highest level and is a club legend. David’s massive experience and deep knowledge of the club and football would be absolutely no use to Arsenal FC.

Far better to keep listening to the likes of Sir Chips and Lord Harris of Peckham: look how well they’ve managed the club up to now.

If you think our squad is unbalanced then our board is something else. No wonder we have fallen behind so much when our football decisions are all being made by 80 year old bankers and businessmen. A diversity of opinion and backgrounds is key for any board of directors to be effective. The lack of expert football opinions on this board is concerning to say the least. I understand Arsenal is a company and its duty is to make money and all that, but FFS the product you are selling is football.

Civl war is happening…
Please remember how we lost Sven Mislintat!
We can’t afford losing Sanllehi. For the first time, i feel that we really have a specialist in negotiating deals.
He has done all the things right except for not sacking Emery until now.

So shut it Chips Keswick and let the Spaniard continue his project.

Edu, Francis Caggigao and Mertesacker are working for a long term target.

The way he negotiated the Ramsey deal was certainly quite special.

Good stadium wrong board it be coming WWE

Am I the only one who finds O’Leary’s sudden involvement with the club post-Wenger a bit strange? He made a big hoo-ha about not caring about Arsenal when he was at Leeds and hasn’t really done anything in the world of football since the mid 2000s, yet all of a sudden finds himself lined up to be on the board of one of the biggest football clubs in the world. Yes, he did loads for the club as a player, but so did Tony Adams – would you put him on the board? Or Ray Parlour? The Arsenal most fans… Read more »

Herbert Chapman, Bertie Mee and George Graham did absolutely nothing for the club!

I don’t think he said that. He said the era that most fans hark back to, feel nostalgic about, would like to recreate, is the first half of Wenger’s tenure. Isn’t that true?

Or is he really coming in to take over as interim manager?

My 98 year old Gran should be out of hospital next week and would be an upgrade on the current first team coaching staff.
Not sure about O’Leary as interim manager though, I’d prefer the more youthful approach of someone like Freddie and review the situation in the summer.

Does anyone even know who the buck stops with? I have no idea who runs Arsenal? We have a shared/split CEO role An absent owner The owners son, who’s also absent….. A pointless boardroom packed with geriatrics, who are only there as a reward for selling shares, or supporting the sale of shares to our absent owner. It’s messy at best…. if Raul and Vinai wanted to sack Emery? How would they even go about doing it? If they asked the board? Stan+ Josh aren’t ever there, so the other board members wouldn’t have the authority to sign it off.… Read more »

Frankly in a way he is right, there is already far too many Indian chiefs. Venkatashem I believe rightly oversees business end and day to day ops so no problem there. …not entirely sure what Edu does or brings (beyond Martinelli). Looks to me he is a liason between Academy and first team more than someone who is entirely intimate with markets. Either way he is someone Sanlehi can have firm control over rather than the misfiring Mslintat. The brave thing to have done last summer, would have been to boot Sanlehi upstairs (where he is prob more comfortable). He… Read more »

Two league cups and two FA Cups? 1993 was the only one for both I thought unless my memory has dissolved further.