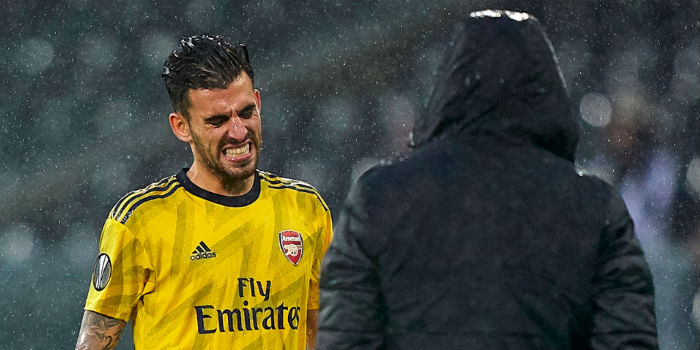 Dani Ceballos has been ruled out of Saturday’s trip to Leicester after picking up a hamstring strain in the 1-1 draw with Vitoria in midweek.

The Spanish midfielder pulled up during the second half, and while it’s not thought to be a serious problem, he won’t be available for Unai Emery for what is verging on a must-win game for the Gunners.

At the very least, it’s a must-not-lose, because doing so would leave us 9 points behind the Foxes.

Arsenal have taken just 2 points from the last 9 available, and over this season and last have won just 6 of the last 18 Premier League games.

It means the pressure on Emery to produce a good result tomorrow is intense, but we face a high-flying, confident Leicester side who are making real progress under Brendan Rodgers – who only took over there in February of this year.

Beyond Ceballos, everyone else is available in fitness terms, while those who played in midweek – including Kieran Tierney and Nicolas Pepe – may find themselves benched if Emery decides to rotate.

I’d rather lose to have this guy sacked from our beloved club. Hurts to see Arsenal lose any game regardless. It’s all catch 22 ain’t it

I love this club and I want us to win….but realistically, I think that thought is not realistic

Rben if it’s realistic..i don’t want it to happen because it won’t benefit in the long run…now i have found myself wanting arsenal not to win games…..sometimes we need to sacrifice the present in other to save the future

I get where you’re coming from but I never want Arsenal to lose. It’s the drug that is Arsenal, I get pissed after the game and say I’m done, once the weekend comes up I find myself at the emirate buzzing with excitement! Emery needs to go ASAP though, ffs. We don’t owe him anything like we did with Arsene, so I hope it doesn’t have to get really bad for this board to make a managerial change. Now is the time when we see what they’re about, it’s all nice and easy to come out and talk a good… Read more »

Apathy is the word right now…and I’m sure you know what that means…i feel nothing for the team right now.. So i don’t give a damn about the results anymore…until the club shows alot of ambition

They can lose alot for all i care.. I don’t give a damn…every Friday they get their alerts but what happens to the supporters that depend on the players to lighten up their day or week… The board,coaches and playets are showing alot of disrespect to the fans

My heart goes out to anyone relying on AFC to provide self respect. I could make a very critical connection to how that manifests itself in attitudes and reactions towards others like Xhaka and Emery who likely have high levels of self respect. Nah….we can all make our own observations as to connecting those dots.

No, but how could someone be the wrong choice if the team does well under their management?

It all just smacks of “I’m taking my ball and going home”.

I think we will win tomorrow. Leicester are a cocky club at the moment (smashing 9 against Southampton) and we look ripe for it, but I think we’re going to win this on the strength of the individuals we’ve got. I hope the win doesn’t mask what is glaringly obvious and we address the issue over the international break, but that is where my wishful thinking will rest.

Hope this is the last game for Emery. He is rwally out of his depth, just read the blog and the thing about Torreira if true, tells how much of a clown Unai is. Sucks to know we have such a great squad but the manager is spineless.

Some words can only be be used to explain on Emery currently words like “really” out of his depth. Totally deserving

I didn’t have any reservations about Emery when he was appointed. Just the hope of a manager similar to our club, looking for the right opportunity to challenge for titles! However, after the draw against ManU this season I’ve given up all hope. For me to sum up Emery, he wants Ozil to play defence (which I understand to an extent) and Torreira to play offense and he is not even a proponent of total football (he probably a proponent of total anti-football?)! His job is on the line and still makes decisions that exposes the players than playing to… Read more »

That picture reminds me of the evil kermit meme.

The_Golden_Wrigglesworth
Reply to  Ya gooner

You have seen into the darkest recesses of Emery’s mind. Good ebening: https://imgflip.com/i/3fo8yi

If Vardy is playing, i expect two goals from him. We leave a gaping hole in the middle, and our CBs arent dynamic enough to cope with a Vardy run where he’s able to accelerate between them from 10-15 yards of open space. We could really do with Torreira in his actual position and Guendouzi close to him. I would prefer Joe Willock at the top of the 3, so for me not the end of the world if Ceballos is out. I’m expecting to lose, but hope we don’t as for me that will be only an inch short… Read more »

A Different George
Reply to  Shance

I remember in Leicester’s championship season, Vardy did score two against us there. Of course, Alexis scored three and we beat them 5-2, a score that flattered them. I honestly believe we have the talent to do that again, and to do that against any team in the league that tries to play football against us, bar Liverpool and Man City. But I’m pretty sure we won’t.

As much as I want us to spring a surprise tomorrow, I have prepared my mind for what I think is a more logical outcome: a loss.
Brendan Rogers, in a shorter time, has vindicated those calling for Emery’s sack.
His imprints at Leicester are there for all to see, while our Emery’s amoebic tactical approach has left the team confused, toothless and without an identity.
Something has to give.
I don’t think a win for us tomorrow should change anything; Arsenal need a new coach at this moment, period.

Really want someone to say to Emery in the press conference ‘reports saying that Torreira is unhappy because he’s not playing in his position and doesn’t know what his role is’. I’d love to see his response.

The Spoon
Reply to  Jack

Be another Ozil situation probably.

You see, Torriera, he 5ft 5 high, he here from Uruguay, he have short hair, not high in air, he match attack, like picture on card, like in a pack, our midfield. Tika taka like with Xhaka. He scared, like Halloween when here ‘Boo’. We play to give chances, to play over land and sea, and Leicester Square, tomorrow. We win. My job, to win.

Terrible rendition, I understood your meaning way too easily

Ceballos missing, meh. I’d be disappointed if we are shelling out what Madrid want for him at the end of the season. The bigger problem for me is that the halfwit in charge decided to play Tierney and Pepe in that pointless game midweek, now both are likely to start from the bench on Saturday. Honestly the bloke is about as clueless a coach as I’ve seen.

Leicester are going batter us.

A Different George
Reply to  Bergkamp2Wright

I was so happy to see Bellerin on the bench in Portugal and not playing, but very annoyed about Tierney–especially since (even if we cared about that match), with three at the back, Kolasinac is quite good. I really, really, want to see both of our fullbacks start a league match together. And our front three. And Ozil behind them. And Torreira in front of the centre halfs. You know, so we can win.

I very much want us to win tomorrow to get the gap down to 3 points. Losing must mean its over for Emery. His target is champions league and 9 points off the pace in November is too much. He could argue he still has the Europa League but I’m hoping the board look at the horror show tahr was last seasons final, and decide we need to try something else and quickly.
On Ceballos I couldn’t see him starting anyway. Bit of a loss for the bench though tomorrow.

If we win or draw against Leicester our board won’t sack Emery.
Then he’ll Fuck up again in the next 2 3 games and by that time it will be too late and they’ll convince themselves that maybe he’ll bring us the Europa League and cite his results in it when asked by the fans.
If they do not sack him after Leicester they will be directly responsible for us losing the two best strikers we’ve had since Henry and Bergkamp.

Even Giroud was arguably as good as Lacazette.

I meant a striking duo.

If we lose at Leicester and he isn’t sacked, there should be full scale protests at the next home game to force action from the board. They are as much to blame for this mess in my opinion, big clubs cut managers loose before the season is destroyed, the don’t wait until it’s too late and they don’t show false loyalty to coaches who haven’t earned it. The disastrous end to last season would have been enough for some clubs to get rid!

Honestly if they don’t sack Emery after tomorrow I think they’ll have a mutiny on their hands regardless.

Ceballos injured isn’t why I’m worried about this fixture.

Lucky for him, I wish I could be ruled out for this game too…

Unai Vader: “Dani, I am your father…”
Dani Skywalker: “Noooooooooooo….!!!”

As the article points out, Rodgers only joined Leicester in February last year. Look at the progress: 2018-19 Before Rodgers Played 28, 35/84 possible points = 41.7% of possible points After Rodgers (18-19 and 19-20 seasons) Played 21, 40/57 possible points = 70.2% of possible points The % points taken has increased by a factor of 1.68, almost doubled. It’s worth pointing out that this also coincides with the signing of Tielemans on loan from Monaco in January 2018 (permanent this summer), he has been brilliant for them. You remember we signed that bloke from Barcelona that made so little… Read more »

That is assuming, of course, that Rogers would even want to walk into the current mess that is our club hierarchy and politics.,.

Will Emery have the cojones grandes to start with an aggressive front six of Torreira, Guendouzi, Ozil, Pepe, Aubameyang, Lacazette.

How far we’ve come that we simply expect Leicester to win. It wasn’t so long ago that such an outcome would be greeted with horror

That photo … looks like the Grim Reaper coming for him

Everyone shitting their pants over Jamie Vardy pretty much sums up where this club is at right now.

If we win tomorrow it will possible surprise me more than any result ever.

My head says were losing 4-0, Vardy hattrick and Maddison as he is flavour of the month. But in my heart there is hope and that is football!

If we lose hopefully that is the end of Emery.

The most important game of this season. I can’t stretch how important it is for us to lose this game. We must lose as bad as possible to move on from dark age of slimy fraudster clown. #EmeryOut

I think a really crappy, desperate, dispiriting draw would be best. We don’t lose any more ground on Leicester, but the board knows Emery must go.