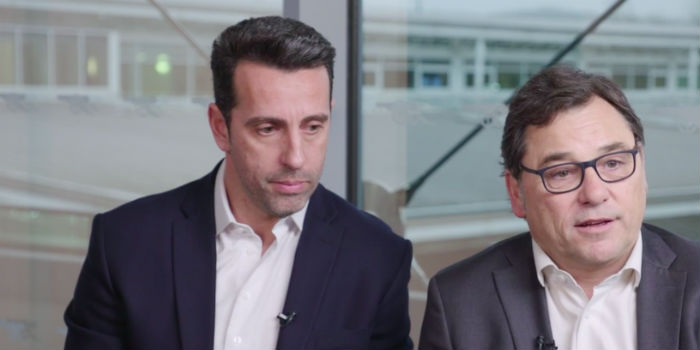 Edu says he was impressed by Mikel Arteta from the moment he picked up the phone to the Spaniard, who today was confirmed as Arsenal’s new head coach.

The Brazilian, a fellow ex-Gunner, led the hunt for Unai Emery’s successor and it sounds as though the duo went on to hit it off in person.

Asked what excites him most about the appointment of Arsenal’s 20th permanent leader, Edu explained: “Almost everything, to be honest.

“We went to talk to the candidates and to understand how they feel, and how they think about the squad and the club as well.

“My first conversation with Mikel by phone was fantastic. To be honest, we didn’t talk about the squad, we talked about what I really believe is the basis, the organisation.

“We talked about human beings, we talked about discipline, that was our first conversation. Then when we met after that, in a very important meeting, he started to show us his knowledge about football, his ideas.

“His passion as well, which was brilliant. His connection with the club as well was important for ourselves. So many, many things made us feel very, very comfortable with that decision.”

Arsenal’s hunt for a new head coach saw them interview all manner of candidates from across the football spectrum. While an impressive CV got many of them a foot in the door, Edu said the connection with Mikel was immediate.

He explained: “What is nice as well is when you see all the candidates, when we started the process, all of them were very good coaches and very good people and they have a very good experience in football but we have been talking about… it’s a feeling.

“Because when you’re in the meeting, they of course all have very good experience, and then let’s see because maybe we are going to say, ‘Oh, we have a connection’ and that started from the beginning with Mikel.”

Head of football, Raul Sanllehi, also played an important role in the recruitment process and was witness to Edu’s first meeting with Arteta.

“I would like to mention, because this is very relevant for us, the connection between the head coach and our technical director is crucial for our model,” said the gruff-voiced executive.

“And that was one of the things that you can only know once you have the meeting in person. I was fortunate enough to witness that moment and I can assure you that the connection is absolutely there, very strong. They view things in the very same way and, of course, there are going to be discrepancies along the way, but that’s healthy. The good thing is that the mutual respect, it’s clear when you see them interacting together.

“How much he understood about the teamwork, what we are about here, the people who are involved in the football decisions, but especially let’s go to the real essence: what is going to happen on the training field and ultimately at the Emirates and every game that we play.

“We were convinced initially, but now it is certainty almost that we have. You never know about the future, but we certainly know we have the person that ticks all the boxes to give him that responsibility for taking us where we want to be.”

You can watch the full interview with Raul and Edu on Arsenal.com.

In 18 months he will be sacked.

May you eat your healthy serving of humble pie in due time.

Why do fans like you exist. Go support Spuds, they got Mourinho.

Too bad I can only upvote your comment once.

Don’t understand your post, I made it quite clear I hope Edu’s comments never need to be cast up to him. Do you have a problem with holding people who are paid huge salaries to account for the decisions they are paid to take?

Maybe in 18 months you t be sensible

We love it! Now pretty please with sugar on top get us a defence capable of some clean sheets.

For this plans to work we need to brake the Bank again.

Please no handbrake on the bank!

Wow….Trump is the U.S president, and Arteta is the Arsenal manager……the world has gone nuts.

Definitely, the proper comparison would probably be Lee Bowyer as new Arsenal manager. Although … maybe he wouldn’t like Vinay.

Naked Cygan is the Arsenal fan other clubs laugh at. Toxic and negative about every single thing imaginable, even before it’s begun.

I actually think you are just a troll from another club the way you act.

Arteta was incredibly convincing in his first interview. Came across as thoughtful, strict and passionate.

Time to stop selling us on the cheap PR. Heard it all when Emery was appointed.

Arteta I only ask that you hit the ground running. I like that you said we needed to start ‘winning’ in your interview. That’s all that matters!!

I also was very impressed with the interview. Arteta has a distinct glint in his eye. I have no doubt he is extremely driven to take Arsenal back to the top. I wish him all the best and he will have my support.

For the first time in what must be 15 months, I am excited to be an Arsenal fan. Let’s unite and get behind him. First thing to do is identify the rotten apples and sell them the idea of change. If they don’t cooperate then they can all go.

Go on Mikel! Hope he’s going follow in the footsteps of Wenger and be our long term manager

Can’t believe anything I hear from these management upstarts. They said the same about Emery

I’m not sure I can agree because they aid the same with Emery. Sweet nothings. That said, hope Arteta kicks off with a win at Bournemouth. If he can, it builds into the match up with the old club Everton next then Chelsea then United. We need to win and rack points up. There’s no excuse. Forget tactics. Teams with poorer resource like Leicester, Wolves, Sheffield are punching higher bc of hard work. We need to win at Bournemouth nothing less. Arteta need focus everyone off ball. If anyone drops in terms of off ball output, they should be hauled… Read more »