THE LOWDOWN
Arsenal Women travel to Crawley on Sunday for an away game against Hope Powell’s Brighton & Hove Albion. The Gunners played there in the Conti Cup in November and with Danielle van de Donk and Vivianne Miedema rested to the bench, were held to a 0-0 draw. Joe Montemurro’s side can expect a similar challenge this weekend against the Seagulls’ well-drilled deep defensive block.

Brighton will look to attack when they can, they caused Arsenal problems in November by launching quick counter-attacks with balls into the channels to exploit the high defensive line. With Miedema and van de Donk likely to start on this occasion, the Gunners ought to be able to ask more probing questions of their hosts on Sunday.

Three valuable points to maintain our place at the top of the @BarclaysFAWSL table ? https://t.co/dDscSpToir

The pitch at Crawley Town is a little bumpy, which will play into Brighton’s hands. With the likes of Miedema, van de Donk, Little, Nobbs, Evans, Roord and Mead in Arsenal’s arsenal, Brighton’s defence will come under concerted pressure and Montemurro will look for his side to move them around with smart runs- not least from the wingers, who will look to draw Brighton’s full-backs out.

With a game against title challengers Chelsea next weekend, Arsenal cannot afford any let-up in Sussex. They currently lead the WSL and will want that to remain the case when the Blues come to town- Chelsea are four points behind with a game in hand, while Nick Cushing’s City are three points back in 2nd place. It’s all to play for.

TEAM NEWS
Arsenal will have Jen Beattie available again after back and calf problems, with Beth Mead available to start after heavy bruising on her leg. Katrine Veje is also close to returning after a problem with her right foot. Montemurro told me last week, “Beth was ready to play today too, but was still a bit tender with the knock that she got at Everton, so we decided to give her another week. Same with Jen and Katrine, so we’re in a good position for the second half of the season.”

Tabea Kemme and Danielle Carter are out with knee injuries, the academy team doesn’t have a game this weekend, so Mel Filis and Ruby Grant will be available. Manu Zinsberger is likely to be restored in goal after Pauline Peyraud-Magnin started her first WSL game since September against Birmingham last weekend.

LAST TIME OUT
The teams drew 0-0 at the People’s Pension Stadium in November in the Conti Cup group stage. The Seagulls took the extra point on offer by winning the resulting penalty shootout. Arsenal have better memories of their fixture away at Brighton in the WSL last season- they won 4-0 at the AMEX and sealed their first league title in four years in the process. In the reverse fixture this season, goals from Kim Little, Vivianne Miedema, Danielle van de Donk and Jordan Nobbs saw the Gunners win 4-0 at Boreham Wood in September.

PLAYER TO WATCH
Kim Little continues to enjoy an outstanding season, with 11 goals and four assists in 17 appearances this campaign. The Scottish international will be key to trying to pick the Brighton lock. Kim is an excellent dribbler in the final third and with Brighton’s defence likely to be heavily guarded, her ability to slalom between players in search of space will be crucial. 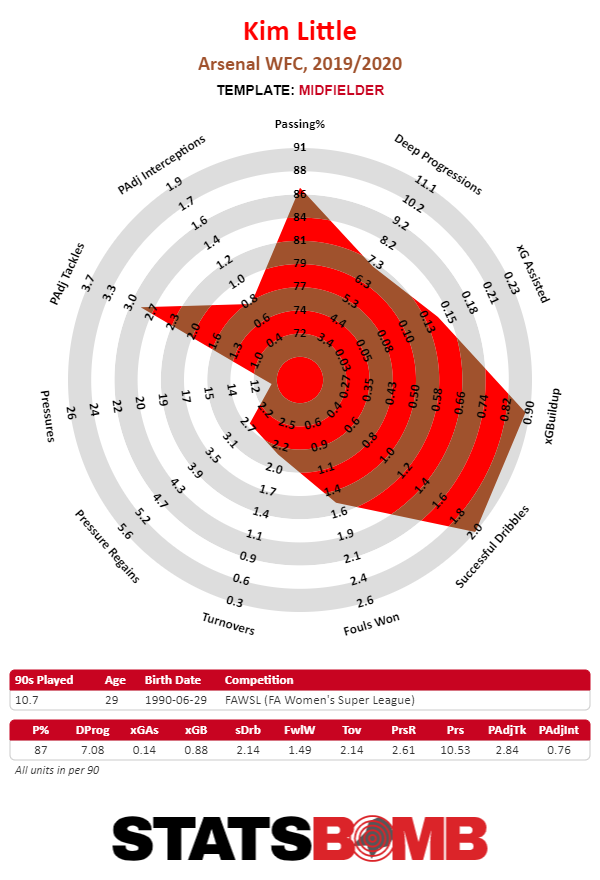 With a pass completion rate of 87% in the WSL this season, Little is very precise considering the areas of the pitch she operates in. Kim takes the ball under pressure in advanced and deep positions to get the team moving. She is the lubricant of the team and on a dry pitch, against Brighton’s banked up defence, her performance will be crucial.

THE OPPOSITION
Brighton are keeping their heads above water again this season and look as though they won’t seriously be involved in the relegation battle, which is shaping up to be a two-way affair between Liverpool and Bristol City. Brighton took a crucial three points against Liverpool last week; despite being dominated for large parts of the game.

Liverpool’s shot-shyness helped them, they squeezed out a 1-0 win despite the XG showing 0.56 for and 1.40 against. The Reds are bottom of the league but still enjoyed 62% of the ball, which demonstrates how Hope Powell sets her team up to play. Nevertheless, they are a very spirited team, in their previous home game they twice came from behind to draw 2-2 with Reading. Hope Powell’s side are unbeaten in their last three home games now and have held Chelsea and Arsenal to draws this season.

Brighton were promoted to the top-flight in 2018 and have done very well to avoid becoming drawn into a relegation battle. They just about inhabit the middle rung of the league with the likes of Spurs, West Ham and Birmingham, which is commendable given their resources. In captain Dani Buet, they have one of the league’s most experienced and hard-working midfield players, who does a stellar job as a leader and protector of the Seagulls defence.

THE DATA [POWERED BY STATSBOMB]
Despite having 66% of the possession against Birmingham, Arsenal completed more pressure regains [43] than their opponents [42].

Arsenal usually play against deep blocks and look to pin teams back through possession, which probably explains why they have only managed 0.45 counter-attack shots per game- the second lowest in the WSL after West Ham [0.44].

The Gunners are the only team not to concede a goal from a corner in the WSL so far this season.

Arsenal have the best pass completion rate in the league at 85% [Manchester City are second with 82%). Montemurro’s control through possession style sticks out in the data- they average 7.64 deep completions [completed passes within 20 metres of the opposition goal] per game, the highest in the WSL. Manchester United are second with 6.44.

HOW TO CATCH THE GAME
The match takes place at Crawley Town’s People’s Pension Stadium on Sunday, 12th January at 12.30pm. Tickets are available on the gate at £6 adults and £3 concessions. The game is also available live on the FA Player app, free of charge and not geoblocked. If you’re in the UK, the game is also live on BBC Red Button and BBC Online.

It's @BarclaysFAWSL matchday, and we can't wait for you to join us!

COMING UP
We’ll have exclusive player reaction from the game online on Sunday afternoon, as well as the usual preview and reaction to Wednesday night’s Conti Cup quarter-final tie against Reading. As Kim Little and Jordan Nobbs close in on their 200th Arsenal appearances, we might just have some bonus content dedicated to our captain and vice-captain on the site in the coming days too.

Christopher Humphrey
Click to flag and open «Comment Reporting» form. You can choose reporting category and send message to website administrator. Admins may or may not choose to remove the comment or block the author. And please don't worry, your report will be anonymous.

Thorough stuff Tim. I reckon at least one change to your predicted line-up. Jill for Jordan purely because of Jill’s physical strength on what could be a heavily churned Crawley pitch as there is an EFL game there tomorrow. I dont suppose Brighton will burn the midnight oil making it nice and flat for Arsenal to play their passing game on?

Thanks for the preview, Tim. Already feeling a bit stressed about this weekend. That’s the thing about a small league, every game feels crucial.
Here’s hoping normal service is resumed with another 4-0 win.

Question for Tim: is the Foord transfer happening? If so, is she a replacement for Kemme?

Christopher Humphrey
Click to flag and open «Comment Reporting» form. You can choose reporting category and send message to website administrator. Admins may or may not choose to remove the comment or block the author. And please don't worry, your report will be anonymous.

If Kaitlin Foord does come it will be for attacking not defensive cover. Tabea Kemme was effectively “replaced” in the summer with the signing of Leonie Maier.

Stillberto
Click to flag and open «Comment Reporting» form. You can choose reporting category and send message to website administrator. Admins may or may not choose to remove the comment or block the author. And please don't worry, your report will be anonymous.

I think it’ll happen aye, but I don’t think it’s done yet. I think she will make a Tabi replacement on paper given her versatility and ability to play as a 9.