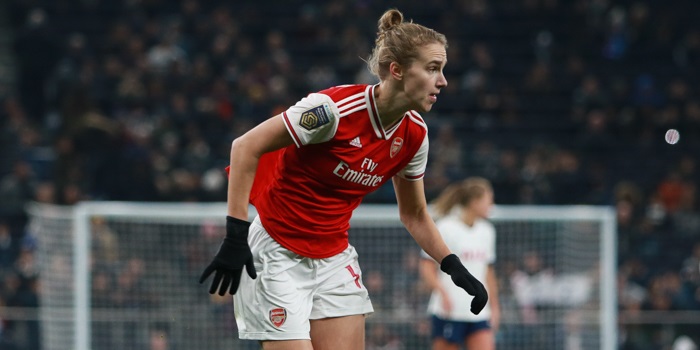 Arsenal striker Vivianne Miedema has been voted December’s Barclays WSL PLayer of the Month. The Dutch forwaard notched ten goals and four assists in three WSL games during the month.

The 23-year old scored six and assisted four in the first game of December- an 11-1 victory over Bristol City. [I wrote about her performance in that game here]. The award was announced by Gunners legend Ian Wright, featuring a nice video from Tifo Football showcasing her qualities.

? Introducing the @BarclaysFAWSL December Player of the Month… @VivianneMiedema ?

Manager Joe Montemurro was also voted Barclays WSL Manager of the Month for December after three wins. Joe was absent for the last of those games away at Everton, taking a leave of absence for personal reasons.

Arsenal Women resume their WSL campaign on Sunday with a home game against Birmingham City, you can read a match preview for that game here– including details on how you can catch the game. Tickets are available on the turnstile at £10 adults and £5 concessions.

She doesn’t win it every month? Surely at least she’s nominated every month!?!

She probably won’t win it in June and July! :0

I should think so, too! Congratulations, Viv Miedema.

What a fantastic month she has. Attacking output she produced was mind-blowing. Mostly in that one match.

It’s too regular now it’s no big deal thanks to her awesome talent, and for her who doesn’t give a shit bout awards, makes it even more of a no biggie.

She is the definition of world class!

Like her Football Supporters Association POTY these are the awards Viv likes because they are voted by the supporters. Her humility is such that she always gives credit to her team mates. Top lady???

Not sure she gives a shit about individual awards like she’s already Said in very clear terms. But yes, she always gives credits to her teammates. Top lady