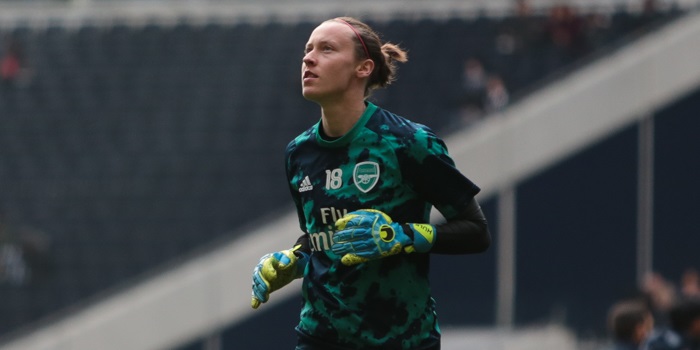 Arsenal Women goalkeeper Pauline Peyraud-Magnin will leave the club with her contract expiring this summer.

The French ‘keeper joined the club from Lyon in the summer of 2018 and made 25 appearances for the club in total. She was the first choice goalkeeper for the Gunners title-winning 2018-19 season.

Pauline joined after two years as a reserve at Lyon with many expecting her to take a similar role at Arsenal, but she soon dislodged previous first choice Sari van Veenendaal. However, last summer Joe Montemurro added Bayern Munich’s Austrian goalie Manuela Zinsberger. Though Montemurro likes to rotate his goalkeepers, Zinsberger has played a much larger proportion of games in 2019-20.

Peyraud-Magnin has been linked with a return to France and Bordeaux, who are managed by Montemurro’s predecessor Pedro Losa.

L’Equipiere is reporting that Pauline will not return to France, however. It remains to be seen whether Arsenal add another goalkeeper, or else entrust the back-up role to highly rated 19-year old Fran Stenson, who also joined the club last summer but spent last season on loan at Blackburn Rovers.

Peyraud-Magnin is not the only player whose contract expires this summer, Louise Quinn’s departure was announced on Friday and there are a couple of other squad players expected to follow them out of the club in the coming weeks.

Pity but understandable. Wasn’t she injured for a while early season which would have limited her opportunities?
From what I saw of Fran pre-season she appears adequate back up for Manu and will probably be happier in that role than a player trying to oust Bouhaddifrom her national team with Olympics, Euros and World Cup on the horizon.

I liked PPM both as a goalkeeper and a character. She was excellent in our title run but probably suffered slightly for usurping the popular Sari v V.
Not a fag paper’s difference between her and Manu imo so unfortunate to become second fiddle. I believe she did break a fingure early season which tipped the balance to Manu. Best wishes to you PPM.

The Gunners have had 3 damn good keepers the past two seasons–but the
club seems prepared to pay only 1 established keeper going forward.

May not be the club’s decision?
Tim’s post does not give a reason beyond contract expiry and PPM may have decided to move on in order to establish herself as number one somewhere with 3 years of International competitions coming up.

BTW, Fran may be young but she seems pretty good that’s why Joe signed her I guess.

Why comment then?
I happen to care about anyone who represents The Arsenal.
If you think the women’s team doesn’t matter that reflects pretty badly on you.

I care about Aubameyang. Not this.

I’m not overly fussed about the men’s teams but I don’t post derrogatory comments on their part of the blog.
If you are a true Arsenal supporter you should care enough about all of their teams whether Academy, under 23 or First Teams to treat all of the players and fans with due repect.

Its the Arsenal
Reply to  Goonergeoffers

Then you are on the wrong page, twit. Get lost.

Who are the players who running out of contract?