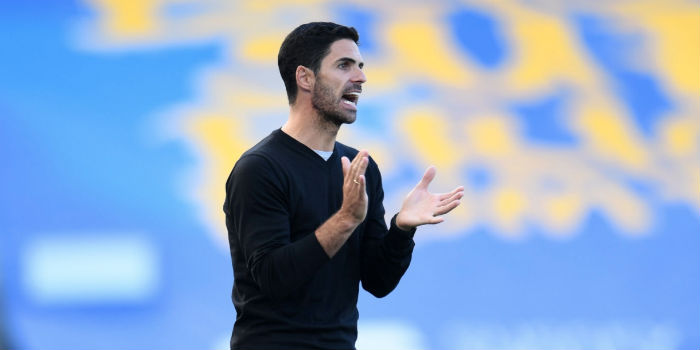 Mikel Arteta says he has a clear idea about the type of players he needs, however, all transfer talk is effectively on hold until the summer when the club’s financial situation is clearer.

The boss has said repeatedly that he needs to strengthen his squad when the window opens but with matchday and broadcast revenue like to take a hit because of the Covid-19 situation and uncertainty about whether we’ll qualify for Europe, trying to guess how much cash we have to spend is anyone’s guess.

Patience is very much the name of the game, even though some sides, including Chelsea and Bayern Munich, are approaching things very differently.

“I have a very clear plan and the specificity of the players and squad balance that we need to compete with the rest of the top teams in the country,” Arteta told press ahead of Saturday’s game with Wolves.

He added: “We don’t know how the market is going to be. Obviously, we are putting different plans together to see what we’ll be able to do.

“At the moment, the uncertainty is still big, the way we’re going to finish the season will dictate a lot of things financially as well. We have to be a bit patient and see what happens.”

One thing is clear, Arteta doesn’t want to have to offload star names to top up his budget.

“We’ve seen different things,” he noted. “The way that Chelsea is dealing with the market is different to the rest at the moment. Bayern Munich as well are looking really aggressive so I don’t know.

“We cannot be a team that has to sell it’s best players to try to bring in and improve our squad.”

One of the areas of the pitch where we’re arguably overstocked is in the centre of defence.

Despite the potential of starting next season with nine players who could play centre-back, Arteta, for the second time this week, stressed that with some of those options nursing long-term injuries it’s difficult to say for sure if he’ll get rid of any.

“William [Saliba] has had injuries as well, he’s not been stable playing in that sense, so let’s wait and see.

“At the moment, we’re going to have options but we’ll consider the situation and what is best to do in the future. But we don’t have much stability there at the moment.”

On the subject of Saliba, Arteta was asked for an update about the tug-of-war that’s currently taking place between Arsenal and Saint-Etienne. The Ligue 1 side are desperate for the defender to play in the Coupe de France final on 24 July but Arsenal will only let him do so if certain medical requirements are met. There’s also an issue surrounding a bonus payment we might have to make if he starts the match.

“As you know both clubs have had some conversations,” said Arteta.

“At the moment they’ve not reached any agreement for him to be able to play in the final.

“At the end of the day, he’s our player, we want the best for him and we want to protect him and we want him in the best possible condition when he joins us. That is something that is being dealt with at club level.”

Call me crazy, but I think a big signing will happen this coming window

Yup i heard the rumour too. We will be england chapions cos we sign a quality centre back and GK. Samba and frey.

But Sambar and some fries is all we can afford, unfortunately.

Getting your way is about relationships and networking. If I were the Kroenkes I would feel more confident of handing an honest cool guy like Mikel my hard earned cash after a pleasurable meeting with his rounded intellect and experience . So I’m saying my money’s on Big signings happening or at least Mikel having the support for what he needs to a safe level (from the point of the Kroenkes).

If Saint Etienne wants us to let him play – which we don’t have to do – and also wants us to pay them 2 million quid for the privilege of giving them something not required by the contract, they can fuck right off.

They should be paying us 2 mil if they want him to play.

Well, here is The News. We’ve got a billionaire majority shareholder (I steadfastly refuse to refer to the cunt as an ‘owner.’) But, due to the penny-pinching ways of our very own Mr Potter from ‘It’s A Wonderful Life’, we haven’t got a pot to piss in – especially when it comes to making signings worthy of this club. Or what this club used to be. Kroenke Out. And all that jazz.

Kroenke isn’t taking money out of the club a la Glazers etc. – he’s just not pouring tons in = we have to function like 99% of football clubs and live off what we generate. We had an extremely high wage bill and have spent quite a bit on transfers the past 5-6 years. The 2 main issues really are down to: contract management was an unmitigated disaster which meant while we spent a lot of money we really got virtually nothing for outgoing players. That doesn’t really work well if you’re self sustaining. The other issue is we haven’t… Read more »

Under arteta Mustafi has been pretty solid though. Maybe it’s instruction. ?‍♂️

No organism thrives in a toxic environment. Luckily Mikel is an organic, clean energy guy

Arteta, the biofuel to Mourinho’s fracking

Mustafi looks much better than he did under Wenger or Emery as he has knock on wood seems to have cut out the major error every game. Has he been remotely worth what we paid for him – no. If you’re a self-sustaining club you just can’t afford to keep paying star money for very average players

You’re the wisest guy in the world.

Unpopular opinion: we’ve spent a lot of money in the last 5 years (3rd highest net spend), and have a pretty high wage bill. Why is Kroenke the problem, rather than the executive management?

Who appoints the executive management?

Lacazette, or Guendouzi for Partey would be nice.

If funds are tight, getting Ake from Bournemouth and Cantwell from Norwich might be a cheap option.

None of those are cheap

Cantwell is a Canary – so he might be cheep.

Godfrey from Norwich too. Good defender with a tremendous strike. Half the current centre backs should probably be moved on.

Wish you all the best in the coming transfers Arteta

He’s not reading this. send him a text.

I also feel it’s down to his positioning. He always seems tightly marked when receiving the ball but on the other wing – saka or tierney always has time to look up, turn, assess options etc. Kola suffers the same problem, always seems to be around an opposition player when he gets the ball.

On the subject of defenders, what’s the word on Zech Medley? Seems to have dropped off the radar as a potential breakthrough player