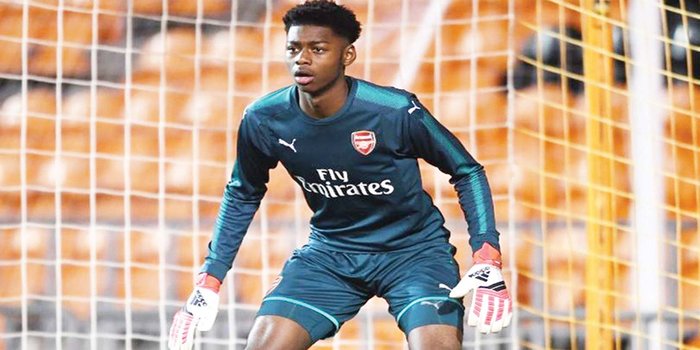 Arsenal U23s still haven’t played since March but Arthur Okonkwo has endured an even more frustrating situation, with the goalkeeper having not featured for over a year.

The 18-year-old wasn’t able to play due to a health issue but it was a welcome sight to see him back in training with Steve Bould’s squad at London Colney yesterday.

Prior to his setback Okonkwo looked a near certainty to eventually become Arsenal’s third-choice goalkeeper after he produced some outstanding performances towards the end of the 2018/19 campaign.

Tall and a good distributor of the ball, he possesses excellent reflexes and organises his defence well.

It isn’t currently clear exactly when the U23s will play again but the hope is that they will be in action at some point in September.

Okonkwo will hope that he will be able to play regularly, although he will acknowledge that there is a considerable amount of competition in the goalkeeping department.

Karl Hein is very highly rated by the club and has been training with the first-team in recent weeks. The Estonian also warmed up with the squad ahead of the FA Cup semi-final against Manchester City at Wembley.

James Hillson will also be looking to make an impact having been used sparingly in his first full season at the club, while Tom Smith is back available too after a spell on the sidelines.

Deyan Iliev, meanwhile, is back from his loan at Jagiellonia Bialystok but could well head out on temporary transfer again.

With at least four U23 goalkeepers and others looking to push on from the U18s, not to mention Matt Macey occasionally needing game time, it seems unlikely that Okonkwo will be able to play every game, as he was doing when he was last fully fit.

However, after the difficulties that he has endured over the past year, simply playing at all will feel incredible for him.

Good to see him back, been a long time.
Surely Iliev is going to be sold this summer.
I.d like to see Macey go out on loan to see what he is capable of, but it is complicated by the fact he is homegrown and Hein is not as yet.

Macey was out on loan at Plymouth Argyle and by several accounts was awful and quickly dropped.

Who do you guys reckon deserves the Player of the Season award? For me it would be Leno due to his consistently good performances.

I would choose Auba14 or Saka7

Talking of consistency, Auba have been very consistent in doing his main job (scoring goals) over the years.

We have a lot of really good young keepers at the club. Does this mean we really need to sell one of Leno or Martinez to generate some cash in a trying time and also to advance one of these young guys to keep the development wheel turning? I’m starting to think yes. Leno is a class act and would probably generate A LOT of interest and money in the transfer market. Martinez has show he is exceptional. People talk about it being short term, but the consistency he has shown in his 10 or so games has been phenomenal… Read more »

I think you’re probably right that 1 should go. If we can translate the funds received into a quality CB or CM, then chances are that would win us far more points than having a great backup GK You could make the argument that 2 similarly matched keepers could push eachother to new heights. But equally, the constant pressure could throw them off their game. Keepers thrive on stability, allowing them to play proactively and instinctively without having to worry about being dropped if a marginal decision goes wrong It would be harsh on the one sold, but then you… Read more »

Good to see him and many of the fantastic talent arsenal have back. I hope Arteta continues to give opportunities to promising youngsters!

Arthur is a fantastic talent, one of the best keepers we’ve produced in recent times. Great to see him back.