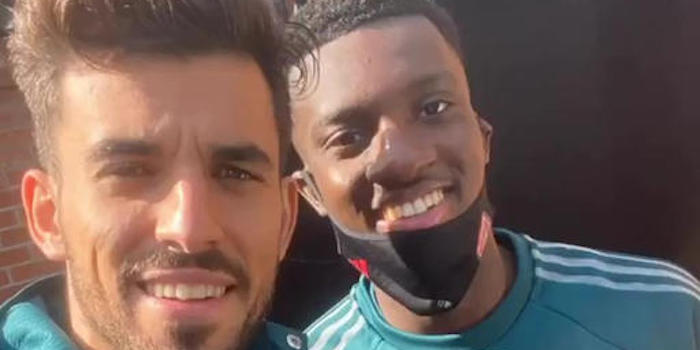 Mikel Arteta says his first impression of the footage of Eddie Nketiah and Dani Ceballos clashing in the warm-up at Fulham last weekend wasn’t positive, but after speaking to the players, and understanding the context of the issue, he was pleased with how it was resolved.

The two players were obviously fired up, perhaps frustrated that they weren’t starting, and after some pushing and shoving they were separated by coaching staff.

It was shown on BT Sports, making it a talking point, and the Arsenal boss admitted he’d prefer if things like didn’t happen publicly, even if it was very much a storm in a teacup with the players making it clear there were no hard feelings with a social media post after the game.

“I was surprised first of all because it’s not a common thing to see,” said Arteta ahead of Saturday’s visit of West Ham to the Emirates.

“At the start to be fair, I didn’t like publicly too much that image. Then I understood what happened, I understood how much they both wanted to play and the level of frustration they were managing.

“But I really liked the way things were resolved. First of all between them personally, and then publicly with that picture.

“End of the story! Let’s learn from that and move on.”

Arteta also pointed to the way both players contributed when they came on as evidence of their commitment and desire to play.

“You can see the way Dani came on the pitch, the same with Eddie in the last few minutes, how committed they were.

“You know, I can’t demand the players to be all the time at 100% – pushing and pushing – but then to be soft and have a really bad body language during the rondos.

Lol, loving it from the boss.
“Not killing each other”

Var Will Solve The Problem
Reply to  Aaron

That’s how the Invincibles used to train as the story goes.

Anonymarse
Reply to  Var Will Solve The Problem

Almost killing each other

And by “each other” we are referring to Roy Keane..

No they were actually trying to kill him

The Arsenal
Reply to  Var Will Solve The Problem

Fabulous
Reply to  Var Will Solve The Problem

Lauren and Vieira during the PSG loss. I really don’t mind at all. Big personalities they’re never gonna back down. But it’s how you move on after.

May I point to the double standard here? Guendouzi was frustrated by a loss, the injury to his keeper and grabbed an opponent (not a teammate) by the neck and was excluded from the team.

I’ve been watching the Michael Jordan doc and there seemed to be a lot of arguements behind the scenes because of how competitive it was. If both players can apologise to one another and move forward it can be a good thing.

I think the difference is how each of them reacted after the incident. Sounds like Ceballos and Nketiah apologised and moved on.

Guendozi was trying to give it the big licks on the pitch at Brighton like a petulant little prick. And has rowed with Arteta previously. How is that similar to this instance?

There is no double standard at all.

Arteta has some head on his shoulders for such a young guy. He has carried himself impeccably since day one. He will be some asset to the club in the years ahead.

Up voted, and not just because of your name.

I hate to reiterate this, but we will have a hell of a time keeping Barcelona and everyone else’s dirty grabby hands off Mikel.

If we back him he will go nowhere. Arsenal is a great club in a great city. With the right backing the sky is the limit!

If we back him. Hope Stan is reading this.

You have a point but which top club will give him the freedom that we do? The only way I see him moving on is if he has done his max here – a league or a European titles – and feels he has maxed out his equity with the squad, something that happens with top coaches (Klopp, Pep, Ancelotti). Or maybe he has the ambition of being the next Arsene – synonymous with one club. Early days. Barca have Xavi, Real have Raul and Ramos after Zizou lined up. Bayern have a beady eye on Klopp. PSG and City… Read more »

Mikel’s magic is working so much that some bigger ‘ahem’ club might try to steal him from us. We’d have a hard time keeping ahold of him if the offers were too good to turn down.

Up voted, especially because of your name.

Nothing wrong with spirit, on balance it’s better to focus it on the opposition and on the pitch though.

Suitably diplomatic response from Arteta. I bet he wasn’t so diplomatic with the two players in question when he had a chance to speak to them privately though. I doubt either of them will be doing anything like that again.

It’s a measure of how desperate the media are for ‘content’ that they make a mountain out of a molehill over this.

But that’s exactly why, despite his careful wording, Arteta won’t have been pleased with the incident. Anything like that gets overblown and therefore detracts from the other, much more positive work, that’s underway at the club. It’s fine Gooners saying that they love the “spirit” that such incidents appear to show but managers/coaches don’t – and I’m sure Atreta has made that clear (in private, of course).

Angry Birds3, but we don’t need a sequel.

They should learn to rein in their emotions – Ceballos and Nketiah.

Yes, they should be utterly soulless robots who never make mistakes.

PPS I do hope the rein/reign joke isn’t lost amongst the vitriol and mirth. Now I’ve drawn attention to it, I suspect it will be. *sigh*

Before you bash someone else, go learn the meaning of rein

I like it, I like a bit of fight and when the day comes and they are both playing they will be using that fight not against each other but against the opposition. More power to them.

Get in lads, well done!

Yet another masterclass in communication from the gaffer!

It looks Ceballos can disconnect the brain too quick at times. I read he once took to the social media how he wanted two regional nationalist teams in Spain being eliminated when these two teams where facing each other in a stadium. He was very young at the time. Myself, I had said things I wasn’t proud of.

How does this man always say the right things!!

Mikel just know how to answer everything without involving his emotions or saying extra. My manager…

Love the way the boss handles this type of issue. He is a “proper’ manager

Arteta has such a talent for striking exactly the right note. He’s the best since………Wenger!

Imagine having a manager who comes across as an idiot or an entitled arrogant egomaniac who demotivates his own players with his words.

Did you have to write ‘Jose Mourinho’ in so many words?

Will be good to give Nketiah some opportunities. He has first half of season. Likely (Unless Juve come in) Laca will stay on.

Then Martienlli due to cycle in next year.

So Nketiah needs to impress this first half. Eventually he may suceed Laca next season BUT no guarantees we don’t bring in someone like edouard from Celtic if he does not step up.

This is a good thing all round for us. We need competition at least two for each position.

For Ceballos, we will have to consider how much he will cost next summer. MOney spent this summer (PLUS continued commitments to Saliba/Pepe) mean we have to be careful working out what can be moved on next summer (Likely Laca maybe Bellerin if Cedric and AMN convince enough) vis-a-vis money going out to replace these players as well AND confirming on Ceballos.

Not sure if there is an option to buy but if he performs for us this season, he won’t be cheap.