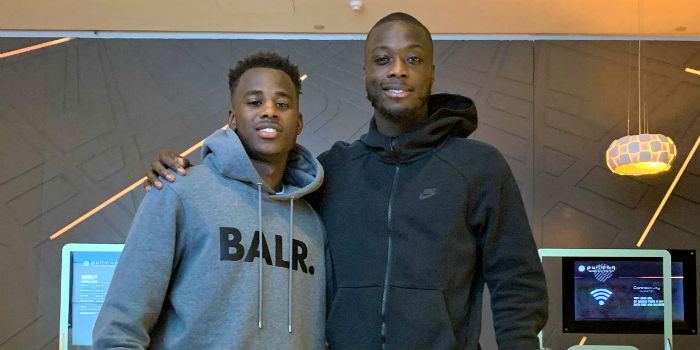 George Lewis says he’s working as hard as he can to get more first team opportunities at Arsenal after enjoying a taster in pre-season when he came off the bench in the 4-1 friendly win over MK Dons.

Signed as a free agent after a couple of years in Norway’s lower leagues, the winger knows he has his work cut out persuading Mikel Arteta to take a chance on him at senior level. That said, after scoring on his debut for the under-21s as they beat Ipswich Town 2-1 in the EFL Trophy, the signs are positive.

After the match at Portman Road, the 20-year-old spoke to homeland publication iTromso about last night’s performance.

“It was a really, really tough match,” he said. “I don’t think anybody expected us to do so well and go on to win this match. We had a bad start to the game, so to get that goal in stoppage time of the first half gave us the momentum to push through for the second goal at the start of the second half.

“It [the EFL trophy] is a tough tournament with a lot of good senior sides from League One and League Two.

“It’s academy sides against senior sides, so it will be a huge achievement if we were to go through to the knockout stages from that group.

“For a lot of players, this tournament is really important. Some players are in a position that they want to play first team football, and to play games like this with boys against men, they’re really important to show that you can play at the senior level.”

He added: “I need to keep my head down and work even harder on the things I need to improve in my game. I need to forget what has been and focus on what’s ahead. We got a new game already on Friday with the under-23s when we have the season opener against Southampton, so it’s not much time to dwell on what’s been so far.”

Given the competition ahead of him at London Colney, it’s likely that Lewis will have to settle for occasional training sessions with the first team and the outside chance of making the senior squad in one of the cup competitions.

“I’ve trained regularly with the first team, but it’s a bit more in and out now that the season has kicked on,” he revealed.

“My ambition is to be a full-time member of the first team and get on play games within this season.”

Interestingly, he’s already struck up a rapport with the club’s record-signing Nicolas Pepe. Having arrived at the club last summer, the Ivorian knows what it’s like to settle into London life, so it’s a relationship that Lewis really cherishes.

“Pepe’s become a really good friend and is like a big brother to me,” he said.

“Of course, there are other players I get along with too, but most of all it’s Pépé. First of all, he’s a really good guy.

“He’s also a phenomenal footballer and we’re quite similar people on and off the pitch, so he’s really helped me settle here. That we both speak French also helps a lot.”

Thanks to Tobias Stein Eilertsen for sharing and translating his interview with George and for sending over the accompanying picture.

Has anyone else noticed that on George Lewis’ wikipedia page, he apparently died in 1981

Keep working hard George. Like the attitude. Hope he can become learn lots of tricks from Pepe.

Get them to act in an odd couple spin off drama called “Pepe & the Pup” and sell the rights to Amazon for £54 million… sign Aouar. Thank me later.

Join the board already.

Salibaba and the Forty Thieves
Reply to  Sac, Lac & Craic

Sac, Lac & Craic
Reply to  Salibaba and the Forty Thieves

Thank you, thank you. I’ve been on the phone with Josh this morning. I told him I’d only take a place on the board if they considered my plans for mandatory aerodynamic haircuts.

You’ve had the Invincibles but under my stewardship expect “The mulleted bullets.”

A really positive vibe from this article.

Hopefully one for the future. ?

He’s highly rated. One of those that will make it to the first team. Big competition for our other young wingers cos this guy looks like a real baller and he’s determined to seize his chance..

Wishing you all the best, Lewis.

Took his goal well. Cottrell and Azeez impressed me.

Does anyone know how many languages George speaks? Sounds like quite the linguistic.