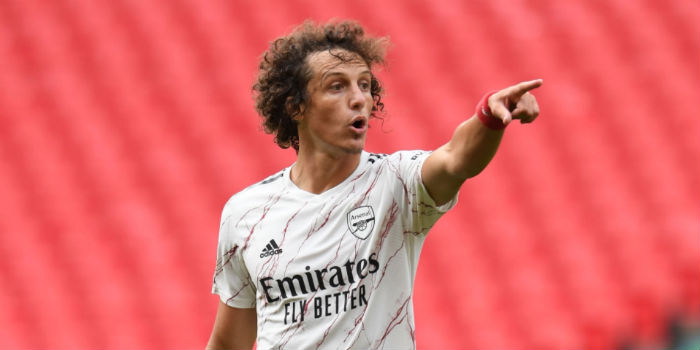 According to The Athletic, David Luiz is a doubt for Arsenal’s season opener with Fulham after picking up a neck injury in training.

David Ornstein writes that there’s a chance the problem could keep the Brazil international sidelined for ‘an extended period’ but that he could be fine if he ‘responds to treatment’. I think we can agree that’s the definition of hedging your bets.

EXCL: David Luiz a major doubt for Arsenal trip to Fulham with neck injury that could rule him out for an extended period. Depends how responds to treatment but very delicate + likely to be a late decision on Brazilian centre-back @TheAthleticUK #AFC #FFC https://t.co/fczvQ1l74L

A video of Arsenal training this morning, filmed by Sky Sports, appears to corroborate Luiz’s absence.

Guendouzi & Ozil train with Arsenal with their futures at the club still in doubt! pic.twitter.com/cgTOqz7GIN

The Gunners are already missing Shkodran Mustafi, Pablo Mari and Calum Chambers due to long-term injuries and Sokratis is believed to be on the verge of a move out of the club.

Gabriel Magalhaes and William Saliba are fit for selection but Mikel Arteta may be reticent to start the new boys together so early.

That could mean Kieran Tierney is asked to feature in a three-man backline with Rob Holding, who now appears set to stay at the club for the year despite interest from Newcastle, also featuring.

Most of Arsenal’s players, even those who played last night for their country, reported for training this morning.

After promising that all his players had a fresh start ahead of the new season, the lesser spotted Matteo Guendouzi, fresh from captaining France under21s to two victories, took part. As did Mesut Ozil, who has featured in a couple of pre-season friendlies.

Bit of a stretch … but a missed opportunity for some form of Braz-Neck / brass neck gag.

Luiz giving away six penalties last season was a pain in the neck for all of us, now he knows how it feels.

More of a pain in The Arse actually…

A bit of a stretch is what caused it buddy

Can’t wait till Saturday! Lets start the season off nicely win 3 points and a clean sheet 🙂

No Mustafi and now no Luiz.

Your dreams of a clean sheet might not be entirely unfounded…

Unleash Sabriel on them!

I agree a back three might be the best way to give them some debut breathing space, but there’s no reason why both players shouldn’t play.

Who the hell could down vote this – other than one of Mustafi’s brain dead disciples.

is it any good ? never heard of it.

I first read it when I was in middle school, so it’s not particularly challenging or high literature or anything. But I recently read the whole series again and it’s still very entertaining fantasy. The author does a great job of building the world and keeping a high pace. Would recommend 🙂

I hope so. He’s in my fantasy side.

You’re not a RHLSTP fan, are you?

Am glad guendouzi is back. lacks positional discipline but if he keeps his focus, he’ll get there.

Never mind him, get Mesut Ozil back in the thick of it.

Form is temporary, class is forever. ?

Oh yes, Scrapper Özil, he loves being in the thick of it.. especially if it’s a mid-week game up north somewhere – good call! ?

He has 2 types of poor positioning imo. Firstly he makes a lot of unnecessary runs and pops up in odd areas of the pitch, taking himself out of the game completely when we lose it. But there’s also his awkward body position and shape whenever he challenges someone, either running at him or with their back to him – he’s very square on and easy to turn. He also needs to learn to evade pressure better and be more efficient with his touches. Compared to Xhaka for instance, clunky as he can sometimes be on the ball, has a… Read more »

I thought you were talking about Luiz for a second, before I re-read the post above.

I wouldn’t know where to start with his faults!

(although his strengths often make up for them tbf)

Spot on! His main job is positional discipline and awareness as a DM.

In 56 league matches, he has produced 0 goals and 1 assist. We only win 43% of the time with him on the pitch.

The City matches sum it all up. He plays in the 3-0 loss and KDB has a field day. He doesn’t play the next 2 and KDB is mostly silent. Not a coincidence.

We had our Corporal Niles to mark De Bruyne in those two instances Guendouzi didn’t play against City.

Well, yeah. If one player doesn’t play, another has to. That’s kind of how it works. The point is that AMN did a much better job marking KDB out of the game.

What do you think?
Thumbs up for back 3
thumbs down for back 4

Yeah, a back three. The new lads plus either Tierney or Rob Holding.

Got saliba in my fantasy premier league, hope it’s a back three

And the win too of course.

I think you should save this type of shit for another site.

This is why we have a squad.

Now stop trying to sell everyone off! We ain’t THAT poor!! ?

No demand for French U21 captain? Come on Emery, what are you waiting for?

Maybe we should send him on a season long loan.

Under Arteta we beat Liverpool, ManC and Chelsea, but we struggled horribly with the lower league teams. Our midfield was the main problem and that has not changed. I won’t take Fulham for granted.

Our midfield was NOT our main problem! Our defence – particularly our central defence has been our problem. For the past decade. Soft Goals R Us. No team conceded as many goals from set pieces as Mustafi and Co. last season. Too many people have an obsession with a midfield that already has Ozil, Pepe, Ceballos, Xhaka, Torreira, Saka and Martinelli – and yes, even lesser talents like Willian, Guendouzi and Willock. With a decent defence now behind them, enabling them to play, that should be more than enough to create chances in the channels for Auba, Laca, Eddie and… Read more »

I agree that our defence needed a boost and we got it though Saliba and Gabriel will take time to gel and they are still quite young in a position that requires experience. But I believe that so many of the crosses leading to goals or passes into the area went through the midfield way too easily. This was especially true of the lower league teams in which we came out to play. I think our defence has been crying for a strong DM for some time now.

What is Arsenal if there’s no injury?

I noticed Xhaka in trainers not training in the training pics. Injured?

Nah, he was given the day off due to the 2 international games he played but he still came in anyway to be around the team.

Played both internationals for Switzerland, was apparently given the day off but pitched up to watch anyway. There’s lots of positivity at the club with Arteta, it’s nice to see.

Same for Leno, but no one noticed this…..

Dunno, hard to pay attention since the guy reporting reminded me too much of Alan Partridge.

Good to see Chambers back training in the group, he did quite well under Arteta before injury.

HA HA, Remember Arseblog comments , something like “we have trillion central defenders..” .
Apparently, not that much right now 😉
Guess SOMEONE jinxed it again 😀

only Arsenal could have an abundance of CB’s , and then have to play a LB at CB! but he does do a banging job , so fair fucks.

We could be in for an Ozil and Guendouzi revival. You never know.

We can hope, who knows as you say. It would be great for everybody if Ozil in particular could actually kick a ball in anger (and not only in a friendly) for the club on a few occasions at least. It would ease – but only to a minuscule degree – his reported £18.5 million a season salary, wouldn’t it.

Ozil has really done nothing wrong. He’s trained, sat on the bench when required, and posted two nice congratulatory notes to his teammates when we won the Cup and Shield. Guendouzi, on the other hand, threw one fit after another and posted a vacation picture without even mentioning the cup win. I think it would not be good to forgive this. I haven’t even quite forgiven Xhaka. I say do whatever is possible to get rid of him.

I think David Luiz should be converted to a standing 4. Luiz is fluid, a good passer of the ball and can be solid. There’s no need of buying Thomas from Athletico.

Arsenal needs another creative midfielder if Ozil won’t be available rather than buying a 4 if they can convert Luiz.
My opinion anyways.

Which means 3 relatively new Cbacks to bed in. There’s risk. And if we should fool around try and generate income by selling Bellerin, that’s even more unknowns at fullback. Neither Soares nor AMN have shown sustain success in the positions. We are not thinking correctly. I would sell one of the keepers and one of Auba and Laca (whoever fetches higher price) Then hopefully peripherals can generate 40m. Torreira 22m interest seems stalled. Kolasinac cannot be sold if we sell Bellerin otherwise maybe 12m We don’t seem to have good direction in Sales. But we are also risking at… Read more »