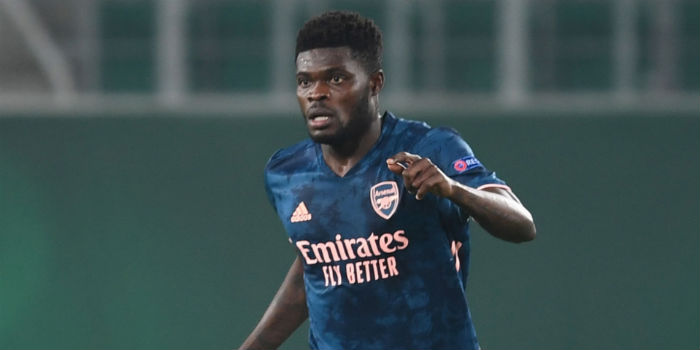 Mikel Arteta paid tribute to Thomas Partey after the Ghanaian impressed on his full debut as Arsenal beat Rapid Vienna 2-1 in Austria.

On a night when the Gunners struggled to build any real momentum, the €50 million signing barely put a foot wrong in the centre of the park, winning loose balls and keep the play ticking over.

The 27-year-old’s performance was all the more impressive given he’s only trained for a week with his new teammates. The boss believes it bodes well for the future.

“I think he held the midfield by himself in the second half as well when we were a little bit more open and we started to take more chances attacking certain spaces with some players.

“But I think he was fantastic tonight and there is much more to come from him obviously.”

Partey’s next challenge will be to replicate the trick in the Premier League.

The Gunners face Leicester City on Sunday night as they look to bounce back from last weekend’s defeat to Manchester City and Arteta hopes his teammates will help him share the burden of expectation.

“Yes of course [there’s pressure], but he needs his team-mates around him. It’s not about him,” said Arteta.

“Obviously we know that with the price that we paid for him and the profile that he has, he is going to have a lot of people looking at him in every single game.

“But it’s about the structure we have as a team, the flow, the unity and the cohesion that we need in our team and he is one piece of that. Hopefully, he is a big piece.”

You don’t even know if these headlines about Partey are attempts at making a pun or just a happy accident… that’s how sweet his last name is. xD

Var Will Solve The Problem
Reply to  ElGunnerLoco

Game changing player. Now finding the right balance around him… Starting with the shift to a 4-3-3 that his signing has really facilitated. No better time to do it than against those sly foxes.

Var Will Solve The Problem
Reply to  Daveo

I thought Mo Elneny played good too, and had the telling contribution of the game with that through ball. Both of them were really good defensively, slotting in the gap left by Kolasinac/Cedric/Bellerin. Not sure if it was one of the “Best Debut Anyone has ever seen” as per Owen Hargreaves…but very solid. May be with Ceballos/Partey/Mo Elneny together we will have better balance in attack and defense. Rapid figured out a way to nullify us by pressing us on the wings and giving us no outlet. We were just forced to go back and recycle on the other wing.… Read more »

Chamakhyungpark
Reply to  Var Will Solve The Problem

I think our best three in the midfield includes Mo.

Daveo
Reply to  Var Will Solve The Problem

Elneny was excellent and he has been all year. Massive credit to Mo!! He is really pressing Ceballos and Xhaka for the starting spot alongside Partey in that double pivot spot moving forward. I 100% agree with you though it shouldn’t be three of these four if we move to a 4-3-3, but two as the double pivot behind Saka as the hard-working #10. Comparing the three: Mo to Ceballos – Mo is a little better positionally and tactically; Ceballos is a little better creatively and generally a little ahead in progressive passing; mobility is pretty even; ability to drive… Read more »

willock would be if he could step up his game, late runs from deep party looping balls over the top

Agree with you that Willock is a goal threat with his late runs. And agree with you that he need to step up his finishing abilities when he got those opportunities. Currently aside from Auba, we lack a consistent goal threat that strike fear into the opponents in and around the box. If things dont improve, other teams will start to figure out that stop Auba and we will stop Arsenal from scoring….If this happened in the next few games, I think Arteta should consider giving Auba a free role within the middle third of the pitch so that his… Read more »

He really was only in 2nd gear tonight. I hope Arteta gives him the keys to the midfield car from now on. Because it’s gone from Ford escort to Porsche overnight.

Even though we’re not the most fluid team in the league right now, I’m sure Thomas will enjoy being able to express himself more than he was able to Atletico.

It was a good performance from him, unfortunately the referee kind of curtailed him after the yellow card and fouls called against him.

You could tell the boys were not used to playing with a crowd again given the incidents at the back we had.

God is a Gooner
Reply to  Salibaba and the Forty Thieves

What a total nob that ref was!
The czech mike dean.
He’s probably in the shower right now waving his little cards infront of the mirror.

Salibaba and the Forty Thieves
Reply to  God is a Gooner

A Different George
Reply to  God is a Gooner

My favourite moment was when he whistled against Saka for what might have looked like a handball, but absolutely wasn’t–an error, but all refs make errors, I can live with that. But then he threatened Saka with a card when Saka (who genuinely seemed to have no idea why the whistle blew against him) questioned him. That was the Mike Dean moment, the assertion of his authority for absolutely no reason.

This website can use each Partey/party pun once and only once. When the site has run through them all, come the end of the season, that’s it. No more!

I bet you’re fun at parteys

In print that doesn’t even make sense. You’re doing it wrong.

Change the name to Elneny and one wouldn’t bat an eyelid.

I think Partey played well, very tidy and balanced, but hearing some pundits saying that was the best debut is over the top. He was good, and nothing more. We shouldn’t put too much pressure on him, give him 10 games and let him gel with the team first.

Partey was great but afterPartey gonna be awesome?

I’m going to Partey’k in stupid puns until I’m hounded out of the internet.
I’m certain this will not get tired fast.

Favourite thing in the match reviews from this game is Cedric’s face in the player by player match ratings. So, so mean. But very, very funny.

It’s a genuine oversight, but I get how it’s funny!