It wasn’t great but it was a win in what should be the hardest match of the Europa League group stage.

It is growing uncomfortably familiar to say things like the above. Arsenal play pretty poorly, scrape a out a win that isn’t entirely deserved with just enough of an attack, and we all kind of try to forget about everything we just saw.

This was certainly a match that isn’t going to get a lot of rewatches but I think that there is a least one positive in that we got to see a good performance from Thomas Partey in his first start with Arsenal.

Rapid Vienna 1-2 Arsenal: By the graphs 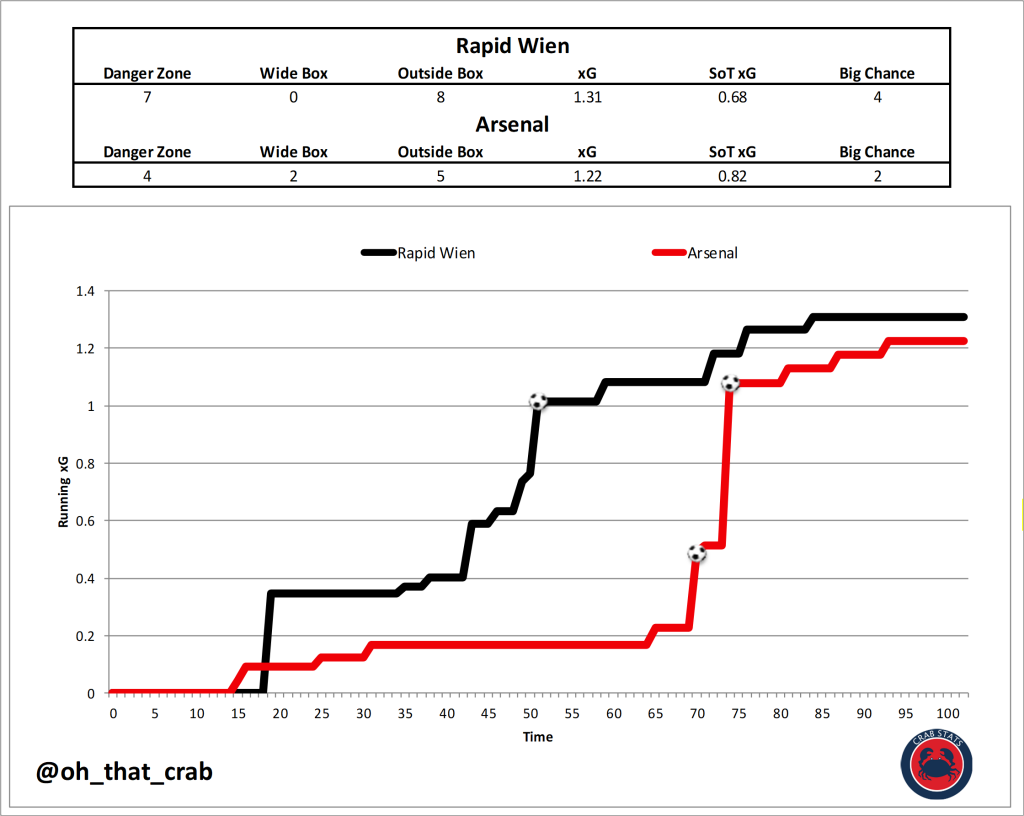 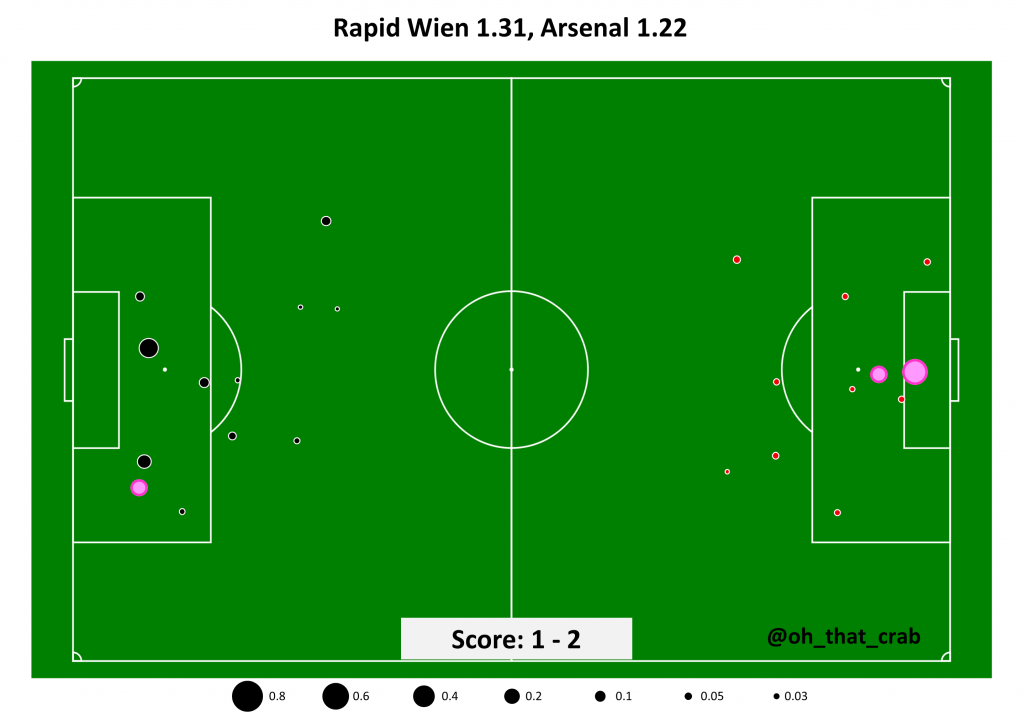 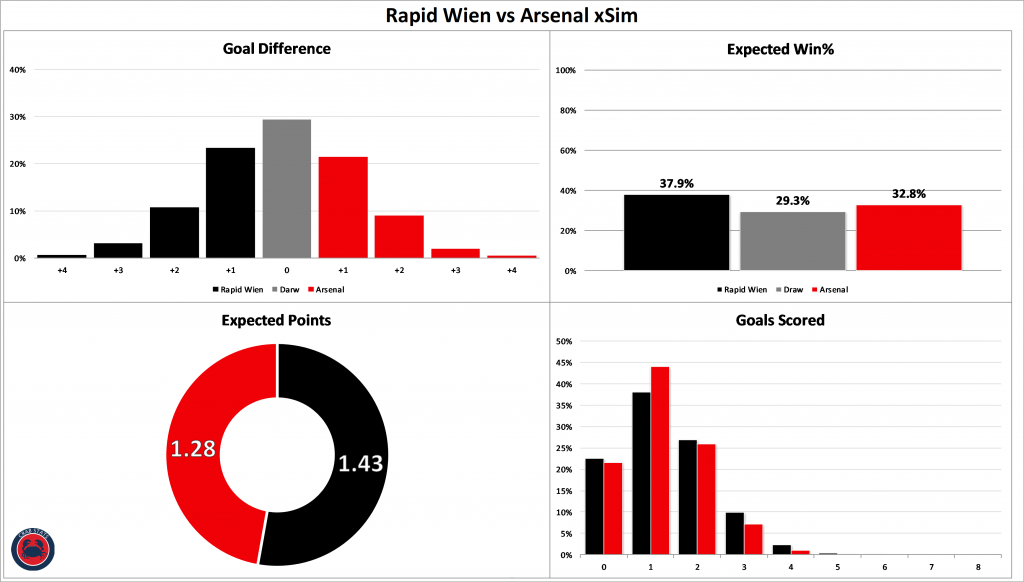 11 – Shots for Arsenal in this match, with 6 from open play

31 – Touches for Arsenal within 25 yards of the goal, 4% of Arsenal’s total touches

This match was another one where the attack left something to be desired. It has been almost a full season of Mikel Arteta and we keep having the same things pop up, not enough shots, not turning middle third possession into dangerous possession and so on.

In this match, to my eye the main issue really looked like one of the main issues was that Arteta chose to put a penatly box poacher on the left wing and that is where a lot of possession went to die. This problem is slightly different but it really ryhems with what we have seen in other matches where Arsenal’s best goal scorer too often finds himself by the corner flag trying to whip in crosses to an almost empty penalty box.

It feels like sometimes that Arteta is over thinking things with where he is playing Arsenal’s attackers, especially against teams that Arsenal should be heads and shoulders better then.

3 – Passes completed into the box, 2nd on Arsenal

It wasn’t the sternest of opponents but in this match, Thomas Partey excelled making his full Arsenal Debut. He did a little bit of everything in this match and looking very comfortable in the middle of this Arsenal team. What really stood out to me in this match was that he was almost always looking to play the ball forward when he got the chance.

I have already gone on about wanting to free up Arsenal’s ability to attack, and the addition of Thomas Parety is something that I hope will allow for more of that in the future as he becomes a more integral part of the Arsenal team.

Sources: Opta via WhoScored and my own database

Previous articleArteta: Partey’s only just getting started
Next articleLuiz on the win, the formation and playing in front of fans

Arteta:January transfer activity would be ‘helpful’

not great, onwards and upwards!

Nice work Scott, the article is a little shorter than usual.

I’m not surprised Partey was leading the Arsenal team in many of these metrics, it’s in line with his numbers from last season.

It is however a reality check when a midfielder from Atletico, a team us Premier League fans consider boring and defensive, ends up being our most progressive player on the pitch.

What does that say about our midfield? Is this even something we can purchase our way out of?

Mourinho seems to have turned the smallest team in London into free-scoring lunatics, so maybe that’s not such a bad thing

Much to be said about what resources he has at his disposal. Considering current economic situation of the club and disruption that we had since March, I believe we as fans should be more circumspect and on human/professional level give him more time to establish his ideas. One thing is sure that he wants to build on defensive solidity which is appreciated but need some injection of attacking precision soon. In my view we should be able to more attacking side next season.

Robh
Reply to  Salibaba and the Forty Thieves

While we think of Atletico as defensive, their midfield options have been world class in the last numbers of years. We were linked with Saul for a few windows, who was excellent. Partey and Koke each excelled for years. Gabi was excellent. They got to two Cl finals and their mf doesn’t get enough credit for that.

Salibaba and the Forty Thieves
Reply to  Robh

I 100% agree with everything you said. Their midfield is quality and Partey shows just that.

I still prefer the EPL over La Liga because it’s more equitable (so far) than the other top UEFA leagues. We just need a reality check sometimes.

I hope Arteta watches this game again and tells the team they are not allowed to ever play like they did for 60 minutes. The performance was terrible, flat, boring, weak, and total bollocks. We have no right to play with so much fear against weaker teams. Full credit to Arteta for changing things, brining on Auba and Berellin helped a lot. We should play every game with the intensity we should in the last 30 minutes, not the first 60 minutes.

The main issue is he’s playing limited players when he doesn’t need to be. Surely Nelson, an actual winger, would be a better option on the wing that Nketiah?

They’re not limited players, especially against that level of opposition, more so they’re being instructed to play in a limited way.

Scott I can now fully appreciate your work now I’m looking at it for the first time on my 27″ computer rather than I normally do on my 4.5″ mobile.

Genuinely curious, how do you dismantle a parked bus though? Even pep and his billion dollar team has had to resort to bombarding teams with crosses and hoping for the best.

Can we deliberately give opponents corners to draw them out?

I remember wenger saying something about that, giving the opposition more of the ball to then counter and open them up vs teams that park the bus.

The goalkeeping problem hasn’t been solved yet at arsenal

Diminutive size, poor handling and lacking composure on his feet

I have accused him of a number of things. All valid bar one.

All valid bar one. And his diminutive stature is as much a product of his inability to command a penalty box as much as his height

The goalkeeping problem still hasn’t been solved at arsenal

Last season Leno individually saved us as many points as Aubameyang won. There’s an argument for him being our best player over its course, and he was certainly one of our most dependable (up until his injury, which was of course not his fault and was for far less than half the season). I would have been happy to have Martinez as number 1, who’s better at catching the ball, but Leno is a far better sweeper – which saved us twice last weekend – and on balance better with his feet. It’s one of the things he’s been known… Read more »

I’m sick of hearing how many points he saved us. Maybe if he could command his area, hold the ball (or parry it well wide) and brought calm to the defence like Emi then he wouldn’t face so many shots.

The whole defence looks so much more nervous with him between the sticks. Every time the ball comes in there’s a palatable fear as you know he can’t properly deal with crosses either.

Martinez is a world class keeper and we really messed up letting him go.

Not to say he’s a bad keeper. He’s not. He’s good, he’s just not world class.

He wanted to go, get your facts right. Sick of hearing the comparisons as it’s a moot point if the player wanted to go.

The ridiculous notion that we can just sell players as and when we want to has no basis either. How many unwanted players have we shifted in the last few years – pretty much none.

Someone please hire a copy editor for this guy!