THE LOWDOWN
Arsenal welcome Chelsea to Meadow Park on Sunday for a crunch game at the top of the FAWSL. Chelsea would leapfrog the Gunners with a victory and after six consecutive defeats to Emma Hayes’ side and a disappointing defeat at Manchester United last weekend, Arsenal will be desperate to put the record straight with a win.

When I spoke to Joe Montemurro on Thursday, he admitted that Arsenal have a psychological block to overcome against their visitors. With two defeats to Manchester City, three to Chelsea, one to Manchester United and one against Paris Saint Germain, Arsenal know big questions will be asked if they fall to another defeat on Sunday.

New: ‘You guys must be bored of me already!’ Vivianne Miedema interview https://t.co/8QxZOlHnzY #arsenal #afc pic.twitter.com/Gp46otjL8C

Arsenal will again have to negotiate absences to key players through injury again but do at least have Jill Roord and Kim Little back. Arsenal haven’t beaten Chelsea at home in their last six attempts, their last victory against the Blues came in the Conti Cup in July 2014 when Kelly Smith scored twice, once direct from a corner.

The team know that a win is not only significant for their WSL title hopes but also for their confidence, having been beaten so often by top opposition over the last 18 months or so. They have struggled against Chelsea’s high pressing style and they have to find a way through it. Montemurro experimented with a back three for the final 30 minutes of the London City Lionesses game recently and I wonder if he was road testing it with this match in mind.

TEAM NEWS
Jen Beattie, Jordan Nobbs, Steph Catley, Noelle Maritz and Lisa Evans are all out for this game. Montemurro expects them all to join in with full training during the upcoming international break and to return shortly after, all things being equal.

LAST TIME OUT
Arsenal were beaten 4-1 by Chelsea at Kingsmeadow in the Conti Cup last month and, in this fixture last season, they were beaten by the same score after goals from Beth England, Sam Kerr, Sophie Ingle and Guro Reiten, with Beth Mead responding in the second half. Arsenal’s last win against Chelsea was a 5-0 victory at Kingsmeadow in October 2018.

THE OPPOSITION
Fran Kirby won’t return in time for this game due to a thigh injury picked up on international duty. Drew Spence and Hannah Blundell are out with long-term injuries, other than that, Hayes has a full squad to choose from. “Arsenal are a top team,” Emma Hayes told the Chelsea website. “They score more goals than any other team, their attacking play, their build-up play is exceptional.

'I know for us it will be a huge test because derby games are not normal games.'

“They’ve got players who have won major honours and they’ve proved that they’re always in and about the hunt for trophies every season. I know for us it will be a huge test because derby games are not normal games. They’ll say the same in Manchester, there’s a lot at stake and a lot of unpredictability to the game. Both teams know each other inside and out and I have huge respect for Arsenal.”

PLAYER TO WATCH
Emma Hayes has rotated the striker position between Sam Kerr and Beth England this season. England got the nod against Everton last weekend and responded with a brace. Both Kerr and England are top quality strikers but they are also completely different in style, England powerfully runs the channels while Kerr, who can pull wide to good effect to find space, is an expert chance sniffer in the area.

Whoever Chelsea select; Leah Williamson will have her work cut out at centre-half as the senior central defensive presence. Jen Beattie has missed the last three matches against Chelsea and has been sorely missed in all of them. Chelsea will also look to block Leah’s passing lanes into midfield, so she might have to dribble out of defence on occasion, which she is more than capable of doing. 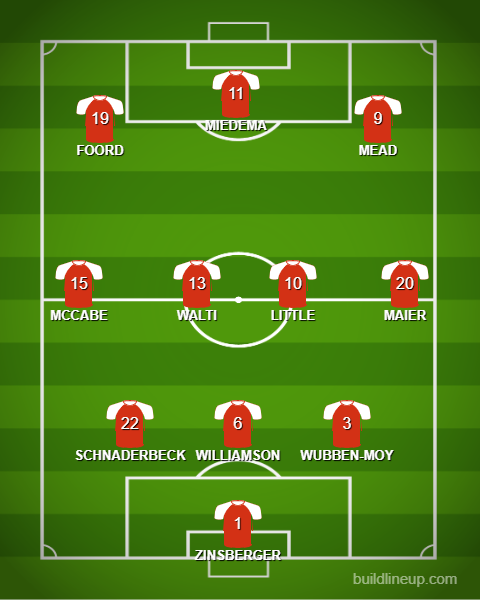 HOW TO CATCH THE GAME
The match kicks off at 2.30pm on Sunday and will be screened live on BT Sport in the UK, NBCSN in the US, Optus in Australia, DAZN in Germany and Italy, ESPN Mexico in Mexico and Central America and NESN in Scandinavia and Finland. Elsewhere, it will be on the FA Player app.

COMING UP
We will have reaction from Joe Montemurro on the site immediately after the game on Sunday. We will also have all of the usual build-up and reaction to the Spurs game in the Conti Cup on Wednesday evening, while we also have an exclusive player interview lined up for you to keep you going during the international break.

I suppose admitting it is a step towards getting over it.

Up the Arsenal! Go girls.

Both Manchester clubs dropping points today should give inspiration. That’s 9 points dropped in 7 games by City now I cannot see them coming back from that.

We have to get over this won’t win because it is Chelsea and we have lots of injuries attitude.

Think you can win and you might surprise yourself. Accept you will lose before kick off and you have probably predicted the result!

Thanks for this, haven’t been able to see much of the women’s team here in the US. Knowing more about the team really makes me look forward to watching tomorrow.

If that’s the line up today, We’ve already lost the game

Such an optimist. Apart from Jill instead of Viki it was the team and we did not lose!