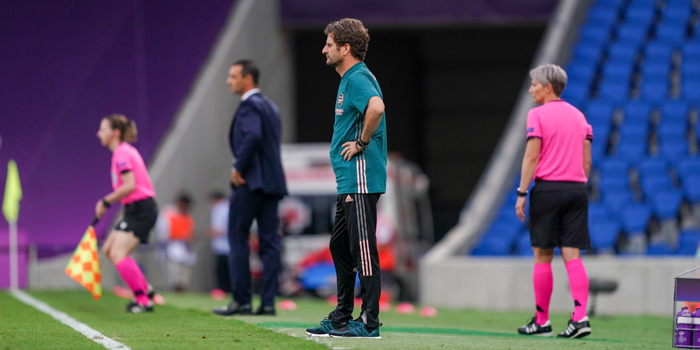 Arsenal manager Joe Montemurro admits that his team will need to overcome a psychological block when they play Chelsea at Meadow Park on Sunday afternoon. Since beating Chelsea 5-0 at Kingsmeadow in October 2018, the Gunners have lost six consecutive matches against Emma Hayes’ side and lost this fixture last season 4-1.

Montemurro’s side come into the game off the back of a disappointing 1-0 defeat at Manchester United on Sunday, a Chelsea win will see them leapfrog their opponents in the WSL table on Sunday evening. I asked Joe whether he and his team have discussed their recent record against the defending WSL champions, “We talk about it, we have to be honest about it. We have to confront the realities. That’s the only way you’re going to learn. We all know, whether you’re at Arsenal or not, that Chelsea have a powerhouse of a team, they’ve recruited some of the best players in the world, and they’ve spent the money to do that. I’m not saying that’s the be all and end all but that obviously gives you an understanding of who you’re playing against and who and what you need to do.

“But there is there is definitely a blockage and I’ve put my hand up sometimes for the tactical approach and we’ve discussed that players who normally step up for us haven’t been at the levels that they should be for these games.” Montemurro will have to contend without Lisa Evans, Jordan Nobbs, Jen Beattie, Steph Catley and Noelle Maritz for this clash and the Arsenal boss suggests injuries have been a nuisance for his team in these matches as well.

“I don’t want this to be an excuse but we have gone into these games without the opportunity to have our full options available. There’s been over the last six games, I think, once we’ve had our full squad available and I think that was the 2-1 loss at Kingsmeadow last year. It’s a balancing act of understanding they are a very, very good squad and there is a blockage, there is something that doesn’t allow us to step up to the plate on these games and there also is a reality. A reality of what we can do with the resources that we’ve got.

“I’ve always said, Yeah, okay, we haven’t had the squad available all year. But it’s provided opportunities for other players and looking at other systems and other ways for us to become a better team and that’s going to be the case again on Sunday. You know, we don’t have players available that you’d probably want for these games, but it’s not an excuse. It’s purely an opportunity for us to see what we can do with the resources that we’ve got.”

Arsenal are used to dominating and overwhelming opponents but Montemurro says he knows his team won’t be able to monopolise the ball to the same extent in this match and that having a better plan when Chelsea have it will be key to breaking their hoodoo, “For us, it’s identifying the moment when we probably have to allow the other team to have the ball a little bit so that we can get some defensive shape. We have been focusing on our ability to identify the moment where we need to probably be a little bit more…I don’t like to use the word pragmatic…a little bit more in control of the situation where the other team has the ball.

Would be great to end the hoodoo! COYG

The small squad was the real problem, and Joe never saw it as a problem

Its the Arsenal
Reply to  Just_arsenal

Thought it must be the players’ psychological block and nothing to do with Joe’s tactics! Perhaps he could try keeping quiet for this game and allow a team of highly proficient professionals work out what they need to do for themselves, after all he has six unsuccessful goes at Chelsea playing his way so it cannot be any worse! The main thing is to match up to Chelsea’s physicality. They like to bully the opposition but they really do not like it when the opposition do it back so if we can get a few crunching tackles in early doors… Read more »

Tbf, he does say explicitly that his tactics are culpable too.

He does but only “sometimes”! 🙂

I don’t think where is anything Joe can say about this Chelsea record that chances anything. We are all past caring about words at this point. All he can do is to win a football match. 😉

That’s the thing, I can’t picture many of our players making crunching tackles other than Kim Little. If we can’t match them physically we need to control the game with our possession and passing.

Did you not see Lotte’s bookable challenge vs ManU? No need for imagination on that one! Have you not watched us play Chelsea lately? We try and hold possession but they immediately swarm around the ball and block potential passes. The ball carrier gets cornered and we lose possession. The teams that do well against Chelsea try and play them at their own game as we did in the Conti Cup Final. We really rattled them that day and even Emma Hayes had to admit we deserved to win and we would have done if their goalie had not had… Read more »

But Arsenal are better than Chelsea, Arsenal just need to have more confidence and pretend it’s not Chelsea they’re playing against. Arsenal can’t really beat Chelsea at their own game, they are the masters, but Arsenals are masters of their own game, they just need to show it against the big teams. I love Montemurro but sometimes he tries to be too clever, just let them play.

Lotte’s challenge wasn’t enough to draw against Man Utd, so not sure that kind of tactic will work against Chelsea either.

I think that the truth is somewhere inbetween. We have to be more physical against Chelsea to be able to compete, but we have to play to our strenghts to be able to win. But problem is that we are missing half of our starting lineup, so we probably won’t be able to do either. We couldn’t even play through United, who although have improved, are nowhere near the Chelsea level. And we are missing players that are needed for either gameplan. To play through Chelsea we are missing Beats and Jordan, because neither Viki (who is probably also injured… Read more »

We have two options then. We get the results of Joe’s investigation into why half the squad are injured at any one time and stop it happening, or, we can increase the number of quality players on our books so that every position on the field has an equivalent level of player to take over in case of injury. But we already know that Joe will not consider the latter so we’re only left with the first option.

Dare I say there is another option, Joe is moved on! By his own admition he doesn’t know how to beat Chelsea, so lets get a manager who can instill some confidence into the players regarding the top three teams. I’m not saying we beat them all every time but at least field a team willing to give it a go, something that is clearly missing at the moment.