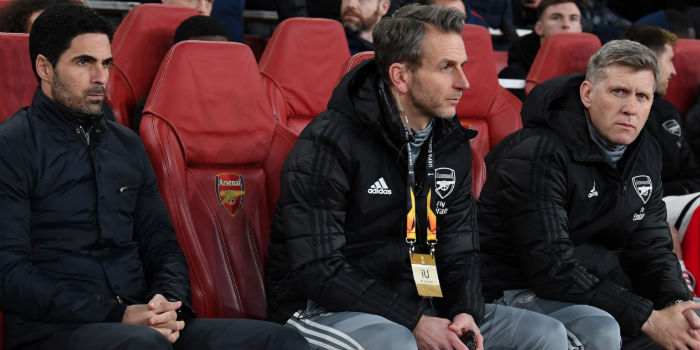 Mikel Arteta says he’s pleased with the support he’s getting from his coaching staff and the way they’ve built relationships with each other.

When the Spaniard was appointed Arsenal’s head coach in December last year he didn’t have much time to assemble a backroom team.

In came Steve Round, Albert Stuivenberg and Inaki Cana to bolster a team that already included Shad Forsythe’s fitness guys, Freddie Ljungberg and Sal Bibbo. Since the summer, the latter two have moved on to be replaced by Andreas Georgson, Carlos Cuesta and Miguel Molina.

As a collective, they are an intriguing mix of youth and experience – Cuesta and Molina are still in their 20s while Round and Stuivenberg have already hit 50 – and they’ve kept a very low profile.

We’ve not heard a peep from any of them via official channels since they joined the club and we’re not entirely sure how responsibilities are divvied up between them.

It’s also rare that the boss is asked about them. On Friday, he was.

Quizzed in his pre-Leeds press conference about the qualities of a good assistant, a role he had at Manchester City under Pep Guardiola, he said: “First to identify what you need around you, what your strengths and weaknesses are or things you don’t control, things you’ve not experienced, things you need.”

He went on to talk about the group he’s brought together over the last 11 months.

“I’m extremely lucky to have the coaching staff that I have,” he reflected. “It was a very challenging thing to do in a very short period of time. We hadn’t worked together.

“I needed a mix of people that I knew really well on a personal and professional level.

“I have to say that I’m really, really happy with them. Not only what they bring and how they help me but most importantly how they get on together. Sometimes it’s not an easy thing to do when you spend so many hours together.

“Also [to build] the relationships that they’ve built with the players, the members of staff, everybody at the club here.”

He wanted his choices which is fair enough. I never believed that Freddie, for example, just happened to leave for no particular reason – and certainly not for another job – at the time. That said, with the problems we have currently the “new” backroom team certainly have their work cut out.

Freddie’s initial role was to watch the game from the stand to see things differently than the bench. Well, I am not sure that was what Freddie was dreaming about.

We need to win games if they are good assistants. They should be helping Arteta make the right decisions.

Is it likely that some players do not like being instructed by the 20-something coaches?

If that’s the case they need to get in the bin!

I thought exactly the same way. A guy in the twenties, wasn’t a top player, hasn’t accumulated lot of experience, just knew Arteta somewhere tells Auba or Xhaka what to do?

It would be nice if this new set piece bloke could actually start to make a difference. You know, like teaching hugely well paid players to do really tough things like hit a corner such that it doesn’t go at knee height to the near post. Or maybe really get the bit between his teeth and teach Bellerin to take a fucking throw in properly.
This bloke has made eff all difference so far. Might as well have gunnersaurus instructing our set pieces.

We are the only team in the league who haven’t conceded from set piece till now. Maybe here also first the most important weakness of last season was fixed since these “well paid” players are expected of taking a corner and throw-in correctly during a live game.

His coaching team are rubbish. We can’t hit a corner and every set piece is wasted. Forget about that, we can’t even have a good throw in.
He is a rookie and doing rookie mistakes. It is unfair to expect him to win the league. Best solution if he leaves the club and we get an experienced winner like Allegri.

Jog on Ham. We actually scored many set piece goals this season. Our problem is not being able to score much from open play yet.

I never actually considered this until someone mentioned it in the comments. What’s changed from last season? Different coaches is one for sure. I wonder if that’s had an effect?

A penalty is not a set piece. Are you watching the Leeds match?