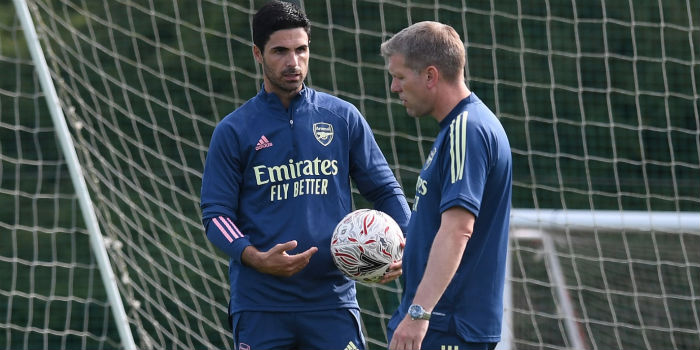 The trio arrives from Brentford, Juventus and Atletico Madrid respectively and will assist Steve Round and Albert Stuivenberg on day-to-day matters.

We learnt last week that Georgson’s role at Griffin Park paid special attention to set pieces, an area that the Gunners are desperate to improve upon both offensively and defensively. No doubt we’ll learn more about the others in due course.

The Gunners have also confirmed that Jordan Reece will take over as head physio after Chris Morgan returned to Liverpool. There had been links with PSG’s Brazilian physio Bruno Mazziotti but they appear to have come to nothing, for now.

Reece was promoted from head of academy physiotherapy to first team physiotherapist in 2018 and was a visible presence on the touchline at the tail-end of last season.

Best of luck to the new boys and a big thank you to those departing.

Arteta on set pieces: It’s an aspect of the game we have to dominate

This sounds very positive, coaches from two of the best clubs in Europe and one from one of the more progressive ones in England. I’m glad he (Mikel) is assembling a team around him.

Hope so. The direction seems to have been largely the other way so anything that helps bring on our own youngsters and attract some quality ones to the club can’t be bad – as long as they’re give a fair chance once here.

Tuff crowd to get a down tick on that one:)

More excited about this than Willian tbh

I know I’m an idiot but I was low-key hoping for a DB10 return, I guess a couple coaches from 2 elite European sides will have to do.

A man that knows what he is.

Not sure about Star Wars, but maybe in The Lord of the Rings? don’t know how he ended up as a coach in the Arsenal tho

He was probably at a bit of a loose end, after destroying the One Ring in the fiery pits of Mount Doom?

Peter Hill Would
Reply to  Dave

Didn’t he have to leave because he was continually caught smoking in the showers? Nasty little hobbit.

Looks like there was a clear out earlier then (Freddie etc.). It’s unlikely Arteta would be able to bring in three people so quickly unless there had been quite a lot of preparatory discussions/negotiations. It will be interesting to see what the new backroom team can do.

New free kick routine. Kolasinac, Elneny, and Luiz form a line behind the ball about 15 yds back. They complete exactly one round of leapfrog with Luiz arriving at the ball last but who will then feign injury and crash to the floor. But no! As he’s falling he dinks the ball up to auba who unleashed a 30 yard overhead kick past a dumbfounded keeper. 1 nil to the arsenal! Thanks Georgson the genius!

Big coaching team, very much like the one Guardiola has put together at City. Best of luck to them all + gotta love the energy and desire Arteta is showing to take control of the entire setup. Always thought we need a manager type, as opposed to headcoach.

Isn’t Molina the mythical conditioning coach from Atletico? The guy responsible for reforming players into the pressing beasts they had to be to play under Simeone?

That’s Oscar Ortega, but I’d imagine this signals a move in that direction

No problem with fresh coaching Ng but what is happening with Auba? He was about to sign back on August 6th. Bet we get into final year with no sale and no deal so he leaves on a free!