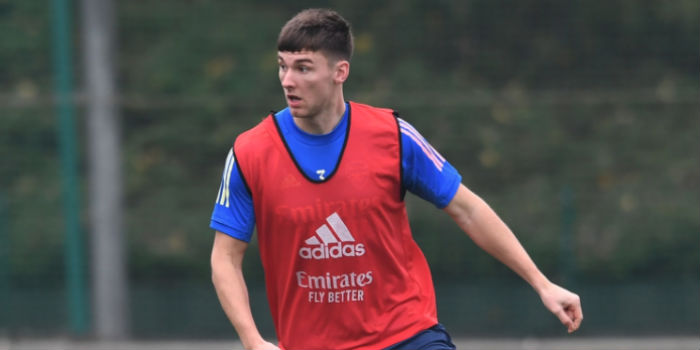 It’s coming up to a month since Kieran Tierney last featured for Arsenal and the Scot continues to be hampered by injury problems.

Yesterday, the Gunners medical team said the left-back was responding well to treatment on a persistent strain to his right lower leg, however, today, Mikel Arteta has revealed the player is also being hampered by a knee problem.

Tierney isn’t taking part in full training sessions at the moment and is definitely out of this weekend’s match against Leeds. Being realistic, with four games in the next 11 days including a double-header with Benfica in the Europa League and a visit from Manchester City, there’s a high chance he could miss a significant chunk of February’s schedule.

“We have to see how the knee reacts when he starts to get a little bit more load,” said Arteta on Friday morning.

“He hasn’t done much yet. He’s very positive at the moment, he’s in great spirits. He’s desperate to get back on the team and we’ll see in the next few days.

“The moment he starts to train a little bit more with the team we’ll see how that knee is feeling and reacts to the load.”

Arteta went on to bemoan the fact that injuries have hampered his ability to regularly field his best team.

“To be fair, I’m getting used to it because we’re missing so many players all the time.

“I don’t remember the last time we were able to play the same starting XI two times [in a row], three I can’t even think about it. It is what it is.

“The players are making huge efforts, even the ones that are injured are willing to come back to play and this is what we demand from them. The ones that are on the pitch, they have to give their best and make it difficult for the ones who want to get back in and that’s what we’re trying to do.”

Tierney: We never do it the easy way

It’s a good job Tierney’s knee problem has happened this year, rather than when we are in a title race

There’s never a good time to get injured. This is a real human being we’re reading about not some pawn on a video game!

Ah, you play World of Pawncraft too?

Indeed. The injuries have really fucked us.

Ha Ha that’s cheered me up.

Partey and Tierney out for a while, not good at all given they are two of our very best players. We could have done with them against Benfica, given how we have performed without them.

Not looking forward to the next few games, though hope I’m wrong.

Yeah, there’s an argument that they are actually our two key players just on the basis of how much we lose when they don’t play. They are also the two players in our squad that we have absolutely no replacement for.

Oh, Arsenal. I do love you. But you’re silly. Plain silly.

Unfortunately, Tierney is injury-prone – he was at Celtic and he is with us so I think we’ll have to accept that he is unlikely to be fit other than in fairly short periods. Partey has a much better history of injuries prior to joining us but as we know it’s been pretty bad overall since then. Hopefully, it may be a case of new league, different intensity etc. and he’ll acclimatise for next season and the injuries will then reduce. All that said, we’re looking at two clearly influential players, who cost around £80 million between them, spending more… Read more »

or letting him in snow might have being the problem.

The self healing snowball method has been used in the SPL for years and is scientifically proven to grow you one extra testicle which then absorbes all inflammation from other areas of the body. Only ballsy types respond well to this treatment however.

Especially when you consider that we loaned out AMN, not bringing in a left-back was really stupid. It should not have been that difficult to snap up a loanee from somewhere.

We should have brought in a striker too. No goals from Auba means no goals for the team.

To be honest AMN doesn’t want to play full back – right or left and Cedric (despite his costly.mistake on Saturday) has been a far better stand in at LB than AMN. I’d even say Saka is a better deputy at LB than AMN. The lad wants to be played in midfield and he has shown little or nothing that suggests he would be started before GX, TP, El Neny or Ceballos. So it is right he goes to somewhere where he will be played in CM and we can see him play games there and see how he does.… Read more »

Getting injured just by playing normally is concerning for Tierney. Maybe we just have to accept he plays 2 or 3 matches and then gets a break.

Maybe, but this simply isn’t your normal season is it, just check out some of the results.

Every team has a squad of players and management under a unique physical and emotional stress, so don’t rush to judge.

It just seems to be more than the average player is suffering in fatigue, so we have to be realistic.

He’s got the pedal to the floor every single game. That’s his normal. It’s more output than the rest of the team. It’s bound to increase the chance of injury, moreso with this years congested schedule. He probably should be rested a little more though. I know we need him and Partey in the team, but it seems rushing them back into the starting XI is not the answer.

Let’s all hope he recovers quickly, but it’s hardly a surprise. He’s obviously injury-prone (and was so at Celtic which we must/should have known prior to signing him). Fingers crossed that we can get at least some more games out of him this season. That said, I fear that we may have a “Wilshere MkII” on our hands with Tierney. I really hope not, but on the evidence so far he’s certainly looking “fragile”.

Declare everyone injured! Fucking shut down this club! What’s wrong with us!

Need a decent left back come summer. Someone that doesn’t mind rotating with Kieran Tierney. Poor chap must hv carried the club for way too long this season tt his knee needs a break for now.