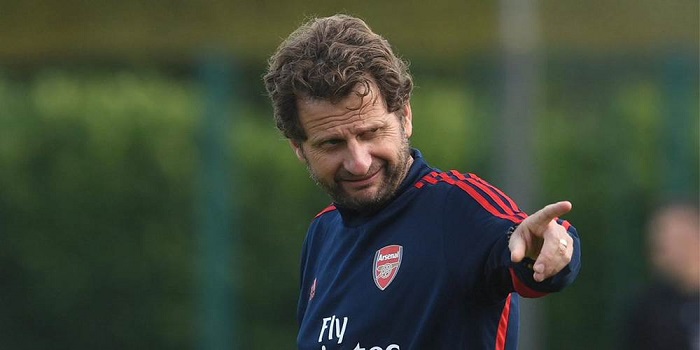 Arsenal boss Joe Montemurro says that he took the decision to leave the club at the end of the season some time last month but that the players were only informed of the decision on Wednesday morning in training. The 51-year old said that he “felt like the time was right to step away” during an emotional press conference on Wednesday afternoon.

The Australian joined the club in November 2017 and won the 2018 Conti Cup and the club’s first WSL title in seven years in 2018-19. This has been a trickier season for the Gunners, who are well behind Manchester City and Chelsea in the league despite having a super talented squad. Asked by Arseblog News when he took the decision to leave at the end of the season, Montemurro replied, “The decision was made in February, when we returned for this season, to be honest, there were some things I probably needed to resolve and look at. The decision happened in February and we decided that this was the best time to announce it. I told them (the players) myself today, just after training, with Vinai and Clare Wheatley. We felt it was important to tell them before anything came out.”

I also asked Joe what he will feel most proud of when he looks back on his time at the club, to which he answered, “I’m proud to have been given the opportunity to work at this great club and wear this great badge and represent it. I hope I represented it in the correct way with respect, humility and integrity. I went to work every day wanting to make things a bit better, to make little changes so that whenever it was that I chose to leave or I was told to leave that the place would be in a better state.

“I think we’ve achieved that and we’ve achieved a very good platform for the next era. As difficult as this decision was, I am proud of the fact that, together, we made some very good gains to get the club to a good level that someone else can take the baton and run with it and get the club to where it needs to be and where this club deserves. We wanted to get the process (of appointing a successor) going so the club has time to get a new person in, it also gives us a chance to tie some things off before the end of the season instead of doing it after the season is over.”

When asked how the players reacted to the announcement, Joe joked, “I think they’re about to have a party!” Montemurro says he will take a break before undertaking his next coaching role, joking, “I need to work on my tan a little bit, I could do with a little bit of sun! I’m gonna take a break, it’s been nine years since I stopped. Yes, you get three to four weeks off in the summer but as a coach you never really stop, you’re recruiting and planning. To be without football for a while is going to be really nice, really strange! It’s something I need to refresh and reboot.”

He admitted that it was a difficult and emotional decision to leave the club he supported as a boy, “You should’ve seen me when I told the players, I was a mess! I was just waffling, it was really, really hard. The biggest thing I was scared of when I told Vinai and Clare was that they would be upset and never let me back into the club! I am forever part of the Arsenal family and I have been one of the lucky ones who got to work here. I looked out at Liam Brady Square earlier [at Hale End] and sometimes I look around here, I look at the Arsenal water bottles and I think ‘is this actually happening? Is this a dream?”

Joe also admitted that being away from his family in Australia had a bearing on his decision, “Yes, it’s been bitsy, my wife was backwards and forwards, my daughter is over here but my son is in Australia so that was part of it. Sometimes you have to make these decisions. But it’s also in the context of where I am as a coach, I have been in a cycle of nine years where I was at Melbourne and we started a team from scratch, then I moved to the men’s side then I came here to Arsenal which was another rebuilding process. It’s been an amazing journey but it just feels like the right time. Arsenal will go to the next level too, they will appoint someone fantastic and go from strength to strength.”

I’m genuinely sad. Yes we have an up and down season, but still he gave us a league title.

Who do you see as the ideal candidate to replace him, Tim?

Would love to bring Laura Harvey back because I think she’s great but I think that’s unlikely. Honestly, I don’t know. Not Jill Ellis, I really don’t think she’s that good, USWNT’s triumphs are more to do with their talent pool imo. I usually think NT managers aren’t a good fit anyway. I am really not sure who Arsenal will go for considering Vinai and Edu have never had to make an appointment on the women’s side before.

Huge respect for and to Joe. I hope he gets a well deserved rest. He should be very proud of what he’s achieved at Arsenal. Wishing him all the best for the future.

Thanks Joe for all these years, and all the best with his future endeavors. Although this season has been disappointing with the deep squad that we have, his contribution of transforming and leading a young squad after Kelly Smith and Alex Scott’s retirement cannot be understated. That 18-19 season was truly amazing and will be remembered

Arsenal haven’t had a deep squad at all, with all the injuries–and I do mean “all.” That’s precisely been the biggest problem. That’s a huge reason why we weren’t more competitive with ManCity and Chelsea. All of the fans who believed that Arsenal should whip those two top teams–with no Little, Martiz, Catley, Beattie and playing 20-year-old Gut (with very little pro experience of any kind) and a rookie in Wubben-Moy–have been a bit naive, especially given the additions those two teams have made. You had Bronze, Mewis and Kelly to ManCity and subtract three+ key injured starters from Arsenal–and… Read more »

I agree LW-M took a couple of games to find her feet back in WSL but she has had several seasons up against the Yanks that you admire so much and in the last couple of games she has been the player of the match scoring a bullet header that won us the Man Utd game so she can hardly be blamed for our offensive ineffectiveness against top quality sides this season.

Thank you very much, head coach!! It is a graceful curtain call👏👏👏

Thank you Joe for some brilliant memories.Such a good humble guy.
I guess you made the decision after the Chelski and Citeh games last month.
Good luck to you and your family
.

I think it’s a good decision; we have gone backwards under him but I am still grateful that he brought some good players in.

Great respect to Joe, he did some great things with Arsenal, and I wish him happiness in whatever comes next. I hope the squad can stay together and we get a quality coach to take the players to the next level.

I was just casually opening Arseblog and did certainly not expect this. I think that is a good way to go out. And the timing is not terrible I think. We had one very good year (18/19) then a crazy second year (COVID) and now we see where we are. I cannot really rate where we stand in comparison to before him, but again for the next manager there are certainly some tools to work with. Some younger ones, some more experienced. It will be really interesting. To regards to an answer from you Tim: I think Vinai will certainly… Read more »

Is this announcement a day early? 🙂
Seriously though I wish the man no ill and hope he can find what he is looking for back home.
I think it is the correct decision for Joe personally and for our team as it was fairly obviously he had taken our squad about as far as he can. We need some new ideas and training regimes now.
Isn’t there a certain experienced Welsh lady still available?

He’s a good man and I do feel sad to say goodbye, but sometimes the time is right to move on. It was in the 18/19 season that I started travelling around to see our team, starting with that amazing (and as yet never to be repeated) very rainy match at Kingsmeadow! Then the championship-clinching win at the Amex, and Emma’s goal in the last match of the season. Great memories, even up there with the 1-0 win at White Hart Lane in 1971.

Thank you Joe and every good wish for the future.

Does anyone really know why he’s leaving?

Made his decision after losses to Chelsea and City in Feb and due to family concerns.

Can’t vouch for this, but somebody on another soccer board mentioned that his mother has been sick in Australia and that was a factor….

As to the replacement, I’ve got an open mind (but thank goodness Phil Neville isn’t available – his twin sister changing sports would have been a better bet!) I’ve liked what I’ve seen and heard of Jayne Ludlow, but agree that the job of a day-to-day team manager is very different from managing a national team. Can we trust the Arsenal hierarchy to make the right choice?

All the best to Joe, his family and his future career prospects. I am happy he has decided to leave on his own terms.

Hopefully, his departure brings with it better tactics; a new philosophy, a stronger mentality and a wider recruitment policy because I believe that’s what the team needs to get back to the top.

Interesting summer ahead.
Aparantly a ‘management review’ of the women’s operation overall is underway, a new head coach will be arriving, and several players’ contracts up for renewal or not as the case may be, we could see quite a churn in personnel and a different looking set up for next season.