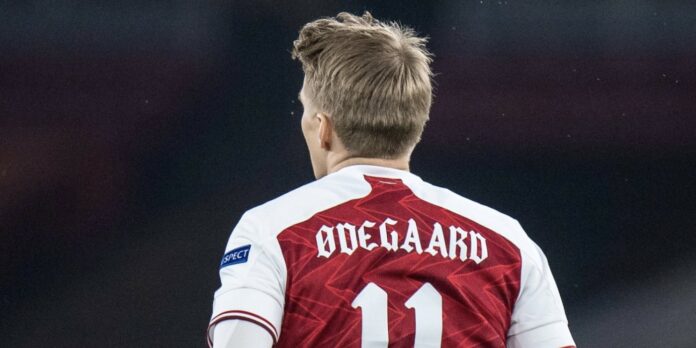 Mikel Arteta suspects Arsenal could be without Martin Odegaard for Sunday’s trip to Sheffield United and next week’s Europa League quarter-final second leg with Slavia Prague.

Despite picking up an ankle injury during the Interlull, the midfielder played the full 90 minutes of last Saturday’s defeat to Liverpool and appears to have exacerbated the problem.

In midweek, the club’s medical team reported that the 22-year-old was experiencing discomfort and he subsequently sat out this evening’s 1-1 draw with Slavia at the Emirates. Worryingly, he may need at least another week to recover.

“We don’t know,” replied the boss when asked about the status of Odegaard’s injury.

“He wasn’t able to play today and he will be out, I think, for the next game or two. But we don’t know yet.”

Turning his attention to matters on the pitch, Arteta lamented the way his players failed to see out the game having taken an 86th-minute lead, courtesy of substitute Nicolas Pepe’s smart finish. Just when it looked like the game was won, Tomas Holes headed home a corner from close range to give Slavia Prague a precious away goal.

Arteta said: “I think we deserved much more than the result that we got having made the most difficult thing, which was to score the first goal, and just wait for the last four or five minutes to manage the game much better than we did.

“We failed to do that and gave them an opportunity with a corner. They scored the goal to put the tie and the match in a much different position. Looking back to what happened on the pitch, it’s not what we expected.”

He added: “I think the players stepped in and gave absolutely everything. It’s a really difficult opponent to play with the amount of duels and man-to-man situations that they create, we managed that really well in certain moments, were much more aggressive today and ambitious to play the game we wanted to play and we created some big chances.

“I totally believe that we can go there and win the match otherwise I wouldn’t be sitting here. The mindset has to be to go there and score goals and to win the game.”

Odegaard positive about Ancelotti relationship but unclear on the future

When it rains, it pours. And it rains a lot at Arsenal.

Usually I try to be an optimistic person but I have this foreboding feeling that perchance we salvage this round and win the away leg, we’ll meet Villarreal in the semis and get walloped.

I woke up this morning and despite the appalling misses last I thought we can win in Prague. They weren’t a particularly good team and one goal and we go through.

Even if we concede we still only need to score one to keep the tie going. After that a 2nd goal and its advantage us. Happy days.

I miss not knowing what the coach was saying

Smith-Rowe + Saka should be rested for Sheffield United

why would you drop gabriel for holding when holding is at fault for so many of our goals, gabriel needs experience with him he’s only 22, whereas holding has been playing here for what seems like a decade and hasn’t improved at all. furthermore you put willian in your team? he’s one of if not the worst player ive seen put on a arsenal shirt

If holding was Italian you’d be creaming you pants over him. Holdini had a good game last night some good forward passes. Overall he’s been one of our best players this season.

He’s been the reason on more than a few occasions why the other team scores. He’s missed several headers, allowing smaller players, Sterling for one comes to mind, to get higher than him. I like Holding but he’s not been at his best this season. His level is squad player for us. His strength as a defender had been aerial interceptions and defending in the box, but he’s been making too many mistakes this season.

I would play Nelson, Balogun, Nketoah and other youngsters. No point playing Laca or Willian or Ceballos.

Watch us be the team that gives Sheffield the rare win

I don’t think even Nketiah would do worse than Laca now.

More poor management. Played him for 90 mins and made his ankle worse.

Emery isn’t young and he’s been in the business for more than a decade.

So the managers decision-making worsened one of our best players injury again??!! Its getting ridicilous now.

The only way one can blame Arteta for playing him is if he knew that Odegaard was carrying an injury that might get worse. It’s the medical team plus the player’s feedback that managers depend on in this case. I doubt Arteta chose to force Odegaard to play.

You have no authority here T.A, read the comments and understand them.

Well I got it Bleeding Gums. Even if those other two didn’t.

No confidence in this team or the manager, Odegaard must be thanking Loki that he’s only here on loan.

If he doesn’t want to play for Arsenal, there is always the Madrid bench waiting. It never works out well unless a player is motivated to represent the club.

He would fit right in with the other ArseHoles. (Geddit?)

We have other Holes to fill.

What can you say…? Players and manager deserve criticism but players deserve more. The chances we missed…hard to take us seriously really. Gutted. Really expected courage, commitment, sharpness, clear signs of how much this game meant to the future of the club. Don’t get these players. Auba’s miss and Laca’s miss. One didn’t seem switched on the other couldn’t rise to the moment. Those guys have to give us more. We can win next week, but we can also lose—don’t doubt it. We’re a team with such fleeting mentality. Fucking maddening…truly maddening

Get well soon! Anyway, this is not the big problem for the team because we do not have any important match left this season. So we can try new players etc.

Who cares?
The season is done and dusted thanks to Arteta’s incompetence.
No doubt he will be here next season and the season after that because its easier to sit of your arse and do nothing than it it is to take an interest in a business that is worth £1 billion.
And there is a check on owners to see if they are fit to own a football club?
Hasn’t worked in the case of Kroenke has it?

Wow playing key players in pointless games (we lost the opportunity to work our way up the table a few months ago) and they get injured!!! Then playing some OAPs (Willian et al) in the key match of the season is crazy!!! The line up should have been Leno in goal; Saka leftback; Gabi and holding centre back; hector at right back; partey, xhaka and ESR midfield; Auba, Martinelli and Pepe in attack!!!

Bad news, to go with all the other bad news. We’re not out of the EL yet (and hopefully we won’t be) but apart from the obvious financial hit failure to secure European football next season is unlikely to make Arsenal a more attractive proposition when options for Odegaard are considered in the summer. Should he be put up for sale, you can imagine a conversation – MA: “Stay with us, Martin, and you may have a chance of a run in a domestic cup.” MO: “Is that the time? I’ll have to be going.”.