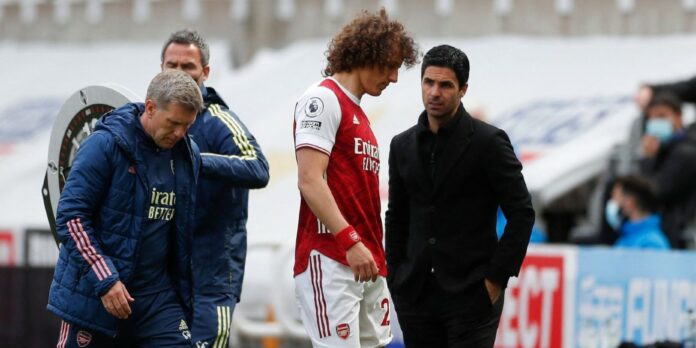 Mikel Arteta has confirmed that David Luiz will leave the club this summer and says he’ll miss the Brazilian after forming a close relationship with the veteran centre-back away in the last 18 months.

Out of contract in June, it was decided that the 34-year-old, who is currently sidelined with a hamstring problem, would not be offered a new deal.

Assessing Luiz’s contribution in the two years since he signed for the Gunners, Arteta said: “He’s a player that has won everything in football and he has every right to do so because of who he is as a player and a person.

“I had the privilege to work with him for 18 months, I really enjoyed it. I think we got on really good, we had some great moments together.

“He’s been really helpful, someone I really like and appreciate so much. I just say thank you to him and wish him luck in his next chapter. I’m sure, knowing David, that he’ll have many more to come, as a player and in the future somehow related to the game.”

He added: “When you get to know the person, his background, where he was raised in Brazil and what he’s done…to get to this point, it’s remarkable.

“You understand a lot of things happened for a reason. Sometimes it’s not just an ability, or quality or determination, it’s many other factors. I’ve learned from him. He’s been very helpful every time with the team.

“I feel sadness as well because you get attached to the players emotionally. One is the player we need to get the maximum from and then there’s the person, when it gets to these stages, it’s tough and it hurts because the relationship now is going to be going away, at least in this space where I won’t see him every day. Again, I have to say thank you to him.”

When news broke of Luiz’s impending departure, his representatives seemed keen to suggest the decision had been his; there were even suggestions the Brazilian was concerned about the culture at the club. Arteta wouldn’t be drawn on the specifics, but he did make it clear that talks had been ongoing for some time.

“We had very clear talks in the last few months,” said Arteta. “We had a big decision to make last year when we had to extend his contract in a very difficult moment with the Covid world and the pay cuts.

“We managed to extend it for one more season. He’s given his best, I tried to help him as much as I possibly could, the club as well, but after some conversations, we decided this was the best way to do it now.

He added: “It’s after a few conversations that we had, David and I. We discussed the situation on different occasions and the other day we made the final decision on it.”

It’s the right decision for everyone, so good luck to him.

Yup. I was surprised how obviously the absence of Luiz and Xhaka affected our range of passing.

Thank you for the memory David, the man who can frustrate and excite in equal proportions.

tbh , he was our best defender and maybe amongst our top 4 players of the season.

95% of the time that statement was true, sadly the other 5% of the time he was our worst player and cost us points. Without the brain farts he’s one of the best defenders in European football. I think he’ll have a good career in coaching and best of luck to him, seems like a good personality for it.

Salibaba and the Forty Thieves
Reply to  Daveo

That’s sugarcoating things and the facts don’t lie. In this time here. Luiz received 3 red cards and conceded 6 penalties (1 which was arguably dubious) in 53 league matches. That’s 9 serious offences for a rough percentage of 17%. I also believe part of the reason why he was heralded as our best passing CB is because he played the game at his own pace not the rest of the team’s. There were several instances where a quick breakaway was an option but Luiz would slow down and wait instead to make the “movie-star” pass. I’m really surprised by… Read more »

When he’s great he’s great, when not he’s a calamity. Post match interviews will be less funny without him.

All the best, David. Hope you get your last season with Benfica that you want.

He has been more good than bad for us. In a team that has struggled he has shown leadership, and those long passes have been important to get us going forward. But time is up, his injuries and age are catching up and we need to get the youngsters getting that experience now.
So thank you David, that FA Cup win was sweet!

If we don’t sign a right sided CB this summer we are putting a huge amount of pressure on Saliba to perform. Although I respect Rob Holding I don’t think he’s good enough to be our first choice RCB and if we’re going to really challenge for the top 4/6 he shouldn’t be starting for us next season.

Arsenal have third-fewest GA in the PL this season. Rob Holding has played the most minutes of any defender. I’ll stick with Holding and his lunch-pail work ethic, thank you.

It speaks well about overall defensive play and is a great stat to build the team on. Despite the absence of Tierney and almost non existent proper RB, the team has done well in defending. More of this please next season and start to build more balance between defense and attack, should see us in great shape next season. Please keep first choice CB partnership, too much experiment this season.

Not questioning Holdings leadership or work ethic at all, but I agree with the OP. He’s solid, but he lacks pace and a decisiveness that top CBs have. I think we need an upgrade on him at some point, and a world class CB is never a bad thing. Clearly we’re not going to sign one this summer, but I think the 25 odd mill we splashed on an 18yo Saliba suggests there were at least a few people who thought he could develop into one, and as we’ve seen with Fofana that’s entirely possible. Arteta has had issues giving… Read more »

It seems the perfect combination of CBs to me. Holding/Chambers/Saliba on the right – enough experience now and a talent that needs to be unleashed. Gabriel/Mari on the left. Gabriel could be one of the best in the EPL and Mari is a solid option to push him. We don’t need CBs this summer. Fullbacks, midfield (AM and CM), and probably a striker.

I’d like us to get two fullbacks, Max Aarons to replace Hector and maybe a Ryan Bertrand as backup for Tierney…(just don’t tell him he’s coming in as a backup) I think we are well stocked in CB with Saliba and Mavropanos coming back to join the four minus Luiz. In midfield, I’d like us to go all out and permanently sign MA from Real Madrid and get Buendia from Norwich who slightly reminds me of Santi and then Bissouma or someone who’s a mixture of Xhaka who can pass and the Flamini who came on for his second debut… Read more »

As long as not too many crosses come in for shorter forwards. That seems to be his achilles heal. Sterling”cough”

Defenders get beat. Fact of life. Rob doesn’t get beat often. Rarely seen him be embarrassed. Most clubs would snap him up in a heartbeat.

More and more people don’t care about facts. I am a big RH fan but it seems I am in the minority. He hasn’t had any huge mistakes that have led to a goal that every defender around him has this season. He isn’t VVD, but he’s youngish for a defender and can still get better