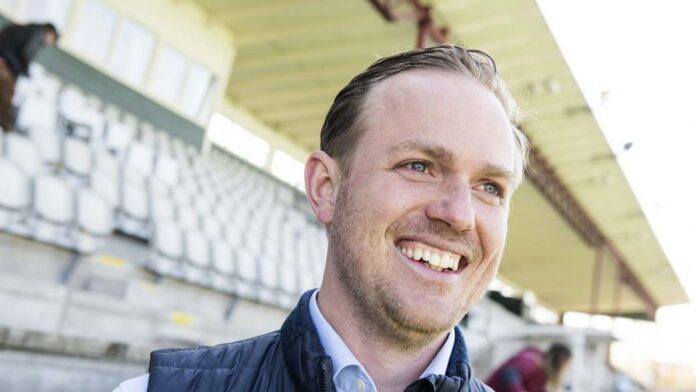 Arsenal today announced the appointment of 38-year old Swedish coach Jonas Eidevall as the new Head Coach of the women’s team. Jonas sat down with the press this afternoon and Arseblog News had the opportunity to spend a few minutes in his company. Here is a full transcript of our conversation.

Arseblog News: In your piece on Arsenal.com from earlier today you referred to Arsenal struggling in games where the likes of Chelsea and Manchester City adopted a high pressing approach. How do you plan to address that issue? Do you see it as a tactical, technical, mental or positioning issue?

My job is to train the players so they know where to look and that they have the base to take the decisions and that starts with the positioning. If the players don’t know where they are supposed to be positioned it is hard to know where to look and those moments, when you are under pressure in your own half are the most stressful moments because you know if you give the ball away, there’s a high chance you will concede a goal.

So mistakes in this situation matter and you don’t want that for the team so it’s very important for the players to know where their teammates are going to be and so I need to get them focused on that.

AN: Will you be making any changes to the coaching staff?

Jonas: I will keep all of the current coaching staff, we are adding some other staff but not in the football side, that’s more on the medical and sports science side. I think I can benefit and the team can benefit from keeping that knowhow from Leanne (Hall) and Aaron (D’Antino) and Jonathan (Dixon) and Ed the analysts and the goalkeeping coach Sebastien Barton. It will be much easier for me to get into work in that environment and then we can see if we need to add something in the future, I don’t know yet but I am very excited to start working with them.

Jonas: I am still coaching Rosengard, I am under contract with them until 12th July and we have two more games before that, so obviously that is taking up a lot of my time at the moment. To be honest I don’t have much of a life except for my family and my job- so that always takes up a lot of my time to think about the different players around the world and how they can fit into my playing style.

I spoke to the Arsenal players this morning and that was brilliant and I got to talk to them quickly about what we have ahead of us and what will be important in the beginning. It was important to open the lines of communication, even if I am under contract until 12th July we all understand now this will be a bit of a dual role for me. But we need to keep things moving at Arsenal to make sure our pre-season is planned really well and we have a good start because time will be a limited resource to us. We need to be very effective in how we use our time.

AN: Have you spoken to current Rosengard players Jess Samuelsson and Katrine Veje about Arsenal, both of whom are recent ex-players?

Jonas: Not as such, I only told the Rosengard players this morning about the job. But I spoke to them a lot when they joined Rosengard from Arsenal about their experience. I always do that with players who have been abroad because I want to see if there are things we can pick up or learn from or we can prepare- a lot of the players at Rosengard have the ambition to go and play for the biggest European clubs. I have always been interested in the gaps and the differences between their environment and ours in Sweden.

You all are doing the Lord’s work!
My favourite Arsenal blog by light years.

I’m excited and optimistic. I also liked how he spoke about depth in the squad. Hopefully Keets is announced along with some other good names.

Keats and one other I’m told about which I think will become apparent pretty soon.

Please who is Keats

I think it is Nikita Parris, having read the next article.

Gotta love Tim for starting up with new manager with game tactics question. So there is hope that with Jonas we can continue with detail analysis. As frustating as Joe’s answers there in the end, it gave more detailed insight than anywhere else written about womens game.

My personal favourite thing from Jonas interviews yesterday was the bit about needing Arsenal to be pressing team. That was my persnal biggest annoyance about Joe in last 2 years. So I am hopeful.

The feature column on the Arsenal website (Jonas Eidevall | In My Own Words) is an awesome read and will get you exited. Pressure and Pressing !!!!

“My philosophy is simple: there’s only one ball and it’s our ball. We want to have it.” – source http://www.arsenal.com

I cannot but feel a sense of real optimism about this guy. If he has half the impact that Joe had in his first 18 months it should be high value entertainment down Meadow Park way….and occasionally at the Emirates!