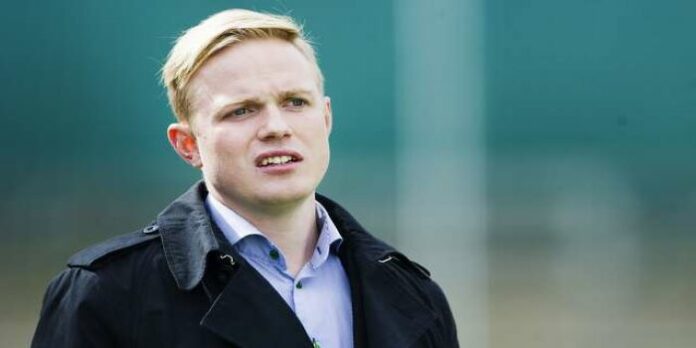 Jonas Eidevall has been confirmed as the new Head Coach of Arsenal Women. The 38-year old joins from Rosengard in Sweden where he won back-to-back Damallsvenskan titles in 2013 and 2014 as assistant coach and then Head Coach.

Jonas told Arsenal.com: “I feel honoured to be taking this role. Arsenal have a rich history, more successful than any other women’s team in England. I want to add to these honours. It’s super important that we win, and we will be very ambitious about that, but it’s even more important that we live the values and defend the club badge on a day-to-day basis. I cannot wait to do that at Arsenal.”

Our chief executive, Vinai Venkatesham, added: “Jonas was the standout candidate of everybody that we considered for this role and we think he’s going to be a great fit to be the head coach of Arsenal Women. It was important that we found the right person to represent our club, both on the pitch and off the pitch.

“As for his coaching style, he will bring the style of football that Arsenal fans want to see. He’s someone who likes to play on the front foot, high-tempo, attractive, attacking football. The thing that really came out in all of our interactions with Jonas is how much he wanted to join Arsenal and his desire to be part of this club, his desire to be part of our future and to help us deliver our ambitions going forward. So we’re delighted that he’s joining us.”

We’ll have a podcast on the new coach over the next few days and I am expecting there will be a press conference, which we will cover too.

Welcome to the Arsenal, Jonas, all the best!

Anyone else got a certain weezer tune in mind for his initiation song?

What is your opinion on him, Tim?

A Different George
Reply to  thankyou22

Like many Arsenal supporters, my personal knowledge is unfortunately pretty limited, so I rely quite a bit on Tim’s critical judgment and understanding. Is this a safe, unimaginative choice, or is this the right direction?

This to whom may concern
“Arsenal have a rich history, more successful than any other women’s team in England. I want to add to these honours”
this lawyer football coach setting the record straight.

Welcome to Arsenal, finally we have a coach. (starts googling old Rosengard matches) Let’s hope he brings Bennison with him.

Fun fact, Zlatan is from Rosengård.

How come he hasn’t won any titles since 2013/14? I don’t know much about the Swedish league to know if he has been over or under performing?

Eidevall has had two spells with the women’s side Rosengård, sandwiching time as Henrik Larsson’s assistant at the men’s team Helsingborg. In his first stint with Rosengård he won back-to-back titles in 2013 and 2014; on his return he won the Swedish Cup and then, in 2019, their first title in four years.

Interesting appointment, like most of us I know nothing about him as a coach but a quick bit of googling suggests he’s an intelligent analytical thinker who seems keen on developing players too – from Anita Asante’s twitter: “A great coach & mind, who definitely influenced my growth as player during my time at FC Rosengård”, Hanna Bennison (one the most talked about young talents in Europe right now) was also singing his praises in a recent interview.

The swedish takover has begun. Nice. Never heard of him though. Hope he comes good.

Welcome Jonas. I’m with the scribe.
No idea why but this feels right for AWFC.
An intelligent coach with a squad full of intelligent players. Hopefully it will be a good mix.

Another name sp*rs can strike off their managerial short(?)list

A Different George
Reply to  The Beast

Surely he turned them down weeks ago.

The Beast
Reply to  A Different George

Must be difficult to keep track of the rejections at this stage. Sure they’ve got the picture now though.

Welcome to our club manager Jonas👏👏

Can he play CAM?

Why not a female coach?

Perhaps Pia Sundhage was too happy managing in Brazil..?

Yeah that was my first thought as well. Nothing against this fellow but it seems a bit absurd to me how prevalent it is to have men coaching women’s teams.

I’d be fine with it theoretically if the argument was “a coach’s gender is immaterial,” but the fact that we never see women coaching men’s teams gives lie to that proposition.

This looks a really good hire, I think Jonas has the ability to do something good with Arsenal. Although, I do get a little worried when I read Vinai saying “Jonas was the standout candidate of everybody that we considered for this role”. I feel like that line has been rolled out a couple of times in the past few years and it’s become a trigger of anxiety for me.

Anyway, welcome to the club Jonas! I look forward to seeing the team play in the new season.

This stuck out to me as worrisome:
“The thing that really came out in all of our interactions with Jonas is how much he wanted to join Arsenal”

I’m sure it’s a throwaway line but still… Wouldn’t all candidates really, really like the job?

Looking forward to Tim’s thoughts on the hire!

Maybe because he is coming from a 11 game league part time league,

I thought we would hire Olivier Echouafni based on the fact that he led PSG to break the dominance of Lyon in D1F last season, but I’m not sure if he can speak English or not.

Anyway, I hope Jonas’ first season here will be as good as Gareth Taylor’s first season at Man City. Having a world class striker in Viv rather than Ellen White should make his job easier.

Happy to welcome our latest Gunner to the Arsenal.
Wishing you the best of luck, Jonas, you’re gunner need it😉

Hope he settles in in time to replace Arteta when the latter inevitably gets the boot come december and we are 2 points off relelgation zone.