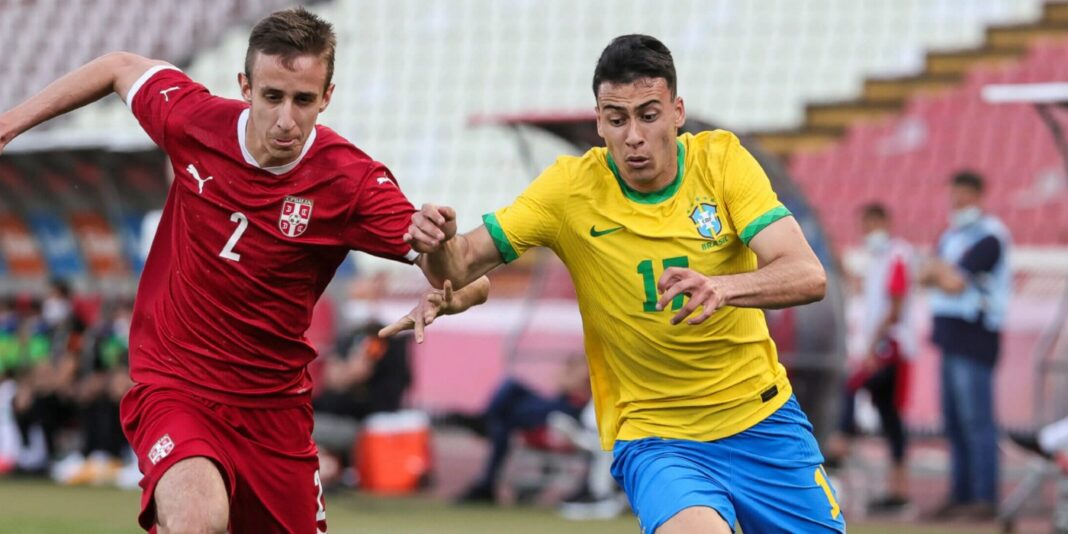 We’re not going to lie, we assumed Gabriel Martinelli was heading to the Tokyo Olympics when he was called up by Brazil’s under-23s in May.

As it turns out, our striker hasn’t made the final cut although, at this point, it’s not clear why.

Gabriel Magalhães in Brazil's squad for the Olympics. No room for Gabriel Martinelli however.

There are a number of possible reasons for his exclusion. He might have picked up an injury, his form in recent friendlies might not have been up to scratch or, as @Stillberto speculates, Mikel Arteta, who will lose Gabriel Magalhaes to the tournament, might have put his foot down and decided Arsenal need the youngster to undergo a full pre-season before an important season.

As this isn’t a FIFA backed tournament, we’re under no obligation to release the player.

As soon as we find out the actual reason for Martinelli’s exclusion we’ll be sure to relay it.

The tournament is due to kick off on 22 July – the day before the Games’ opening ceremony – and will run until 7 August.

I hope he just didn’t make the cut. It’d be really bad if we didn’t let him go, if I were a player being denied to go to the Olympics (even if it’s not football’s biggest occasion), I’d surely be looking to leave the club.

Absolutely. Arteta seems to have a bit of a regimental approach to the squad. The problem is he isn’t an experienced manager that all the players look up to. We’ve seen that with Auba. Martinelli didnt get anywhere near the gametime he should have especially after the Villareal game. Arteta needs to be very careful or Martinelli’s head may be turned if a club comes calling.

“Martinelli didnt get anywhere near the gametime he should have especially after the Villareal game.” I think that’s not really true. He’s a 19-year-old coming off a serious injury. We had Pepe, Saka, Aubemayang, Nketiah, Smith Rowe, Odegaard, and Laca in the squad. At least three of those I would have chosen over Martinelli in most cases. I think he played decent this season when he did, but he didn’t necessarily set the world alight.

It would feel terrible to be so highly regarded and valued by your club.

Yes, if it means getting in the way of playing for your nation….And this is not exactly a friendly fixture, getting an olympic medal doesn’t happen often and is nothing to be scoffed at

Barcelona faced an identical situation with Messi & their rookie manager by the name of Pep convinced Laporte it would be far better to release him for the Olympics than to have an extremely angry player on their hands. This was prior to Messi’s real breakthrough campaign by the way. Surely Arteta will have learned something from his former boss.

Martinelli — the Messi of Arsenal FC!!

Judging by how he treated players inconsistently in his short tenure, I doubt MA knows what he’s doing

We have to “thank” Arteta for this. Denied the boy game time whenever he could.

Indeed. Everything is Arteta’s fault. Wasn’t he the first in the PL to get covid? There you have it.

I really hope it’s not because of injury. A full preseason should do him well and really benefit us. Can see him being very important for us next season if all goes well.

I really hope it’s not because he is crap. I am expecting a big season from him

As long as it isn’t because of an injury I’m happy with that.

I was hoping he would get some much needed game time and experience of a big(ish) tournament.

We need to release this guy down the left next season!

Good. Martinelli can have a nice relaxing summer then come back fresh next season to sit on the bench and watch Willian play in his position.

It takes a well rested man to be able to watch that..

Who’s gonna give the fans a nice relaxing summer to watch Willian though?

On the face of it, Im ok with this. Preseason for him is a necessity for us.
Also due to the Olympic timing, its likely he wouldnt be available for the first 3 or 4 games anyway.

Im glad that hes not going.
But, he still has chances of make it, because a lot of teams dont want to release the players for the olympics.
Theres one striker in the list (Pedro) thats not going

I honestly feel it’s just… because he didn’t make the cut. All of Brazil’s attackers had better seasons than him in this last period. Maybe Pedro will get cut out because Flamengo doesn’t want to let him go and that could open up the spot for Martinelli, but even so I don’t think he’ll make it

Good, that’s what we like. We’ve lost far too many players to other tournaments in the past.

I’m sorry for the player – the Olympics is a big gig for any professional athlete – but it’s high time Arsenal got the rub of the green for a change.

*irony of Olympic allowing only amateur athletes for most of its existence. This actually makes me wonder if there are any lessons to learn from the global commercialization pushed by IOC to capitalize on TV deals and sponsorships, that can be applied to the ESL crisis. Of course there are huge differences, but a unique sporting event and culture was irreparably changed in the pursuit of profits, and though a lot of money is made, most people watch with only the mildest interest – hardly guaranteeing continued relevance.

Well, the tv money certainly screwed Football in England. The old First Division was fine. My happiest days watching Arsenal were on the North Bank at Highbury between 1971 and 1992. Then came along Rupert Murdoch and Sky and Greed. And sanitised the fuck out of a National treasure and set it on a road of corporate global greed and political correctness that has bastardised the beautiful game beyond all recognition – especially for those who used to simply go and stand on a terrace and cheer their local team. When I say The Arsenal are now ‘Arsenal’ in name… Read more »

I hadn’t considered what the absence of Gabriel Magalhaes means for the status of Arsenal’s CB ranks. Maybe this is one reason the Ben White signing has taken greater priority?

The Olympics doesn’t last more than a few weeks, right?

Did Willian make the cut?
(Only half joking)

Unlikely for the U23’s. William is no longer eligible for the U32 squad.

True, but of all the footballers in Brazil, why pick him?

This is sad for him as I’m sure he would’ve loved to go and I hope it’s not injury related. I’m sure the club would’ve allowed him to go if he was picked. He’s still very young though so should definitely be part of the team for Paris in 2024.

I’m sure Arteta veto’ed his participation in order to protect him, as Arteta himself has been doing for a while.

Martinelli getting injured in training has set him back over a year and probably cost Arsenal. His pre- injury form was better than most of our forward line last year.

Here’s hoping he can recapture that confidence and goalscoring touch this season.

Why would he put his foot down for one and not the other?