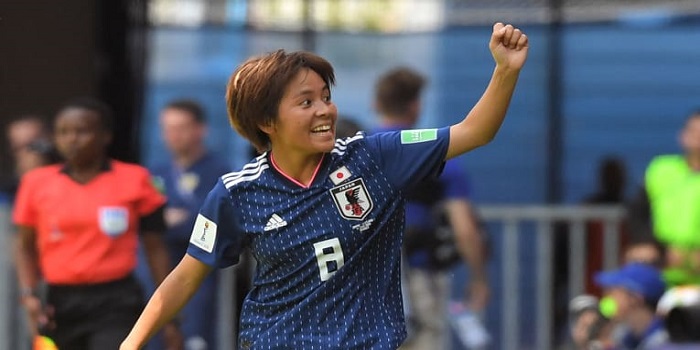 The women’s football tournament got under way at the Olympic Games in Japan today and there was plenty of Arsenal involvement. A full round-up of today’s Arsenal related action.

Team GB 2 – 0 Chile (Sapporo)
Ellen White scored twice in Team GB’s 2-0 win over Chile, with Gunners captain Kim Little playing the full 90 minutes in midfield and producing a stellar performance. Nikita Parris played the final 22 minutes as a substitute and Leah Williamson was an unused sub. Arsenal defender Lotte Wubben-Moy was one of the four players not to make the match day squad.

Japan 1 – 1 Canada (Sapporo)
Mana Iwabuchi scored a late equaliser for hosts Japan against Canada in Saporro. Iwabuchi, who signed for Arsenal from Aston Villa this summer, wore the coveted Japan number 10 shirt and rescued a point for the home side with a sumptuous first-time finish from outside of the penalty area. Japan play Team GB on Saturday.

What a player Mana Iwabuchi will be for Arsenal pic.twitter.com/HYp05Gt88q

Zambia 3 – 10 Netherlands (Rifu)
Vivianne Miedema needed only 60 minutes on the field to help herself to four goals in Netherlands’ opener against Zambia. Miedema had the hat-trick secured inside 30 minutes and left the field (with no injury) shortly after scoring her fourth on 59 minutes. It makes her the top scorer in the tournament after the first round of games and it wouldn’t be surprising to see her finish top of the scoring charts come the tournament’s end. Former Gunner Jill Roord was also on the score sheet in this one.

Australia 2 – 1 New Zealand (Chofu)
Lydia Williams, Steph Catley and Caitlin Foord were all starters for the Matildas as they opened their campaign with a 2-1 win over New Zealand. First half goals from Tameka Yallop and Sam Kerr put them on their way to victory, though New Zealand grabbed a late consolation goal. Catley and Williams played the entire game, Foord was substituted after 88 minutes.

‘I know I need to be in the box more now!’ Vivianne Miedema talks to Arseblog News

Vivianne is already a legend!!

Wish she could play for the men’s team! MVP.

sure! wish in men’s team

Tim is a legend!

Hi Tim, any chance you can underline the names of the Arsenal players? I still trying to get to know the women’s team. Seems like plenty of full international players for Arsenal!

fair shout, have put them in bold 🙂

I watched the Japan — Canada game. Iwabuchi is some player. It’s amazing how the attack of the women’s team is shaping up.

Yeah Viv will get plaudits as she always does but I think Banda should get a shout for an Olympic debutant scoring a hattrick against the Dutch but no one will remember her heroic effort because her team shifted 10!
Still difficult to believe Sari conceded 3 so obviously not enough ex-Gunners in defence for the Oranje!

Defo, she is actually the third most expensive transfer in women’s football history- she is playing in China atm.

That’s interesting. I was thinking Banda looked a 21 year old rough diamond ready to be polished in the WSL into a real goalscoring phenomenon and yet the Chinese have already lumped out a transfer fee for her. Bearing in mind that the Chinese national team don’t appear to be earth shakers I wonder what standard their domestic league is?

The very best players produce their very best performances at the very best tournaments: enter Kim Little at the Olympic Games in Japan. I watched the whole game & she was absolutely the star versus Chile today, with young Lauren Hemp also excelling. If Anna Margaretha Marina Astrid Miedema (to use her full name!) was Team GB’s striker it would have been around 5-0!
And who would have predicted the Swedes to thump the good ole U S of A!

I watched the Netherlands game, was not impressed w van Veenendaal / our defense, got some work to do there if we wanna make it far into this tournament. Super impressed w Barbra Banda!

Anyone watch the French men’s game Vs Mexico, they have a young lad called Michelin- I think he is going to be a star!