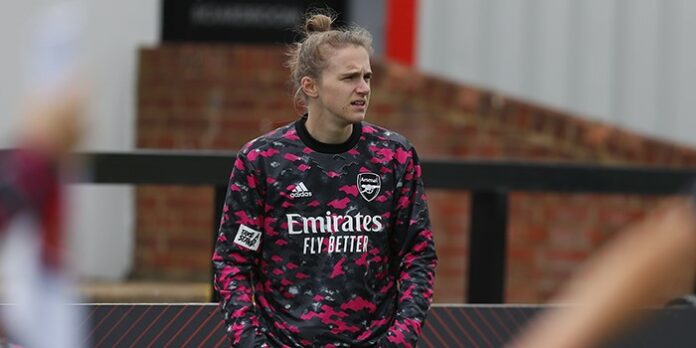 Arsenal play at home to Manchester City on Sunday in the WSL. The Gunners played City three times last season and lost 2-1 on each occasion. It’s a fact not lost on Gunners striker Vivianne Miedema, who opened the scoring in the league game in Manchester last season only to see Arsenal lose the game.

Arseblog News asks Miedema whether Arsenal were just missing an edge, possibly psychological, in all three of those fixtures where they lost by the odd goal.

“Looking back at the Man City fixtures from last season we felt like we were always close and we always felt like we might score in the last couple of minutes to equalise but it didn’t happen and it probably summed up the year we had last year,” the Dutch striker explains.

“Beating Chelsea at the beginning of this season has given us new confidence, I think. We’re really looking forward to the weekend and we want to win the game, that is what we will be going for but we have to see how the game goes.”

Arsenal are under new management with the arrival of 38 year-old Swede Jonas Eidevall, who has taken over the reigns from Joe Montemurro, who stepped down over the summer.

Eidevall has arrived with an emphasis on high intensity pressing and a desire to score more “ugly” goals, alongside the well-crafted efforts from Montemurro’s Total Football style. I ask Viv whether she has noticed the difference, as the team’s arrowhead upfront yet.

“Yes, definitely. Jonas has a wee bit of a different playing style and it still comes with a lot of freedom for me, so I can’t complain about that!

“But there is a change, more of an emphasis on winning the ball back, whereas over the last couple of years with Joe the emphasis was on having the ball, we weren’t as focused on what we do without the ball.

“Whereas now with Jonas he tries to focus on both things and looking back at the last couple of games you can see that we are a bit more direct now.

The 25 year-old is keen to emphasise that she enjoyed a good relationship with Montemurro, “I always had a great relationship with Joe but I think maybe he saw it was time for something else.” However, she admits her role has changed slightly under Eidevall, even if she still enjoys the freedom to move away from the front line to knit play together.

“I know I need to be in the box a bit more now! And as a number 9 that’s what you want, you want the ball in the area. We still need a bit of time to adjust to the new way fully and we have new players who we’ve not played together with that much yet but it’s looking really positive and we hope to continue the form we have been in on Sunday.”

Arsenal play Manchester City at 6.45pm on Sunday evening at Meadow Park. Tickets are available here or else can be bought on the gate for £12 adults and £6 concessions. The game will be aired live on Sky Sports in the UK.

I’m sensing that Viv’s interest has gone up a gear since Jonas got to work. She did look quite frustrated back in February when Joe decided to go following our capitulation to Chelski and Citeh.
I think she was also genuinely surprised by the smashing reception she got from the Emirates crowd on Wednesday.
Let’s hope the feel good continues and Viv does decide to stay.

I hope she gets an Emrites statue. She deserves it already. She is simply that good. Legitimate GOAT argument.

Imagine if she leads the team to a Champions and league double. She should get that statue anyways.

Viv is a sensational striker and key asset to the team but she’s recently turned only 25 so I’m sure even Viv herself would be embarrassed at the talk of a statue at this time. Kelly Smith merits a statue now perhaps whilst Kim Little will soon be deserving of such a club honour.

There are quite a few who merit statues, Jane Ludlow, Rachel Yankey, Alex Scott……

I love that she’s picked up the Scottish “wee” from Lisa.

I think Viv & the whole team are firing on all cylinders! Such an exciting time to be an Arsenal women’s fan!

It will be interesting and I hope exciting to see what Viv and Tobin can achieve together.