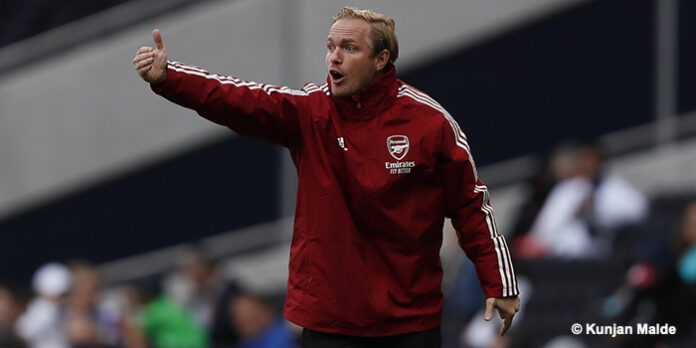 When Arsenal were taken apart 4-1 by Barcelona in the Champions League on Tuesday evening, not too many seasoned Barca observers were enormously surprised. They were 4-0 up inside 30 minutes in last year’s Champions League Final against Chelsea. They are without peer in Europe currently. However, Arsenal boss Jonas Eidevall concedes that he got the approach wrong in Europe’s most challenging game on Tuesday evening.

Speaking before Sunday’s WSL clash at home to Everton, the Swede said, ” It doesn’t feel good,” he confessed in response to a question from The Athletic’s Art de Roche. “I tried to explain to the players after the game that if you look at the football match as a spectrum, where you are being in total control or totally out of control. Most of the times when you’re playing a really good team you would sit somewhere in between. You would have moments of control in the game, then moments when you are out of control and you need to do your best.

“When you’re doing your best, you’re mastering those moments in such an invasive sport like football is. It is about controlling the ball. You can’t use your hands or protect it. You are constantly under threat of losing the ball or being invaded by the opposition. From a motivational perspective, we all like those games where we need to be at our best and then we will be in control. For example, Aston Villa away they tried to sit very low and compact but the same things keep repeating themselves over and over again so from a control perspective, we are very high.

Putellas makes it 2-0 to Barcelona before half-time ✌️

“In the Barcelona game it was the complete opposite to that. We were out of control. It’s a terrible feeling when you’re running around and you feel like no matter what we do, we will come late in to the situation. No matter what decision we take, they will play the ball to the space we leave. It makes it really hard and in football you carry that momentum into the next situation. If that’s the feeling you have when playing defensively, you carry that feeling into offence.

“It’s totally different situations but you still have that perspective of being out of control which means you try not to make mistakes and only play safe passes. You keep looking backwards and you don’t see Arsenal players, you see Barcelona players instead. There are many layers to how we do that better in the future.

“One of them is that even when you come in periods of the game where a team is so good at attacking, you can still find methods to gain control in a much better way than we did. The other thing is that we also need to defend better. You can never defend one-by-one against Barcelona. It is all about how you move as a unit. That’s almost like the final level of defending. We’re not there yet but it really gave us a motivation of why we need to keep the standards so high to compete against the best teams.”

Eidevall also admitted culpability with the game plan, confessing that, if anything, he underestimated Barcelona and their ability to deal with Arsenal’s game plan, “When I say we went into a state of shock that’s me as much as the players. I also didn’t expect it to be that way. But I think this is what happens sometimes in football. To be honest, the way they played offensively, I’ll put my hands up and say I didn’t think they were that good.

“It is the best team I have ever played against in men’s or women’s football offensively. Kudos to them on how they could play with so many different threats and how they moved the ball. It was a big motivation for me in order to come up with a plan of how to deal with them much better in the future. It is a really big challenge which I really like! Hopefully I do much, much better next time otherwise it’s not good enough from me.”

At least he’s honest and not trying to fudge it. The players certainly need to take responsibility, to me, in the first half they just looked scared.

Really like his pressers and post-match responses. Everyone could see that Barca were superior but there were also some questions to be asked of his game management and the cohesiveness of the defense. Glad he acknowledged those points and is going to do something about it (unlike ehrm, another certain manager right now). Thanks for the great reporting as always, Tim!

Refreshingly open compared to any other manager I’ve ever heard speak. Clearly has a secure personality.

To be completely fair he won’t get ripped apart in the mainstream press for his comments and that helps.

Think about how good the Spanish national team is these days. It is very good. Now make it 20 percent better. That’s Barcelona, in my view. This Barcelona team could beat the U.S. National Team–that’s how good it is. They’ve got all the players whose preternatural possession play and skills slice and dice open opponents–and then they have three or more of the best wingers in the world–who are foreign and thus not on the Spanish NT, hence the 20 percent I add to Barcelona’s quality level. They get you chasing the ball around–always late–and then somebody with the ball… Read more »

Thanks Armchair. You totally confuse me. After Wednesday’s game you admitted you stopped watching at half time because our Arsenal team were so poor to be “embarrassing”. Now you are saying that our opponents are 20% better than the Spanish National Team, who are pretty damn good anyway, and that they could beat the USNT! How are we meant to live with that? The fact we kept the score down to 4 was a monumental effort, we did score one against them, Viv should have added another, and a last ditch goal line clearance denied Keets another. I think you… Read more »

Barcelona were quite good but that doesn’t mean that we couldn’t have done better. We should stop sugarcoating and state the facts. Just to say that they were too good and we couldn’t have done anything to change the result, is excusing our performance. We are not bashing the girls but criticising constructively.
As Jonas admitted, we didn’t defend well as a team; he was right. Hopefully he’ll work on something for the second leg.

Please: Your opponent’s level of play and your level of play are not mutually exclusive. The fact that your opponent is an excellent side doesn’t mean that you should get utterly bossed in the first half–especially given that we’re talking about a very talented Arsenal team. Everyone was raving about Arsenal up until this match–and the team was playing very well. If an outstanding team is playing a very good team, one would expect the very good team to /at least/ be competitive, yes? Yet Arsenal weren’t. When a team as talented as Arsenal can’t get out of its defensive… Read more »

Spain were amazing in the friendly against the Netherlands.

I’m a bit surprised to hear Jonas say he didn’t expect Barça to be *that* good, but he’s a smart man from all we see. I echo your hope we’ll be better the next time.

He speaks so well this guy. I think we’ve got a good one here

I just love this man! I’ve said on several other platforms that I think we had the wrong approach in this game. He tried to do what he did against City but Barca is several levels above City (indeed anyone) right now, so when you let them have the ball, they will continue to get creative with it until they destroy you. You have to show some attacking intent, and that was supposed to be our strength. As with every excellent ball-playing team, the defence is always the weakest point of the team. We could trouble them. I think someone… Read more »

Very clear and honest. Well said that man! I’m sure it was a horrible experience for players and coach, but as I said the other day, above all it was a learning opportunity. JE seems to have taken the lessons he needed and I look forward to seeing the results next time we play Barça. (Hope everyone appreciates the cedilla!) In the meantime, let’s get our confidence back and take out our frustration on Everton tomorrow.

He’ll do just fine for us, he seems like an intelligent guy who understands game well and has had a good start to his tenure.