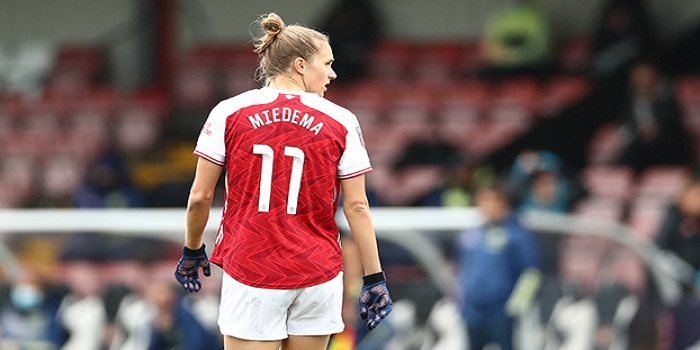 Arsenal striker Vivianne Miedema is on the 20 player shortlist for the Ballon D’Or as awarded by France Football magazine. Miedema is the only Arsenal player on the shortlist after a disappointing season which saw the Gunners finish 3rd in the WSL in 2020-21.

The Dutch forward did, however, score 10 goals at this summer’s Olympic Games for Netherlands, obliterating the previous record for six goals scored in a single Olympics tournament.

The winners will be announced in December. Last year’s Ballon D’Or was cancelled due to covid.

Just give her the award already…

Well deserved. I hope she wins it

Was she? She converted to key penalty kicks–but beyond that what exactly did she do? Canada in the Olympics was all defense and three or four ridiculously lucky breaks on penalty calls PKs. They did the amazing thing of winning three or four straight games in which their opponent was better in run of play. What’s more, Flemming rarely played for her club team, Chelsea, last year. She didn’t even come in late in most matches, as I recall. I don’t think you’ve give this award to a club bench-sitter.

It’s definitely going to be Putellas, no questions. Viv is very much worth being on the podium (I think she’s top 3 in the world right now, at least) but team performances matter in these things and she wasn’t helped by either Arsenal or Netherlands (that defence was shambolic). Someone who could break the Olympics goal record with room to spare without playing a semifinal is pretty special. We definitely need to get her there this year. It’s the least we can do to repay her for her level of performance since she joined. Going deep in the UWCL, winning… Read more »

How many goals did Miedema score in the Olympics? I forget–but it was a high number. Not to mention the fact that Miedema again led the league in scoring. Putellas wasn’t even in the Olympics. Giving the award to Putellas would be a joke: Barcelona is full of great players. The reason that team is truly special is because of their wingers–Martens and Graham-Hansen, arguably the best pairing in the game–not to mention Oshoala and Mariona. Miedema is easily the best player in the world.

Trouble is Viv didn’t lead the WSL in scoring, did she? Viv 18 last season Sam Kerr 21! Viv is one behind Kerr this season too!
What Kerr doesn’t do so well is assist others in scoring.

Always baffles me that she’s never won any of the big international awards like this one. Maybe this is her year? I kind of doubt it tho…. Unfortunately it seems like her down to earth, understated manner might get her overlooked. I dunno, can’t think of what else it would be. And I know she cares more about her team winning, anyway, than individual awards. But I’d love to see her recognized beyond e.g. WSL-only type awards 🙂

If Miedema doesn’t win they should stop handing out the award, seriously. She’s been the best player in the game for at least the last two/three years. And these awards always lag behind reality. Marta was still winning player of the year awards when she was way past her prime and not nearly the world’s best player any longer.

Agree with you on the Marta point which just emphasises what utter nonsense these awards are. Perhaps that’s why Viv doesn’t give a toss about them!

Also on the one player shortlist.