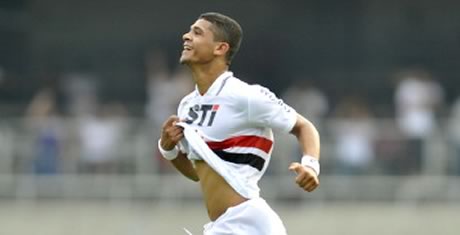 São Paulo says they’re confident that they can come to an arrangement with Arsena over the permanent transfer of Denilson.

The midfielder has been on loan with the Brazilian giants since 2011, and still has another 18 months to go on his Arsenal contract. But, after winning the title there, he wants to stay and continue with club where he started his career.

“We have heard from Denilson that he doesn’t want to return to England, that he wants to stay here with us. I think our relations with Arsenal will help that to happen.”

Although he had been strongly linked with move to Spain in the summer of 2011, with Villarreal said to be very close to signing him, Denilson returned to Brazil and appears to be doing quite well.

He’s picked up plenty of red cards but has become far more important to Sao Paulo than he was to Arsenal when he left. He played a total of 153 games for the Gunners, scoring 10 goals.

Seems he’s doing really well with Sao paolo, good for him. Time to get him back and declare him a new signing?, Nope Arsene don’t you dare even think about that!

I love Arteta, and his passing ability is great, but I’m getting tired of seeing him pass sideways. Me and my mate were saying the other day how the last few games he’s looked more Denilson than Arteta.

Cmon Mikel , get your head up and use your wikidawsumskillz.

that said… he looks fricking knackered. So i will contradict myself and defend him by saying he needs a rest

I have been saying people were always angry how Denilson only PASSES SIDEWAYS, SLOW DEFENSIVELY and CAN’T TACKLE…. Funny enough i found myself many times this season saying the same thing about ARTETA excepts he passes the ball backwards to the defenders even though nobody is marking him. And then i recall this not being said about Denilson until he started playing that defensive midfield role… WOW!!!! What does Arteta give us- possession (which entails distributing the ball quickly to our defenders, midfielders and goalkeeper mostly), Shots from outside (rarely happens now but yeah. just about the only person who… Read more »

Dont they have a ball hungry bare-foot brazilian striker/winger there for us maybe???

osvaldo would be nice. maybe if we throw in left wingback from brazil? 😉

Or how about that Casemiro

We already got Santos!

freaking neymar for santos in an even swap Brazil for Brazil

Feels like he’s been gone for several years and he still have 18 months left on the contract?!

My immediate thought was “he’s still our player?” and then I thought about the time, he, gilberto and baptista were singing together and playing the banjo.

How shit must Brazilian football be if he’s doing we’ll and is a champion?

Deni arrived from Arsenal playing like sh*t, 3 months later he was better and now he is great.

Another case of a player being brought in, told to play in a way in which they aren’t suited, then they turn to crap.

If he is good now I’ll glady have him back .. somebody has to come in this window.

My point is….he is still shite but LOOKS good in Brazil. Any half decent Brazilian plays abroad,….most notably in Russia.

Arseblood, he is not “shite”. I watched pretty much all Sao Paulo games this season and a lot of games with Arsenal before he came back. When he arrived he was exactly the same player that left Arsenal, only passing to the sides, without any confidence and getting a lot of red cards due to bad tackles. Slowly he recovered his confidence and his physical shape and now there are games that he simply boss the midfield. Do you imagine the Denílson that left Arsenal scoring a goal like this in a derby? http://www.youtube.com/watch?v=AGSkXlx9NX4 As a supporter of Sao Paulo… Read more »

Wagner out, anyone with a brain to purchase new signings in.

Said by no one ever!. Ya’ll be hiding under them self-inflicted wagner cocoons.

Yeah and that Johann Sebastian Bach is a bit of a cnut too…..

Fergie the Gooner
Reply to  Desmond

You’re not a fan of his operas and symphonies then? No, doesn’t sound like it…

ClockEndRider
Reply to  Fergie the Gooner

Bring in that Schubert bloke from FC Symphonia. He’ll put the wind up ’em.

ayjay
Reply to  Fergie the Gooner

Wagner just needs to sort out his unresolved issues with CHOPIN over this January transfer period.

yes he came to arsenal as a promising midfielder and didn’t quite live up to expectation but fair play to him. Another player to win a trophy since leaving the gunners, and that’s what players enjoy most.

He came as an attacking midfielder and was asked to play as a defensive midfielder. Thankfully Villa is staying at Barca or he would be playing left back by the end of the season

I am hoping that we will sign Lionel Messi. We can utilise his skills as a left back. We don’t concede enough goals from corners so a shortish non headering left back would be perfect.

Here’s a good deal, they smile sweetly at us, we say that’s a fair swap and we never see him again.

Would he do a better job than arteta? I mean they are both tremendous sideways passers Denilson can atleast shoot when given the chance, Arteta couldn’t do that to save his own life.

I replayed that graham goal for Swansea and
I’m thinking we need an african beast of a DM who can take it in the balls, face just for the club.

Desmond, did you not see Arteta’s brilliant strike against Man City (and at the time possibly the best keeper in the world) last April?

I’m sure Denilson was touted as a more attacking milfielder type when he first came to us. The same for Arteta. It’s not their fault that the manager tries to make them do a job they’re not ideally suited for, be it a lack of ability or another player higher up in the pecking order (Fab first and now Wilshere).

Saying that, if Denilson came back. i’d cry and start licking windows.

Remember the goal from a longshot against city and a powerful free kick against Astonvilla.
http://www.youtube.com/watch?v=k2rlaCPptQU

In his last season at Arsenal, Denilson had 0 goals and o assists from 32 games

Hopefully, Desmond, you have also noticed that Arteta has been deployed in a deeper lying role this season and is therefore likely to shoot less. Fair enough, he hasn’t set the world alight in recent times but it’s not his natural position so try to keep things in perspective mate.

A load of crap is what that he is. So when you’re a deeplying midfielder and find yourself with enough shooting space, you’ll instead pass it to the wings?. This thing he often does it and it’s really annoying. Come to think of it though, seems not enough of shooting is encouraged in trainning. Boils down to wenger and his tactics yet again.

Pong of the OxCoq
Reply to  PGUNNER

Desmond… You been watching Tiote?

Apart from his side passes, back passes and his millipede-like tracking back i think Denilson ℓ̊s a decent enough player. He’s just Lℓ̊kε̲̣̣̣̥ Xavi(I know he’s an ugly thing to have).

Djourou, Diaby and Denilson…….Three players ( that sum up Arsenals transfer and wage policies over the last six seasons and why we have won nothing holding on to average, crocked and mediocre players. All of these wastes of space were being paid 50 to 60 grand a week. Get rid of the dross!!!

Maybe only sign players who’s name start with the other letters in the alphabet?

Whateer happened to Igor Stepanovs?…Oh dear! I gave myself a headache mentioning that name.

Let’s have him back? Just kidding! One thing worth mentioning though (and this doesn’t mask his horrendous deficiencies), he was crucified for jogging back for some counter that turned into a goal – that was very much used as a stick to beat him with and drive him out of the club. But we’ve seen some of our midfielders and others do that a few times since – this season I can remember Wilshere doing it at least once – and the fans’ reaction has not been of the same severity. A bit of hypocrisy. Having said that, I wouldn’t… Read more »

Tons of hypocrisy around here, players are judged more on their popularity than their skills.

Denilson played the second most games for Sao Paulo last seaon, I doubt that is because he sucks. He would probably be a stronger option off the bench than Coq, who can’t get much game time as Wenger seems to want Arteta to play every minute of every game.

I would rather play Coq who can be a very good player then him. Denilson sucks!

Bit of a double standard. Denilson would be stronger off the bench than Coq? Possibly due to the fact that he’s several years older, played as a first teamer at Arsenal for years (to the disgust of many supporters) and was sent out on loan to a league where he’d play more games. That’s before I’d even admit it’s a certainty. I’m not really sure what your point is.

Although, I do agree that Arteta’s being overplayed.

That’s one of the things I dislike about some aspects of our fandom.

Once a player gets marked down as “bad” in some peoples minds, they could score all 9 goals in a 9-1 win and half the fans would score them “0 out of 10 – should have tracked back for the goal we conceded”

Well, good for him I suppose.

How is that we gave a contract that would secure a player financially for the rest of his life to someone who obviously lacked the talent to actually play for us?

Madness, it´s madness I tell ya!

Denilson is capped at all Brazilian youth levels as captain and is now forging a successful career for himself for a good team in a very competitive league.

and people say he is “Shit”

Lol so true!
Honestly we are the only team that can turn Messi shit, 1 season with us & Ronaldo will win the ballon d’or.

I know I’ll get shit loads of thumbs down but there’s no denying there’s some truth in my statement.

Arshavin, Baptista, Denilson, Gervinho, Ramsey, Squillacci even Cazorla seems to have gotten worse, surely it’s no coincidence!!
Or is it?!?

Wow, Christmas came late this year! Now if only Arsene will use some of our money and finally buy some players!

How hard is it to come up with “an agreement” ? He’s valued at X, you offer us 75% of X and we accept it and are finally rid of a player who’s never gonna play for us and frees up his wages.

not being funny, but where the hell is some signings? doing my nut in

Bring back Ian selley I say!!!

Are some of these Arteta comments serious?! He’s praised for his service at Everton. He makes play better when he’s on form. Composed on the ball… Denison had a handful of good performances at best. Playing out position is not a good enough excuse for being rubbish… Good for him but he can stay there…

[…] This story on Tuesday morning reminded fans that Denilson is still technically an Arsenal player. Even though he hasn’t pulled on a red and white shirt for a year and a half and lost his squad number as soon as Alex Oxlade-Chamberlain arrived. A permanent suitor is yet to be found. Hopefully reports are right that Sao Paulo are willing to snap him up. […]