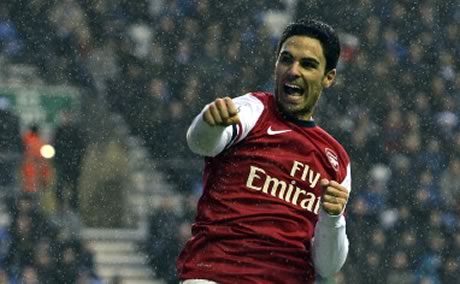 Everyone knows what it’s like. You’re trying to get somewhere and you’re stuck behind an old Ford Escort, driven by a man with glasses like Junior Soprano with his wife, who can barely see above the dashboard sitting beside him sucking a Werther’s Original.

That was Arsenal against Aston Villa, according to Mikel Arteta. Ok, he wasn’t quite as evocative with his imagery, but he says the two cup defeats led to a much more cautious Arsenal performance.

Quoted in the Mirror, he says, “We were nervous because we had absolutely to win. We twice hit the wall in one week. When you drive a car and you hit first time and have an accident at 100mph you say, ‘OK, we go again.’

“But when you hit it again three days later you will drive a little bit more cautiously and that’s exactly how it is. Confidence is our best friend and lack of confidence is our worst enemy. Both of them are very fragile.

But the vice-captain was happy with the spirit shown in the end which was enough to gain a crucial three points.

“We are ready for a fight and we are ready to fight for the football we love to play.

“We were focused and determined, and even when it was 1-1 and with not a long time to go,  I couldn’t see anybody with their head down and giving up. The team kept going until the last minute.”

The Spaniard also praised his countryman, Santi Cazorla, whose two goals won the day for the Gunners.

“He helped the team to earn the points today. He was outstanding – his overall play as well. He was involved in many areas of the pitch today and he’s a top player. He’s played almost every game and is probably the only one.

“The way he plays, he takes a lot of knocks and plays a demanding game physically as well. To adapt to the Premier League in his first year and do what he’s doing, I think we have to clap him. He deserves that.”

I don’t think there’d be too many this morning who wouldn’t give Santi the clap. We can think of no higher compliment.

A vehicular based Arsenal story with no mention of the fuckin handbrake. There’s a thing.

I think it was Wenger that compared the losses to car accidents.

As well as having the obvious cunt gene, all have claimed they’re better than us, stronger squad blah blah.

You’re not. You never will be. You’re shit on our collective shoe. You won the league in black and white. We’ve won the league more times at your shithole than you have. And, we’ll finish above you. Again.

The Leeds fans got it right recently when they sang ” youre just a shit club near Arsenal! “

@North Bank Gooner, never heard that before, made my day :p thanx bro

You can accept it, I never will. Even if we go down to the Blue Square premier I will not agree.

Biter truth? Are you suggesting that Sp*rs are zombies?

Gunner From Another Mother
Reply to  arseblog

I thought it was a luis suarez type truth

I’ll accept that Spurs are better than us on the day they win the league at the Emirates, sign our captain from us and go on to win the double, and finish above us for at least 10 seasons on the trot. Until then – a certain monkey boy needs to pipe down and get back on his tyre!

Spud detected. All the signs are there:
– Spells Sp*rs without the *.
– Can’t spell generally.
– Thinks the scum are better than us.

If I listen to you correctly, we are the underdogs. But I trust our quality, spirit and mental strength, so see you on sunday!

I just looked at the fixture list and I think Arsenal can make it into 4th, if not 3rd. Both Chelsea and Spuds have more difficult games but Arsenal will have to get their act together and go on a bit of a winning streak.

The team really needs some confidence, more than I have at least….

Fergie the Gooner
Reply to  neutral

They’ve got to play eachother as well, so they one of them’s going to drop points. We’ve got a tricky run with Sp*rs, Everton and Swansea, but if we can grind out a few more results we’ll be in a much stronger position!

mike
Reply to  Fergie the Gooner

True, but bear in mind from chavski point of view us and spurs have to play eachother too. with a bit of luck, and a lack of retarded refs we not only can, but SHOULD make 4th

This is so true. The spuds have a terrible run of fixtures ahead… in fact, one that looks like just the kind of thing that, if it were our fixture list, would cause us to have a dodgy draw and a loss at the start of it and then take 4 points from 8 matches or something like that. It looks a bit like what they were facing when they imploded last year and also a bit like what we’ve faced when we’ve implode nearly annually in several recent springs. I think that if we get a result next weekend… Read more »

How big is that Spuds game, eh? If we just dig in, get real ready over this week and come out fighting like the Gunners we are, then we can well and truly kick them into a big fall here and use the momentum as we did last year! COYG….

If you got a wall while driving at 100, you say hello god, I’ll be staying with you for a while!

We are talking about fast cars .How must Andre Santos be feeling now he is
not here?

Don’t worry, i’ll get my own coat…

The only way spurs is better than us is that they’ve defied all odds and trainned a monkey who can score goals.

I hope that Jack shows the chimp what world class is I hope as a team we put a few past them to show the Jose wanna be manager that he is shit as well and I hope we show all the mugs that last year had fun taking the piss out of us when we where 10 points behind what a great club Arsenal is. Lets face it when you choose a team that has a cock on a ball as its emblem you really have to question the mentality of the supporters. Now boys handbrakes off, speed camera… Read more »

Big performance required on sunday. It’s time to give them spuds a lesson in superiority.

Soooooo, uhmmm why is Vermaelen the captain of this team again?
Clearly it should be either Arteta or Wilshere no? I know Wilshere is a bit young, but he is the one to push, pull, guide and give his own team a kick up te arse when needed. Or vice at least, but not Vermaelen.

IamsterdamHammers for 90min tonight. Then we consecutive beat Sp*ds and Everton, after wich they loose to the scousers. Oohh jolly joy !! 😀
Come on you Gunners, come on !! Up the Arse !!
Hate to love you sometimes tho!

I think there might be a few converting to Wet Spam for the day.

Can a Walrus tame a Monkey, will a gooner stuff the spuds for the hammers?Come on Fat Sam, make it just a point before the biggun!!!

a gooner in Manchester
Reply to  IamsterdamGooner

Save it for another day. The season is hitting its climax and total concentration on the football we have is required.

Time to get behind the team, unequivocally.

I am positive that they (spurs) are really deluded. Putting aside the fact that we are just better than them, last year we beat them 5-2 and again this year. We finished on 3rd last year, they in 4th after we cut out 10 point gap. So we are better…. Anyway, with the derby coming up why do they start with the taunts again? It would only serve to get us angry, so keep saying it please. As for adebayor, coming 3mobths late to spurs after ACON, sane old sane old. We do have to be on our guard tho,… Read more »

how about a bite of me spurs? But before
PREPARE YOUR ANUS.

have u been tested for horse dna?

Look at the name, lasagna, spurs vs ham, ring any bells?

Horse meat being in beef products like lasagna is currently in the news, ring any bells?

Would be nice if fat sam for once could do something good and beat the cunts tonight, that would be terrific.

At the very least, wipe some of that hairgel of yours into that monkey’s arse and light a match.

Sp*rs fans are a bunch of chavs who have been disowned by their mothers.

All I want is a sp*rs trashing..

I teach my 6 yr old not to use the word ‘hate’ and that football is about winning with grace and losing with dignity. I’ve not yet told him that this is utter bullshit when it comes to that bunch of cunts with a chicken on their chest down the road. I’ll never forget their fans goading us as they went 2 up last season, only see their faces as the 5th went in. If ever 90 mins gave you the meaning of what it’s like being a football fan that was it.

This guy
Reply to  Midfield Corporal

Just a matter of time a very short time, he will understand the whole concept himself.

Third is within our grasp, we just need to avoid our own traditional end of season implosion whilst watching Spurs do theirs. Chelsea look to have already started theirs, 8th in the form table whilst we’re 2nd.
Also, isn’t a bit odd that a supposed North London team last won the league when they were in Middlesex?

im a young gooner tbh. but didnt Arsenal actually start in woolwich as an Ammunition Workmens team or something like that. Thats why spuds hate us and vice versa as we moved onto their manor and tore it up, and bummed their mothers ever since? If im wrong please educate instead of hating on me. On to another point, but i think in recent seasons, after our mid season collapses, when under less pressure, we go on a pretty good run till the end. So, to the spuds fans i say, il see you at the end. Its not how… Read more »

Anyone notice the STD pun toward the end? Give Santi the clap!

Just a point about the Swansea game coming up,great time to get them.
They’ve just won the cup and are comfortably mid table…they’re on holiday already.

Spurs are better than Arsenal…..how? If it were a competition of what team has more cunts than yes you would be better. So fuck off to your Batcave Bale you prick

Fierce rivalry is great there is no need to hate.
Spurs and Arsenal are essentially the same people.

Err.. You might be a chimp looking, cock on your shirt wearing cunt.. Leave the rest of us out of it.