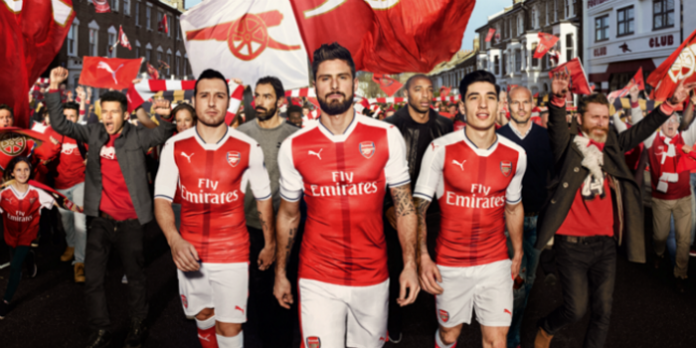 After months of leaks, Arsenal have officially unveiled their new Puma home kit.

The shirt is red and white. The shorts are white and red. The socks are red and white. All of which comes as a relief. There’s also a marketing tagline – “We are THE Arsenal”

Puma say of the design: “With renowned red body and white sleeves, this season’s kit remembers the transformational years of Arsenal Football Club, inspired by players, managers and moments from the 90s.”

We think that translates to: “A celebration of those years when Arsenal were god-awful in the league but won a load of cup competitions thanks to Andy Linighan, Steve Morrow and Alan Smith.”

There’s a weird dark red stripe on the front of the shirt; a detail we suspect represents the split in the fanbase.*

If you have a six-pack (LOL), you might like the ‘player performance’ version of the shirt, it’s really skin tight and will show off your muscles.

If you don’t have a six-pack, you could always sport is as a Spanx-like undergarment – a sort of corset for our age.

If you play in goal for your pub team, you might want to swerve the shirt that Petr Cech will be forced to wear. It seems to have been inspired by the BBC test card.

The Arsenal Ladies team will debut the new home kit on May 26 in the United States when they play a friendly against Seattle Reign at the Memorial Stadium. The home replica kit is available for pre-order now via the official club shop.

*This is total speculation on our part.

A nice top, but not sure about the vertical stripe in the middle.

I’ve seen the away kit that was leaked. That looks great!

I’m glad Sanchez is now in the TR7 shirt. Hope he makes it his forver as Lexy7.

I often have a stain there anyway from the beer that dribbles out of my mouth. So this design is kind of perfect for me.

Who’d have thought that – red with white sleeves!

Good to see Sanchez has number 7 now, I’m taking that as a sign he is happy at Arsenal.

Encouraging that Santi appears to have grown since his injury and that Pires, Henry and Freddie have their backs in the picture above.

Pretty sure that’s their faces.

The one of the right has nicked his beard from Roy Keane, not a good look really…

that ugly stripe though :))

What the fuck is up with the dark red stripe in the middle.

Is this part of a new sponsorship deal with Red Stripe? 🙂

I think they’re cleverly made so the sweat flows in a straight line although it does flow to an unwanted place.

Ingenious by Arsenal and Puma.

There’s the new common injury for next season then. Cock eczema.

It’s a great shirt apart from the stripe in the middle. Looks like they’ve been dribbling down themselves. I’ll give this one a miss.

When the rest of the shirt is the same colour as the stripe the player is to be substituted.

A “pregnancy test” of sorts… when the shirt is the same colour as the stripe, the player has reached the fabled *red line” and will spend the next 9months with the medical team… cue hours spent doing pilates, lamaz classes and (in the case of RvP) horse Placenta treatments…

Is Igor Stepanov in that picture?

I’ve been told the stripe was a specific request from Wenger, a kind of ‘laser sight’ to help the players line up their shots properly.

I thought that was Chuck Norris.

Have you ever seen them in the same place at the same time??

I say bring back the blue and white socks!

I see Giroud will spearhead our attack next season aswell. 😛

Not sure about the stripe, But I think the away kit looked really good this time around. Those Gold shirts of last season wad beyond horrible.

“Divide in the fanbase”. Well said. ?

Could do without the stripe otherwise it’s a lovely kit.

Lets hope we get an alternative to Giroud to lead the line in an arsenal jersey.if only those lads behind him were still playing…

The stripe reminds of St George’s flag, it’ll grow on me.

Yeah, except that without the requisite horizontal bar, it’s just…a line.

Looks like the designers were well boilked when they came up with this one. Still, I suppose I’ve got to give credit to Puma, they’re certainly consistent with their boilky designs.

The stripe probably represents Wenger’s eternal battle with his zipper

Am I the only one that likes the goalkeeper’s shirt?

You are both the same person…
?

I think I just found my new wallpaper

When is the ACTV technology going to be introduced for condoms?

If you don’t have a six pack but sport a two litre or a mini keg what should you get?

If you do have a six pack and arent a professional athlete, what the hell are you doing with your life???…. theres beer and food and women and you wont have energy if you starve and ponce around in the gym infront of a mirror…

Not sure about it to be honest because of the vertical stripe. Looks like someone’s dribbled down the front of it

When the stripe in the middle turns blue, the player is pregnant.

One day I will have a six pack.

I just finished mine.

There’s always one or two small things I don’t like about these puma kits.

Kind of like how we’re always one or two players short. Can’t be coincidence…

The stripe is a leak.

What great players we had . Makes me feel warm and happy inside , great memories .

Bad the odd Stripe idea , I like this . I also love the red socks . Just a personal preference of mine