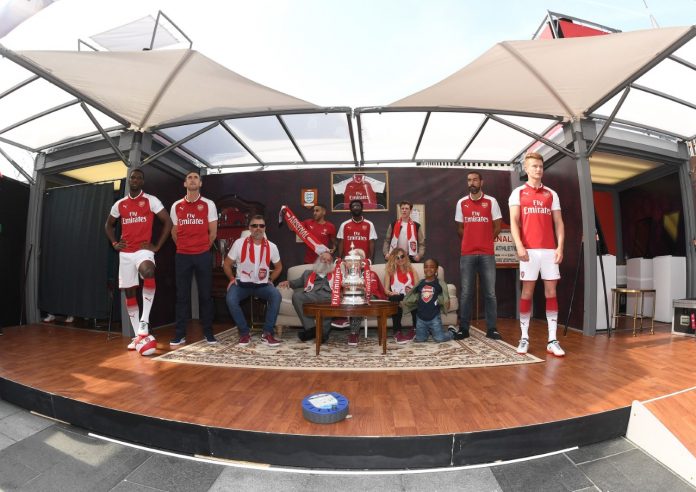 Arsenal launched their 2017-18 home kit in Kings Cross this morning. Martin Keown was on hand, alongside Robert Pires, to bring the curtain down on proceedings. Tim Stillman went along for Arseblog News and spoke with the three time Premier League and three time FA Cup winner.

When most Arsenal fans think of Martin Keown, they imagine him towering over the prone figure of Ruud van Nistelrooy. Even if a little reductive when considering his overall contribution to the club, it is not a bad image to be remembered for within your own fanbase, despite what the pearl clutchers might tell you.

Keown is a familiar enough presence in the media for us to appreciate that his off pitch persona is somewhat at odds with the snarling, eye bulging ball of energy we remember in an Arsenal shirt. Martin is erudite and thoughtful, but his words still carry the intensity that we associate with one of the most, ahem, “competitive” Arsenal players in recent memory.

Keown’s on pitch influence at Arsenal was obvious, what was less visible was his off pitch contribution. During the 2005-06 season, Keown returned to London Colney to take his coaching badges and helped to coach a defence that kept ten consecutive clean sheets in the Champions League. When I ask him about this period, Keown is modest about his impact.

“I was there, yes. You’d have to ask the people involved how significant my help was!” he reflects. “Arsene Wenger asked me to work there when he knew I was doing my badges, so I worked there for the whole season. I worked Monday to Saturday with the team right up until May 2006. I helped Pat Rice with the defence and thoroughly enjoyed the experience.”

Keown is a little more circumspect about coming back to the club in a coaching capacity in the near future, “When you work in the media, you’re almost on the dark side. If I was asked to return it would be difficult to turn down, but things took me away. I played till I was 38 and went straight into my coaching badges when maybe I should have taken a break.

“I like working in the media and talking about other people’s successes, but I really like to work with people to achieve things, so let’s see what the future holds,” Keown says thoughtfully. On more contemporary defensive matters, Martin is a fan of the back 3 system that Arsenal reverted to in mid-April and thinks Arsene should retain it for next season.

“The Premier League and the FA Cup have been won by teams with a back 3,” he points out, “Football is a numbers game sometimes and a back 3 gives you that bit of security. In the past, with a back 4, Arsenal players have gone flying forward and that’s left them very exposed to the counter attack.

“Now a player like Ramsey for instance can afford to get forward and that’s how he won the cup for us. I think it suited Oxlade-Chamberlain too, suddenly he became a more assured player. Then you look at how Mertesacker came into that Cup Final in the system after only 37 minutes football all season. They should be calling it the Mertesacker final. I wouldn’t have thought Arsene would want to change the system, I think he needs to build on it.”

As a centre half of some repute himself, Keown is enthusiastic about the role 21 year old Rob Holding can play in the system, “I’ve been really impressed. He’s quietly understated and doesn’t get ruffled by anything. He’s very calm in possession and uses the ball well. He really benefits from being in a 3.

“When you’re a young central defender, it’s nice to have that extra player around you and his positioning is already very good in that formation. When you consider City paid upwards of £50m for Stones and Arsenal paid £2m for Holding, that’s another exceptional piece of business from Arsene Wenger.”

Martin also believes that the door remains open for Calum Chambers at the club, after a loan spell at Middlesbrough, “If Arsenal play three centre halves that means there could be chances for him. I think he looks very suited to that system. Arsene tends to keep faith in younger players, the issue might be if other clubs come in for him, does the player want to hang around if he can start somewhere else?

“He’ll have watched the FA Cup success from afar and been a little envious, but we’ll have to see what ambitions he has now. He seems a very well balanced guy. There was a little debate as to whether he was a right-back or a centre-half. In a back 3, he might find that balance and Wenger might have a plan for him.”

Keown believes the popularity of a back 3 and wing backs will make centre halves and full-backs a much more sought after commodity on this summer’s transfer market, “Right now, people want centre halves and wing-backs,” he says, referring to the signing of Sead Kolasinac. He also thinks the adoption of a back 3 will help Chambers, Holding and other young defenders to integrate more comfortably into life at Arsenal.

“Arsene wants his full-backs to get forward. I think young defenders have had trouble taking on board the message from Arsene Wenger because his glass is very much half full. So he wants to give his players a sense of freedom. There’s more defensive balance in this system, in the previous one, there were too many people partying and not enough minding the back door!” he laughs. “I think the change was a really good call from Arsene Wenger,” Martin concludes.

The new Arsenal home shirt is available for pre-order now and available to buy in store from July 3rd.

With thanks to Greg Johnson, Chris Wheatley and James McNicholas

If Keown is responsible for that insane defence in the 06 champions league, arsene should just sign him up RIGHT NOW.

Get him coaching our defence.

Love holding. Him telling Costa off made my day.

Keown back in please… and per to join him in a years time, please.

Should’ve asked him about Per’s comments after the game. Keown is an honest guy so I think it would have been a good opportunity to draw a line under it.

” I actually did. Which was daft considering people wrote me off as I aged. Good on Per for proving me wrong. As an Arsenal fan, this outcome was a welcome one.”

Or something along those lines.